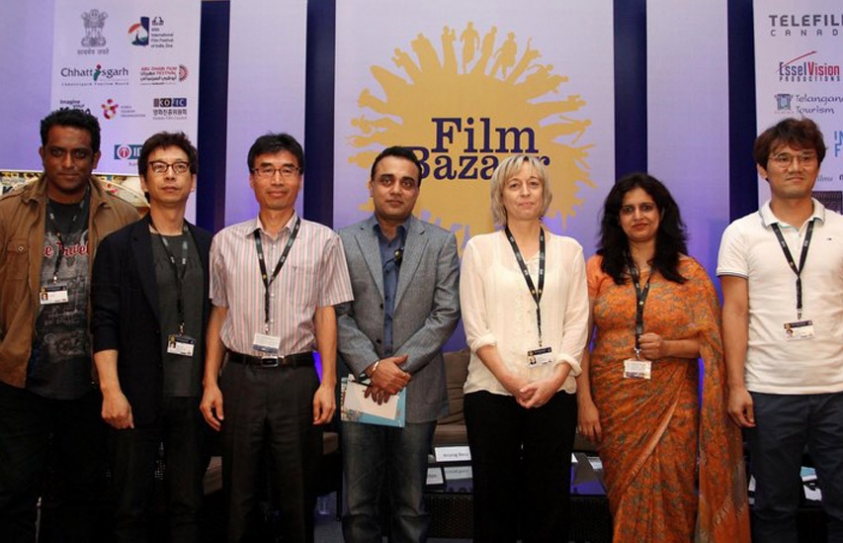 Goa, Friday, November 21 2014: National Film Development Corporation (NFDC) is back for the eight year, with a bigger avatar of its flagship event, ‘Film Bazaar’. Film Bazaar bridges the gap between the international and South Asian film fraternity through discovering, supporting and showcasing Indian and international content, in the realm of filmmaking, production and distribution and enables exchange of ideas and signing of contracts.

Film Bazaar has curated the Producer’s Lab section with an aim to offer independent Indian producers a chance to hone their skills to better interact and collaborate with their international counterparts. The lab on Day 1 had a variety of experiences in store for producers and film companies when producer Karsten Stöter’s shared his views on the ‘Role of a Producer’.

Viola Fügen, Co-Productions, The Match Factory during her session on ‘Working with International Co-Productions’ emphasised on finer nuances of international co-productions. Screen writer Urmi Juvekar shared a pertinent perspective on ‘Development – Working with Writers and Directors’ in conversation with Marten Rabarts. The Producer’s Lab drew to a close today with a session on ‘The Trouble with Youngsters’ with Ashish Patil, Business & Creative Head and VP: Youth Films, Brand Partnerships and Talent Management at Yash Raj Films.

With a view to addressing other areas of the film business, some new sections such as Film Offices, Romance Screenwriters Lab, Investor Pitch, WIP Documentary Lab etc have been added that NFDC is focussing on this year.
The Viewing room this year also includes the ‘World Cinema’, a section that has brought an array of internationally acclaimed foreign films looking at distribution and sales in South Asia, while the ‘Available for Remake’ segment as the name suggests is showcasing Indian and foreign films that are available for modern-day remakes.

Some upcoming productions presented in the Co-Production market include Mira Nair’s film ‘Three and a Half’, ‘Interpreter Of Maladies’ directed by Amitav Kaul based on an award winning book by the same name and a mystery drama titled ‘Judgement’ by Pakistan’s acclaimed director Sabiha Sumar.

According to Nina Lath Gupta – Managing Director, NFDC India, “Film Bazaar is NFDC’s flagship initiative and it has been our aim to create a one-stop destination for the entire film fraternity that will help to germinate and grow ground-breaking content and co-production opportunities. This year, we are committed to address a variety of stakeholders involved in the film business.”

The networking lunch today was hosted by the Chattisgarh Tourism Board and the networking cocktails by Essel Vision Productions at the Marriott Resort, Goa.

Gulzar Saab, Manoj Bajpai, Anupam Kher and many more were present today at the Film Bazaar 2014.