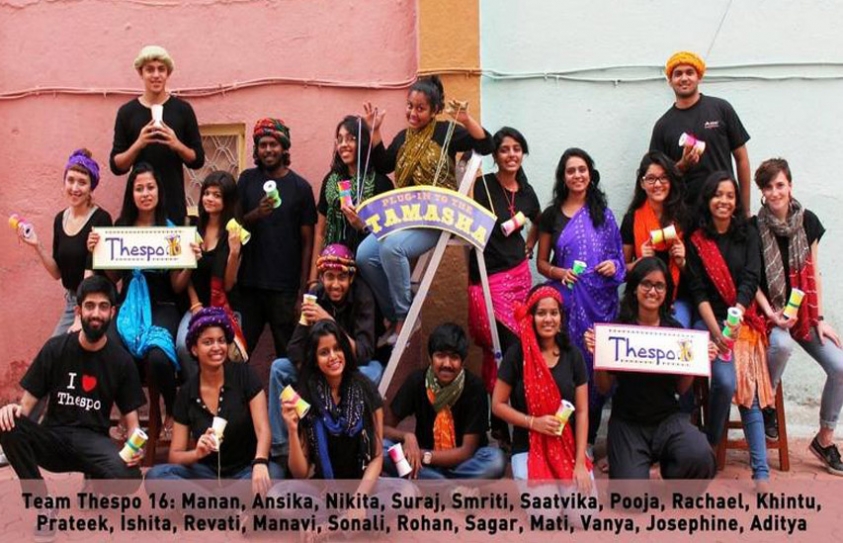 Thespo 16 all set to wow theatre lovers once again

Get ready to fall in love with theatre all over again as the 16th edition of Thespo, the annual drama festival for theatre-wallahs below the age of 25, is back with a dramatic bang.  Taking place from 15th to 21st December 2014, the festival is centered on the theme ‘Plug-In to the  Tamasha’.

​INTERNATIONAL: ​
This year, Thespo has scoured through a record total of 186 entries from across India, Sri Lanka and Canada, to curate a fresh bouquet of 6 full-length plays, 6 platform performances and 7 fringe performances.

​TWO VENUES: ​​​
Organized by QTP, under the aegis of Theatre Group Bombay, it will be taking place in two venues this year: the iconic Prithvi Theatre, which has been the home of Thespo since 2008, and Sitara Studio, the city’s latest indie cultural space that used to stage Marathi plays back in the 1970s.

With its mission to attract the youngest, freshest talent from the theatre world, Thespo 16 is all set to excite, entertain and enthrall with its full-length plays. This year, all the five final plays of this year’s competition are of regional languages including Bengali, Hindi and Marathi. Covering themes ranging from social injustice, urbanization and mental disorders, the festival’s plays stay true to its tradition of creating an eclectic, diverse viewing experience.​

Stay at the edge of your seats with Mumbai- bred Khushboo Upadhyay’s direction of ‘Normal’, Anthony Neilson’s gripping account of German serial killer Peter Kurten who was convicted in 1931 for the murders of eight people. Or if you prefer a light-hearted comedy, ‘Tambola’, written and directed by Kolkata’s Akshay Kapoor, follows three ordinary men who carry out an extraordinary crime of robbing a bank while fate plays a nasty game with them. Apart from those, another one to look forward to is the guest piece ‘Falls 2-11’, the brainchild of Clerke & Joy, a creative duo from Bristol, UK, created in collaboration with Thespo 16, that inspires us to think about the idea of falling and giving in to gravity .

THE PLATFORM PERFORMANCES
At Thespo 16, you can watch the magic of theatre come alive on the spot with its spontaneous platform performances. Look out for ‘Happy Ending’, where the protagonist takes matters in his own hands, literally, as things go awry, to ensure he gets his happy ending. Also, there is Bangalore’s ‘TRP Ka Zamana Hai’, a critique of the Indian media, the fourth pillar of democracy, which to them is in the business of making rather than breaking news, and Delhi’s street play titled ‘Hum Ghum Ho Gaye’, that gives voice to the marginalized nomadic and de-notified tribes of India.

THE FRINGE PERFORMANCES
Of noteworthy mention is the ‘Violence Against Women Project’, conceptualized by Gillian Clark, an interdisciplinary Theatre Artist hailing from Halifax, Nova Scotia. It will mark two years since the Delhi Gang Rape with a cross-cultural discussion on the meaning of sexual violence against women in urban India and Canada.

It will include a film screening in association with Alliance Francaise Bombay of ‘Ariane Mnouchknine- L’ Aventure du Theatre du Soleil’ (1974) and dramatized play reading in association the Goethe Institute where Daniel D’Souza, a young director, will create a short  performance from plays of Roland Schimmelpfennig under the mentorship of Ramu Ramanathan.

THE WORKSHOPS​​
The legendary lok shahir Shambhaji Bhagat in his workshop ‘A Musical Rebellion’, to talk about the bond between music and theatre and recounts the history of protest theatre in India The Actor’s Tool Box, an acting workshop by Glenn Hayden (hailing from Australia with 28 years of working with and creating theatre for youth) and Kyla D’ Souza (from the legendary Lee Strasberg Theatre and Film Institute), is designed for actors to discover, explore and maintain their ‘box’ of acting tools.

An Actor’s Foundation, which offers a peek into an actor’s inner emotional life and how to effective wield the instrument of body movement under the guidance of Jeffery Goldberg Magic Hour, a theatre lighting workshop and ‘Creating a Make-Believe World’, a set design workshop by Vivek Jadhav

You can sway to the acoustic folk and soft rock sounds of  Shubhangi Joshi, a Mumbai-based singer-songwriter and guitarist, or enjoy as Pune’s  Meera Shenoy croon her favorite folk/ jazz/ blues numbers or tap your feet to the tunes of bass guitarist. Vivek Date and watch out for Indo Gypsies, one of the most prolific folk/ fusion/ world music bands from India, who seamlessly blend folk with many genres and captivate audiences in their vibrant attire.

For information on the complete schedule of events, ticket prices, etc., please visitwww.thespo.org.