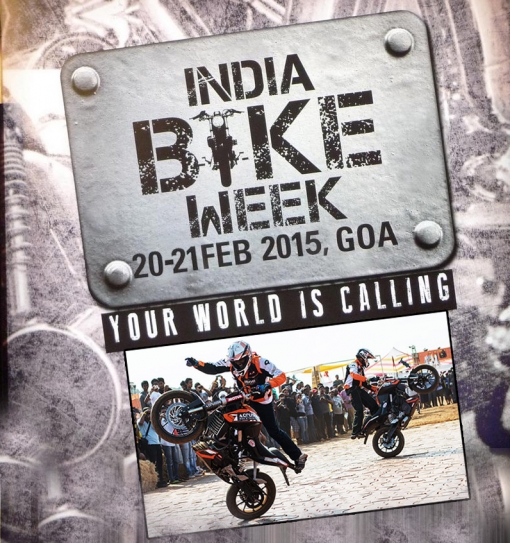 Mumbai, February 2015: The third edition of India Bike Week will see an impressive lineup of 20 music artists that are going to perform at the festival. Organized by India’s largest festival planners the SEVENTY Event Media Group, together with the #1 Travel and Lifestyle channel, FOX Life, ​​IBW will be held in VAGATOR, Goa on 20th& 21st February 2015 and over 10,000 riders and bike enthusiasts are expected to ride cross-country to Goato celebrate the spirit and lifestyle of the Indian Biking community.

There will be 5 music stages– The DSK Benelli Rock stage, Ace Café, Howling Dog bar, Red Bull stage and Jameson headliners on Main Stage headlined by Baby Head a live phenomenon in the clubs and on the festival circuit, rocking UK stages from Glastonbury to fabric and worldwide from New York Fashion Week to Thailand’s Smileyfest.

Martin da Costa, CEO of 70 EMG had an interesting comment to make when announcing the 20 artist music lin-up  as part of IBW“Music is one of the most explosive expressionof humanity, riders across the world speak the language music and it will be one of the most solid magic at India Bike Week”

Brief profile on artists performing at India Bike Week 2015 is given below:

DJ Akhtar – is currently amongst the top three DJs in India since over two decades. He is one of the pioneers of mainstream commercial dance music in India.

Nucleya– started his musical journey towards the end of ’90s when he co-founded BandishProjekt. Since then, he has released 14 singles, studio albums and numerous collaborations.

Babyhead – Born out of love for Jamaican Sound Clash, Forged through a do it yourself punkrock ethic and delivered with raw hip hop swagger, the unstoppable babyhead sound is drawn from all quarters of the musical universe, in the true Bristol fashion. They have recorded three studio albums. The Third “HEAVYWEATHER” was released in 2010 on rockers revolt. They have been a live phenomenon in the clubs and on the festival circuit, rocking UK stages from Glastonbury to fabric and world wide from New York Fashion Week to Thailand’s Smileyfest.

Curtain Blue – Curtain Blue is the solo project of Abhishek Bhatia – vocalist of New Delhi based band, The Circus. Since the launch of his project in late 2013, he’s been consistently fusing haunting vocal melodies with downtempo and bass sensibilities, aiming to create a textural blend, which can uniquely be called his own.

DJ Uri – With a career spanning over 4 decades, DJ Uri has been true to the Hip-Hop movement. Born in East London in 1974, his journey has been in full flow since 1982. Influenced by the “Street Sounds Compilations” and the break dance era, Uri has had a solid upbringing being exposed to underground music from an early age.

Frame by Frame – They bring a fresh innovation to the sound, combining a kaleidoscopic arsenal of the smooth, crunchy, melodic, synthy, dirty and raw, channeling hip hop, D&B and bass music sensibilities into a pedigree all of his own. Recently, Frame/Frame has opened for American glitch-hop heavyweight Michal Menert, played at NH7 Weekender, Magnetic Fields Festival, and played alongside local artists such as Robot Koch, MidivalPunditz, and more.

OX7GEN – Aditya Ashok has emerged as an inquisitive and versatile drum and bass producer. This year, he brings to you – OX7GEN Live : a collaborative experience presented by various musicians that weave together a seamless live drum and bass set exploring rhythmic energy and dynamicist.

Siddharth Basrur – Indian vocalist, composer and a playback singer. 12 years ago, he entered the indie music scene with his first band, Kinky Ski Munky. Over time he has worked with various bands spanning a variety of genres, ranging from acoustic and metal to punk and electronic.

For more information on IBW log on to: www.indiabikeweek.in or www.facebook.com/indiabikeweek