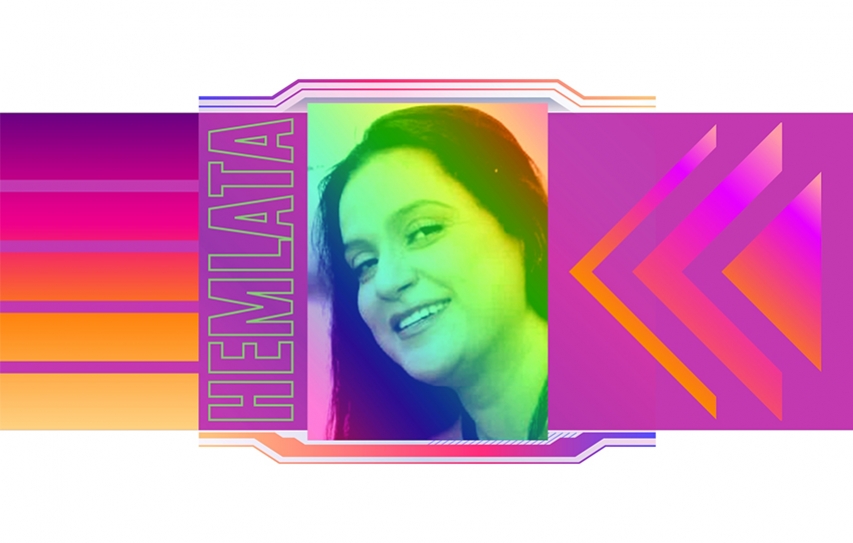 Film historian Dhruv Somani, tracks the once super-successful career of the underappreciated playback-singing career of Hemlata, who inexplicably quit the Bollywood music scene.

Hers was the mellifluous voice singing Ek Din Tum Bahut Bade Banoge Ek Din in the super-hit Ankhiyon Ke Jharokhon Se (1978). Little did she know that she would become a prominent name herself in films during the 1970s and the ‘80s? Hemlata began her career when she was 14. Lata Mangeshkar and Asha Bhosle ruled over the music scene then. Yet against all odds, she could establish a distinct identity. In fact, Lataji was her idol; she had good words for the teenager’s voice.

For over 25 years, Hemlata rendered over 5,000 songs for Hindi films and in regional language films. However, she appeared to have quit her career until she was heard again lately in the song for Beti Bachao Movement composed by Hemant Mehta.

Born in Hyderabad on August 16 1954, her father Pandit Jaychand Bhatt, a businessman had shifted to Calcutta. Passionate about music, he eventually became a classical music teacher. As a child Hemlata would diligently listen to the radio and to any form of music around her, besides secretly taking lessons, which her father would impart to children being trained by him in classical music. One of the students went on to become the noted composer Ravindra Jain. The snag was that she was raised in an orthodox environment where girls had to carry out household chores and were kept away from education and art forms. Even though she was keen to learn music she lacked the courage to tell her father that out of fear and respect. 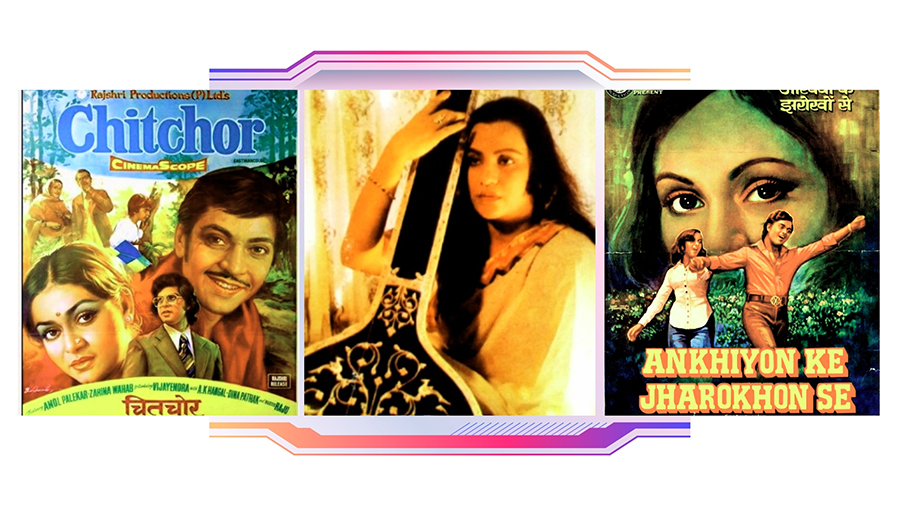 In the early 1960s, there was an announcement for a mega-concert in Calcutta organized by HMV, featuring top singers Kishore Kumar, Mohammed Rafi, Lata Mangeshkar, Hemant Kumar and Usha Mangeshkar, who were coming together on the same platform for the very first time. Coincidentally, one of her fathers’ students was in the organization committee and he also knew her passion for singing. He suddenly announced her name during the interval as Baby Lata and invited her to perform. Hemlata grabbed the opportunity to sing the Lata Mangeshkar track Jaago Mohan Pyaare from Jagte Raho (1956). Instantaneously, there was a mass hysteria among the audience that cheered  and asked her to sing some more numbers. Her father was taken aback but beamed with happiness when he discovered that Hemlata was tremendously talented.  He began to coach her with the proviso that she would never sing for films.

Next, around 1966 she first visited Bombay for a vacation with her parents and three brothers. Her father was keen to visit his sister residing in Maximum City. He had also planned to meet his friends Pandit Jasraj, Ustad Allahrakha Khan, Ustaad Aamir Khan and Pandit Bhimsen Joshi. Plus he wanted to find a suitable groom to get her married before the bug of singing for films bit her.

As luck would have it, she met the stalwart composer Naushad who wanted her to sing for one of his upcoming films. However, that meant signing a contract stipulating that she wouldn’t sing for any other music director for the next five years, a condition which she accepted reluctantly. Soon the media were on the scent of the singer being introduced by Naushad for K.Asif’s next film after Mughal-e-Azam (1960). Immediately, she was flooded with offers from other music composers but had to reject them because of the binding contract. Feeling caged, she boldly broke away for her commitment of exclusivity with Naushad. 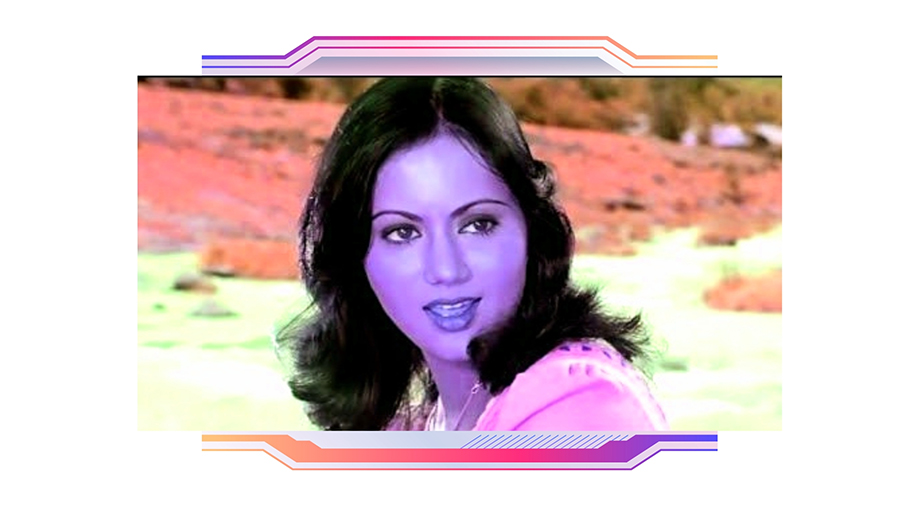 At the age of nineteen in 1973, she got married to Yogesh Bali, the son of Hardarshan Kaur who was the sister of actress Geeta Bali. The groom’s family was also distantly related to the Pandit brothers, Jatin and Lalit and their sisters Sulakshana, Sandhya and Vijayeta. The family she married into was also close to Pandit Jasraj. A son, named Aditya, was born to Hemlata. While carrying out her household responsibilities, she continued with her singing career.

For Ravindra Jain she sang some successful non-film albums. When he was offered films, she sang Chal Chal Chal for him in Fakira (1976), the title song which proved to be a chartbuster. Next, she bagged the prestigious Best Female Singer Filmfare Award for Tu Jo Mere Sur Mein composed by Jain for Rajshri Banners Chitchor (1976).

Her big tickets to the Hall of Fame, came with Rajshri’s big hits Dulhan Wahi Jo Piya Man Bhaaye (1977) followed by Ankhiyon Ke Jharokhon Se (1978), in which she was the solo singer for Ranjeeta. But there was a hairpin bend ahead. The record albums of Ankhiyon ke Jharokon Se suddenly disappeared from the stores. Thousands of the records were destroyed mysteriously. Finally, a fresh lot of records arrived in the markets at the insistence of public demand. 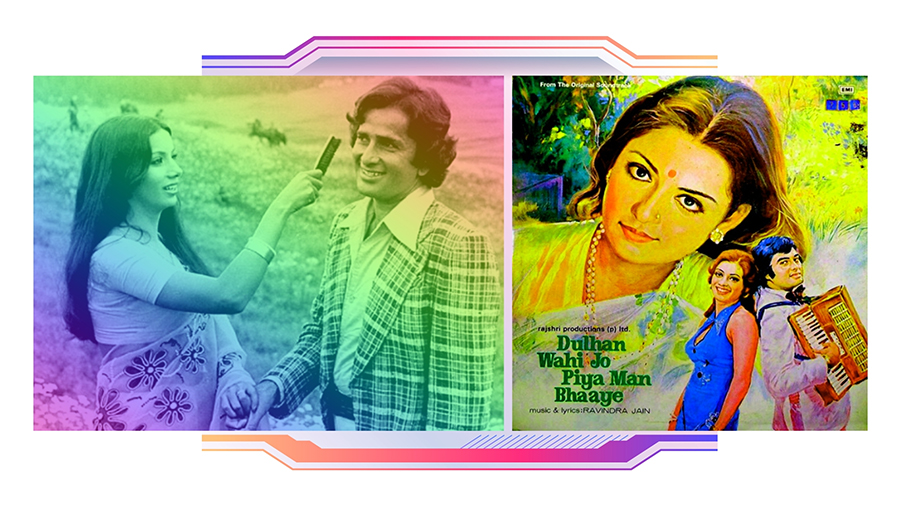 Hemlata’s ascent was resumed thanks to Muqaddar Ka Sikandar (1978) with Wafa Jo Na Ki Toh pictured on Rekha. Her next winning card was the film Saajan Bina Suhagan (1978). Her voice caught attention with the release of Gopal Krishna, Bhayaanak and Raadha Aur Seeta in 1979. Next year, she was heard in Dada, Sunayana, Aap Toh Aise Na The, Sau Din Saas Ke, Jwalamukhi, Oh Bewafa, Kali Ghata and Bombay 405 Miles, soon to be followed by Sannata, Kaatilon Ke Kaatil, Itni Si Baat, Raaz and Haqdaar in 1981.

It was the year 1982, which was boom time for the songstress with the huge craze for the songs of Nadiya Ke Paar. And a major controversy erupted when she lent her voice for the somewhat risqué track Saat Saheliyan Khadi Khadi for Vidhaata. Undaunted, her career peaked on in 1984 with the songs from Abodh, Purana Mandir, Sasural and Dhokebaaz.

Inexplicably, though her popularity began to dwindle in the late ‘80s with her voice being heard in small-budget and regional films. She lost major opportunities. In the late 1970s, Raj Kapoor announced that Hemlata would be the main singer for his next opus Henna. Unfortunately, he passed away before there could be any song recordings. Regretfully, she also missed out on working with R.D. Burman who wanted to use her voice for 1942 - A Love Story. Film lore has it that Pancham was trying to contact her but false rumors about her ill-health and her so-called resolve to quit singing, compelled him to move on to other singers. Gradually, she cut down on her singing assignments. The times and voices, they were fast changing. Anuradha Paudwal, Alka Yagnik, Kavita Krishnamoorthy and Sapna Mukherjee were the new flavors of the season.

In 2002, she accepted an offer to teach music in the gurudwaras of the U.S. After some years, she returned to settle in Mumbai with her family, alas surrendering herself mostly to the sound of silence.