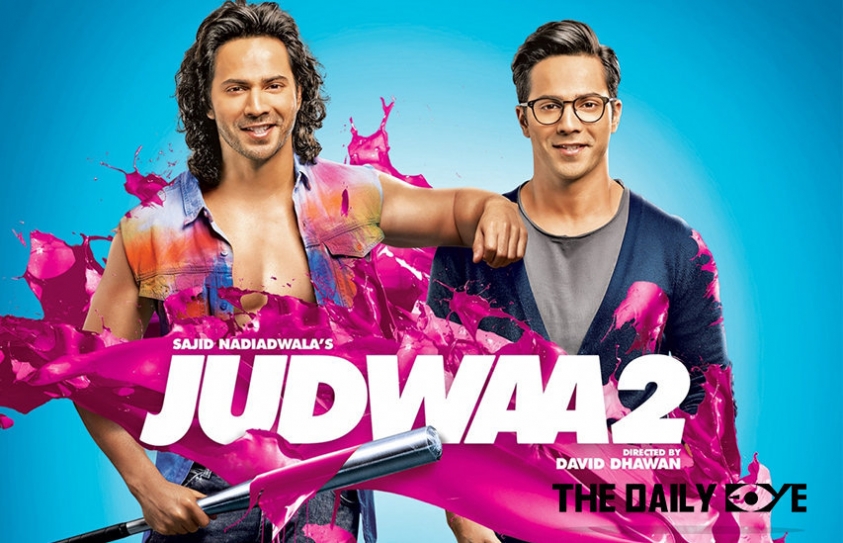 You know when you are about to watch a David Dhawan movie you can never go with your criticizing lens on. You cannot come out of the movie and then go on for hours about how illogical the movie was. The twin birth story plots are the most predicted ones, yet, we willingly go to get some good laughs. Varun Dhawan acutely tries to recreate the magic but he is unable to match the Judwaa of the 90s.

Prem & Raja (played by Varun Dhawan) are twins separated at birth, courtesy Charles, a smuggler and an old adversary of their father Mr. Malhotra (Sachin Khedekar) who eventually leads to a split-up between the brothers. Prem, the weakling grows up in London with the family and lives a luxurious life. Raja is boisterous, grows up in the rough streets of Mumbai, lives in Versova, sings and dances to larger than life Ganpati aartis and bashes the memory off of Alex (Vivaan Bhatena), the goon with just a coconut.

Raja flies to London, trying to escape the henchmen of Alex (Vivaan Bhatena), who he has seriously injured in a fight. The twins end up in the same city, and then began the entire drama of mistaken identity, also involving their sweethearts, Samara (Taapsee Pannu) and Alishka (Jacqueline Fernandez). But surprisingly they both seem to share the bodily reflexes but when in the same country, crazy isn’t it?

Talking about performances Varun Dhawan, does not disappoint. His energy and comic timing is almost half perfect, but it is the same outmoded story that takes it down. Having Rajpal Yadav after a long time on screen was fun. Jacqueline Fernandez plays her usual bubbly girl, nothing that surprises us. Taapsee Pannu glitz it up for Judwaa 2 and is pleasant to watch after her stellar performance in Pink!

The one-liners are not funny, not that it cracks you up! Still wondering having Pavan Raj Malhotra who’s given amazing performances was doing in the film. There’s a lot that one gets out of him. I mean his performance in Rustom, Children of War and Bhaag Milkha Bhaag, what was he doing in Judwaa 2?

Judwaa 2 is mediocre and is a movie you can go watch with family on holidays! There isn’t anything worthy that you’d want to just leave everything aside and watch this film.