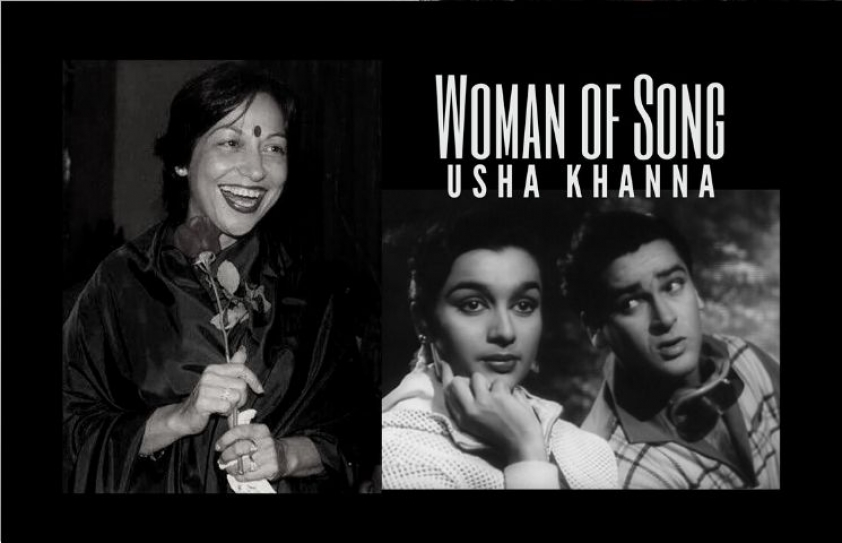 Dhruv Somani makes a case to revisit Usha Khanna, one of Bollywood’s few and certainly the most prolific and popular women composers.

Women have been increasingly making their mark in the rigidly male-dominated hierarchy of the Mumbai Film Industry – particularly as cinematographer, editors, producers and sound designers.

In the music sector though, women can be counted on the fingers of the palm of one hand. Among them are Sneha Khanwalkar, Parampara Thakur, Alaknanda Dasgupta and Rachita Arora. An auspicious trend that. Yet none of them has impacted audiences in the way that the now 78-year-old Usha Khanna has, the woman composer who made her debut with the breezy black-and-white musical Dil Deke Dekho in 1959; produced by Sashadhar Mukherjee and directed by Nasir Hussain.

Although Hussain had just delivered a mega-musical hit Tumsa Nahin Dekha, he chose to work with Usha Khanna who was 17 years old then. Some of Khanna’s early chartbusters were ‘inspired’ by western pop songs, e.g. the title song of her debut film had strains of Sugar in the Morning, Sugar in the Evening but then, it was in the times of ‘adapting’ western material to suit Indian audience palates that she entered the scene. Both the composer herself and the leading lady of the film, debutante Asha Parekh in her first adult role, from there integrated with big-budget Mumbai mainstream cinema.

To say that Usha Khanna has not received her due over time would amount to stating the obvious. Initially, her photographs would appear in the Screen trade weekly, looking shy and posing with a harmonium. Not the kind to self-promote herself, she would candidly admit that she actually aspired to be a playback singer. On being asked by a studio boss if she could outclass the voices of Lata Mangeshkar and Asha Bhosle, she had answered, “No.” 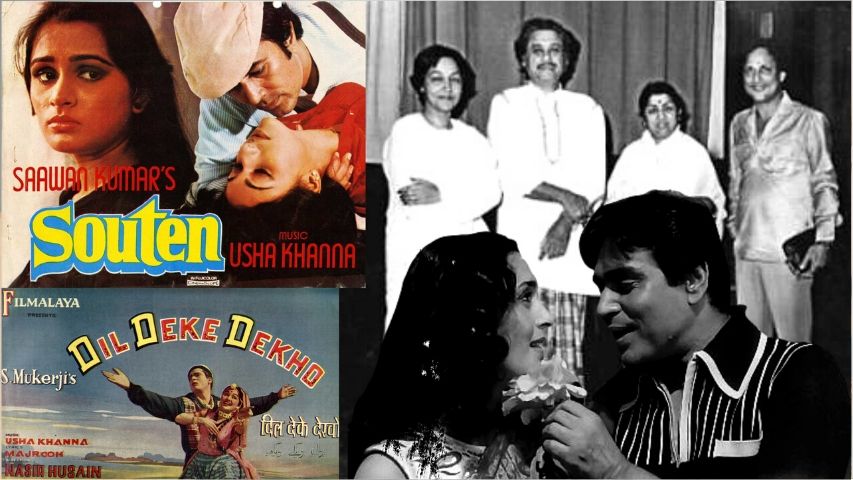 On hearing a couple of songs composed by her at the behest of lyricist Indivar, producer Sashadhar Mukherjee had a rethink and signed her as music director of his film. It was a matter of luck that she didn’t have to return to her hometown in Gwalior and stayed back in Bombay to immerse herself in composing music for mega entertainers of the 1960s. Films were just entering the Eastman Color phase at the time and stories were mostly escapist with happy endings; to sync with optimism in the country during post Nehruvian era.

Usha Khanna was meant to follow the path set by her father Manohar Khanna, a singer and lyricist. Lyrics and playback singing were not to be her but she became a regular at music recording studios. Quite clearly, she went on to become the most successful and prolific woman music director in the history of Indian cinema. Prior to her coming to the scene only Jaddan Bai, Nargis Dutt’s mother, and Saraswati Devi were the two women who had composed film music and their innings were by no stretch of the imagination as prolific and long lasting as Usha Khanna’s who reigned for four decades thereafter. Besides Hindi films, she composed music for many TV serials as well.

At the outset of her career her compositions were greatly influenced by O.P. Nayyar’s music. It is believed that during the making of Dil Deke Dekho, director Nasir Hussain had been a tough taskmaster and guided her to grasp populist styles; melodies with a hook, which could enhance the overall appeal of a film. And she then created songs that instantaneously figured on top of the charts with Binaca Geetmala on Radio Ceylon, compered by the legendary Ameen Sayani.

In a completely male dominated industry in those times, film producers were skeptical, describing Usha Khanna’s fame as a fluke. To add insult to injury, it was even widely spread that O.P. Nayyar had ghost-composed the songs. A gallant Nayyar pooh-poohed rumors and spoke of Khanna as natural talent, ensuring there is no gender bias eluded.

Yesteryear’s music historians also believed that Usha Khanna had to fight against innumerable odds. Music sessions at the time, baithaks (sittings) at producers’ homes or at hotel suites, would happen over dinner and drinks, which would go on till the wee hours. Going against what was the norm, Khanna would give consent to sessions during the day and leave before the sun would set and along with her assistants.

Not surprisingly therefore she had to bide her time, as many as five years, before she could tote her next hit Shabnam (1964). Also, since she wasn’t the go-to-composer by the A-List production banners and directors, she began accepting whatever assignments came her way, which were mostly B and C Grade films. These productions were mostly those, which had been turned down by leading music composers. Besides composing music, Usha Khanna would lend her voice to songs and help save cost of production.  Her persistence paid off because some of the medium-rung productions, which she scored music for had a wow effect on audiences, namely, Khoj (1971), Lal Bangla (1966), Ek Paheli (1971).

The then upcoming producer, lyricist and director Saawan Kumar Tak approached her for Hawas (1974). An erotic-drama, its track Teri Galiyon Mein Na Rakhenge Kadam became a massive hit. Khanna’s association with Tak thereafter led to a brief marriage with him and ended in a divorce.

Could Usha Khanna have gone beyond the formulaic dictates of Bollywood music? When given the opportunity, she composed Madhuban Khushboo Deta Hai (Saajan Bina Suhaagan), which was certainly a departure from what was otherwise expected from her. In an interview she had asserted, “My brief was to make music for masses. I composed songs with the thought in mind that even a rickshaw puller should be able to hum them effortlessly. If there has been a style that I’ve ever adopted, then it’s been to keep it simple and accessible but never lapse to vulgarity.”

Usha Khanna batted a score of over 250 films, some in Tamil, Telugu, Malayali, Bhojpuri and Gujarati as well. A film’s budget was never a deterrent to her. The quality and catchiness of her beats contributed to the appeal of the shoestring-budget films like Aap To Aise Na The (1980), Kharidar (1988), Hotel (1981), Saajan Ki Saheli (1980), Bin Phere Hum Tere (1979); films that would have otherwise sunk without a trace.

Last year in an interview with The Hindu, she said, “There have been plenty of changes in film music in accordance with fads and the tastes of listeners. Despite that I think I can still fit in. Music may change but the composer doesn’t. I would like to believe that I was always young at heart and still am.”

It would be a no-brainer then, to suggest that Usha Khanna deserves to be revisited by vintage film music lovers and dare I say also discovered by Millennial’s who are far too hooked to mindless re-mixes today.