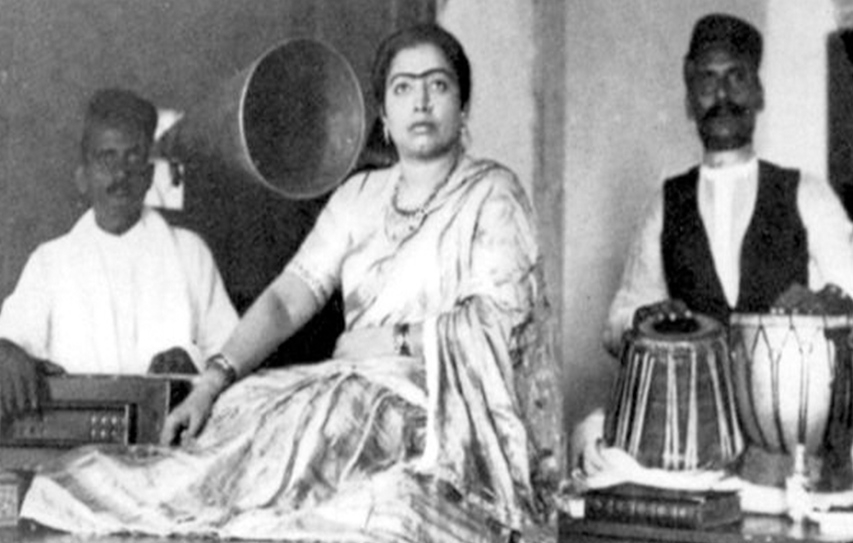 Her Name Was Gauhar

There is little documentation about India’s great performing artistes and even less about the women.

The tawaifs, despite their talent and refinement had the added disadvantage of being considered socially inferior. Fortunately, a recent biography, My Name Is Gauhar Jaan, by Vikram Sampath, traces the life and times of the singer.

The book provided the inspiration for Mahesh Dattani’s script, the story of the singing star who was the first to lend her voice for records in the early days of the technology, when most singers felt the gramophone machine would snatch their souls.

The play, Gauhar, directed by Lillete Dubey has the redoubtable Zila Khan as Gauhar’s mother Malka, as well as the older Gauhar—and she is a marvelous singer. RajeshwariSachdev, resplendent in beautiful saris and jewellery, makes for a glamorous GauharJaan, but lacks the requisite lung power in her singing.

The story of a talented tawaif Malka and her daughter follows the trajectory of many women of that class, in that age—their singing and dancing skill gave them some measure of financial independence, but also left them vulnerable to exploitation by the men in their lives—fathers as well as husbands, and in the case of Gauhar Jaan, even her mother’s supposedly loyal servant, who claimed that he was Malka’s son and she was adopted.

Gauhar was raped at thirteen, admired by wealthy men, who eventually dumped her. In a shocking scene, Gauhar’s father, who had abandoned her when she was a child, demanded money to testify on her behalf in the court case against the perfidious servant.

Still, the journey of mother and daughter is extraordinary. GauharJaan was born in Angelina Yeoward to an Armenian-Jewish engineer William Robert Yeoward and Victoria Hemmings, in 1872. Victoria’s fondness for music and dance and her friendship with a Muslim nobleman, Khursheed, led to divorce in 1879.

She moved to Banaras, converted to Islam, changed her name to Malka and her daughter’s to Gauhar. She earned fame and wealth as a courtesan and poet. She moved again, this time to Calcutta, found favour in the court of Nawab Wajid Ali Shah, and in a few years purchased a mansion and called it GauharManzil. From all accounts Malka was a courageous and smart woman, to have achieved so much, at a time when life could not have been easy for a woman alone, even if she was a famous courtesan.

She got Gauhar training in music and dance with the best ustads and pushed her to perform at the royal court of Darbhanga, where she was appointed court musician at just fourteen years of age. Her fame grew and she travelled as far as Madras to perform, where she impressed the audience by singing in Tamil. In 1911, she was famously invited to perform at the coronation of King George V, where she sang Ye Hai Tajposhi Ka Jalsa, Mubarak Ho Mubarak Ho, with another singer, Jankibai.

There was a time when she spent a then princely sum of Rs.20,000 to celebrate the event of her cat delivering a litter of kittens. Renowned for her beauty, grace and style as much as for her talent, she was highly paid for her performances and all her diva demands were met by admirers.

But her fortune was embezzled by her husband, Abbas, and she spent her last days in Mysore, invited by Krishna Raja Waiyar IV. She died poor and forgotten in 1930. This, after she had she recorded more than 600 records in more than ten languages, ending each recording with a perky “My name is GauharJaan.” After India’s first gramophone recording bore her voice, she was paid the huge sum of Rs 3000, though she was more tempted by the idea of her songs reaching every corner of the country. When her stardom declined, she noted with sadness that her compositions were being sung by others, without any acknowledgement. She was never given her due in Indian music history.

The structure of the play needs a bit of touching up and GauharJaan’s achievements highlighted a bit more, so that the portrait of the woman emerges with more clarity. (Purva Naresh’s plays, Bai Se Bioscope Tak, Aaj Rang Hai and Umrao capture the tawaif’s life with remarkable emotional nuance).

Incidentally, there is another Gauhar/ Gohar whose story deserves to be told– GoharKayoumMamajiwala, a singer- actress, who co-founded the legendary Ranjit Studio with Chandulal Shah and produced a number of films.