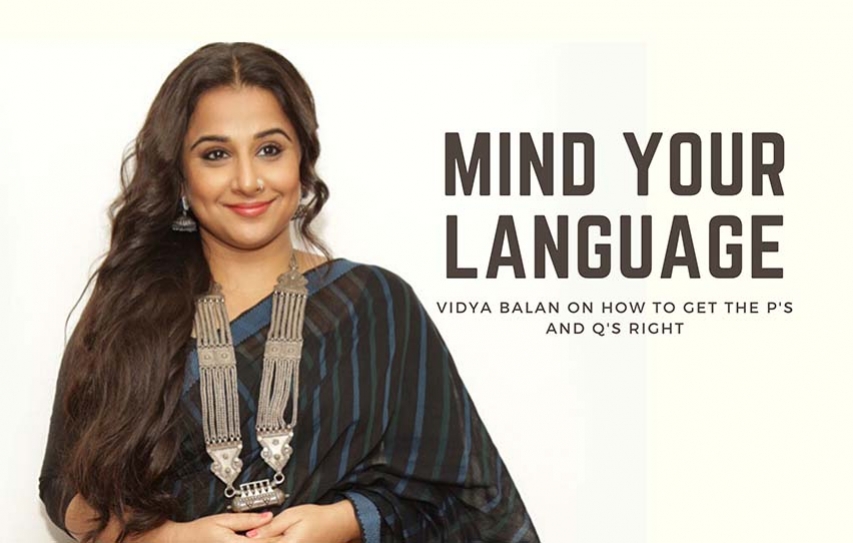 Khalid Mohamed frazzled by today’s Bollywood language, talks to Vidya Balan on how she gets her diction and dialect dot-on.

Right, so we in the audience don’t need to be grammar Nazis. Today’s generation speaks in a polyglot Hindi-English-WhatsApp lingo, and so be it.

Forget the vintage adabi dialogue of yore. Although our films can at least try to get their tenses, nouns, singular and plural verbs right. For instance the plural ‘hain’ is most often reduced to a ‘hai’. And that ‘chaahiye’ has been abbreviated, inadvertently, into ‘chahiye’.

Lately, even Sushmita Sen whose Hindi dialogue is self-taught and near-perfect, went into confusion about the scarce few lines uttered in Hindi by her in the Hotstar series Aarya. Wasn’t director Ram Madhvani listening?

Okay,  granted the nawabi-type of 1950s dialogue has been long dead, buried and gone. It had to be. Yet the new-movie dialogue is a lesson in how to murder the Hindi language spoken today.

Manmohan Desai had coined his own vindaloo of street argot, best exemplified by Amar Akbar Antony, always used in sync with the hyper-fantasy quality of his zany entertainers.

In the course of over the last two decades, cuss words of the ‘mc’, ‘bc’ sort have become acceptable, especially in plots located in the underworld, be it in feature films or web series. Example: the gaali galoz of the trend-setting Satya is tame beer compared to the fusillade of ‘f’ words in the series Ek Thi Begum. Sab chalta hai  *!&@!!, is the way to be.

Not that I’m a prude. But when the cuss words are merely used for sensationalistic effect, sorry wtfooo nahin chalega.

Lyrics have, of course, gone from the poetic to the terribly banal. Javed Akhtar and Gulzar are about the only ones who haven’t gone over the top.

Errrrr, still if you ask Gulzar about the overtly titillating Bidi Jalaiyle in Omkara, his face will cloud and he’ll retort. “That was the demand of the script.” Right.

About the only actors who perhaps think in Hindi as given to them in the script and have been masters of diction are Amitabh Bachchan (whatever happened to the required Lucknawi accent required for Gulaba Sitabo though?), Shabana Azmi, Aamir Khan, Ajay Devgn, Naseeruddin Shah, Manoj Bajpayee, Adil Hussain, Tabu and the late Irrfan Khan, Rishi Kapoor and Om Puri.

And there is Vidya Balan, who infallibly strives to get her accent and dialogue pitch right, be it of a Hyderabadi, Delhi or Mumbai denizen, and more. Study does go into her spoken lines from the sound of things. Without any hyperbole, then, here’s one actor of her generation who cares about the niceties of screen language.

Which is why I had sought her out to quiz her on the topic of what’s-in-a-word.

How did you cultivate the  Seductive Hellooo Voice of  the Night Radio Jockey in Tumhari Sullu?

It wasn’t difficult because (director) Suresh Triveni didn’t want me to change my voice. There was a certain way he spoke the very first time he narrated the script to me… in a voice adopted by night radio jockeys that’s slightly intimate, slightly husky, almost as if they’re whispering into your ears. That’s the only thing I followed.

My voice didn’t really need any training, there was a style which I had to adopt and I did. I didn’t have to listen to too many RJs because Suresh Triveni had done all that research already. 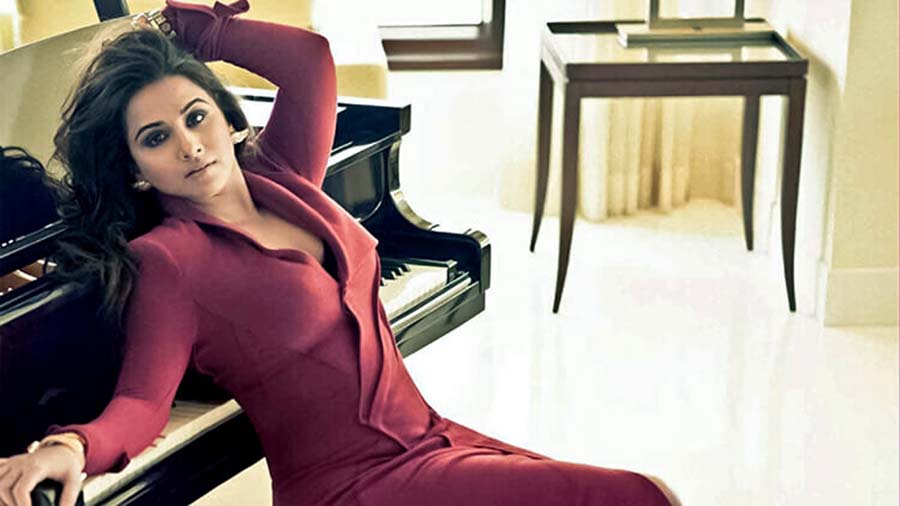 What’s your take on diction and dialects?

I have always been attracted to linguists. Please don’t let that entice any one-track-minds out there please.

I mean there is something special about any man – or woman – who has a special regard for language. So I was always envious of my elder sister Priya, who knows a smattering of practically every language. She can string words together to communicate effectively.

We are Tamilians from Pallakad in Kerala. With time, like my sister I have picked up nuances of Rajasthan. Ever since we were kids living in the Chembur neighbourhood of Mumbai, we have been conversant with Gujarati and Marathi.

English was the basic medium of education. Hindi as well as Punjabi we picked up from our Chembur neighbours, the Aggarwals.

I love Bengali too, I’m fluent in it. I was introduced to it by the cinema of Satyajit Ray. I have seen all his films except for Paras Pathar.

I did study French in school. Perhaps in schools, they should teach spoken French instead of the grammar… because you can get lost in the labyrinths of the past, present and future.

Where does your Urdu lehza come from when it’s essential?

Aah, Urdu has that quality of romanticism. It is elegant, royal, even gaalis in Urdu sound charming.

My first image of Urdu as a language is associated with the TV series Mirza Ghalib, which I would watch diligently when I was a kid. Naseeruddin Shah’s command over the language is impeccable. As an actor, it’s a must to get one’s pronunciation right, with the correct emphasis on certain syllables.

The nuances of Hindi too, require discipline. My head would have been on the chopping block if I had faltered with any of the lines in The Dirty Picture. Of course, I had to keep in mind that it was my character, Silk (a southern actor known for her sultry personality) saying the lines and not me. In Ishqiya and Bobby Jasoos, I tried to convey the dialects of east U.P. and Hyderabad respectively. 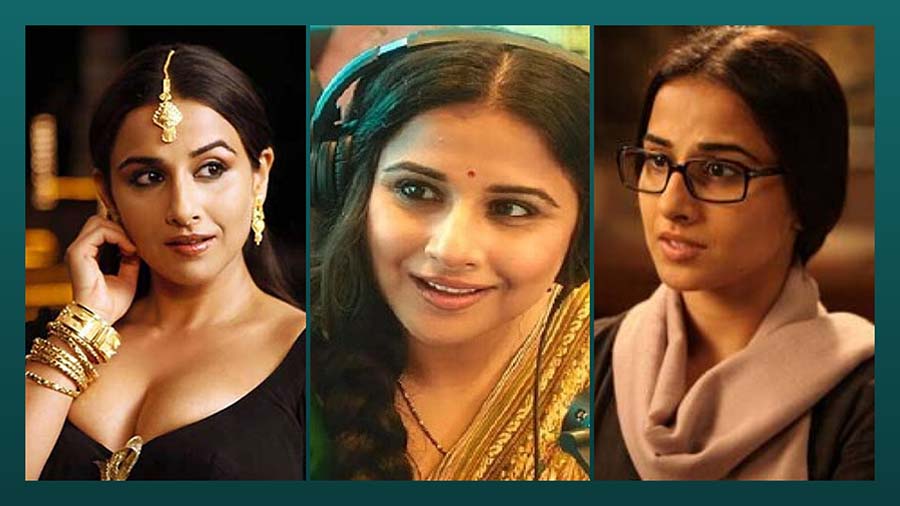 Who’s the Perfect One in dialects, according to you?

See Meryl Streep is amazing, whether she’s playing American, Polish or British. As Margaret Thatcher in Iron Lady, she was word perfect.

Can you cite any dialogue of the unforgettable kind?

Movie dialoguebaazi? Now that may not be the way we speak in real life but a balanced element is a must for cinema. Take the wonderful dialogue about life dangling like ‘kathputlis’ enacted by Rajesh Khanna in Anand. In real life, that wouldn’t sound authentic. In cinema it has become memorable.

Remember your rumoured crush on Gulzar?

There you go, Mr One-track Mind. I have marvelled over the lyrics and poems of Gulzar saab in their recorded forms and in Roman scripts. I hope to read more also of Firaq and Mir Taqi Mir by and by. I’ve been an aspiring Urdu speaker.

Once at a function, I couldn’t even say the word ‘idiot’ in front of Gulzar saab. He would have thought that I’m very ill-mannered. I am a No. 1 fan of his ghazals. The first-time I met him, I was tongue-tied.  Nervously, I rattled off something in Bengali to the photographers who were at the spot.

Oh oh, and what to do about foul language?

By my upbringing and nature, I’m conservative when it comes to foul words in any language. I guess it’s okay to use cuss words once in a while among friends… but never with one’s peers and colleagues. All that mc-bc-tc-vc is disrespectful.

Once Dada (director Pradeep Sarkar), quite uncharacteristically, screamed at technicians on the sets of Parineeta. I froze with fright. Today, I’d be okay with that.