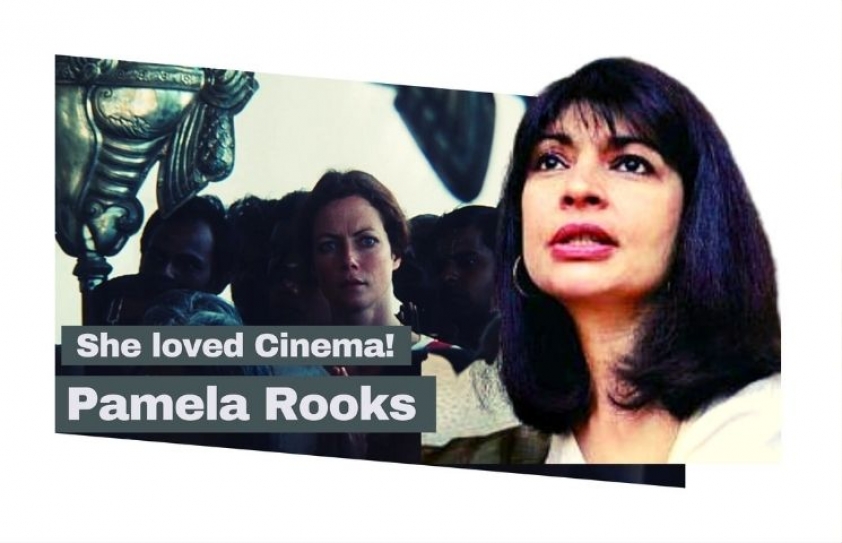 Humra Quraishi revisits the life and times of Pamela Rooks. And, her films, Miss Beatty’s Children and Train to Pakistan.

I had  met  Pamela  Rooks several times at Khushwant Singh’s home, when she was making a film based on his novel Train to Pakistan. Of course, before I’d met her formally, I’d heard of her - she was a theatre artist  and journalist turned documentary filmmaker. And, it’s said that it was during one of her journalistic assignments that had led her to interview Conrad  Rooks; she’d fallen in love with him. He was the director of the film Siddhartha. After an intense relationship between Pamela Juneja (her maiden name) and Rooks, the two got married. The marriage didn’t last but before the two parted ways, they had a son; who went on to live with his father.

Pamela stayed back in Defence Colony, New Delhi – in her parents home – and involved herself with making films. Miss Beatty’s Children was her first film. The second film based on Khushwant Singh’s novel was Train to Pakistan. By the time Pamela had found a companion in Richard Holkar; son of the Maharaja of Indore, Shivaji Rao Holkar.

I always saw Pamela and Richard together. They had a certain chemistry, which is rare. He was the Maharaja but she was the one who had the arrogance. Richard seemed to be casual and supportive.

Pamela was a confident woman, always in western attire. At the time I used to meet her, she was working to bring attention towards Richard’s ancestral home Ahilya Fort in Maheshwar, which is famous for its traditional weaves, but I never saw her wear a Maheshwari Sari.

In 2005, she met with a freak car accident in New Delhi’s Vasant Kunj, while the couple was returning to their home from the airport. She slipped into a coma and remained in the condition for the next four years. Finally she passed away in October 2010, when she was only fifty two years old. 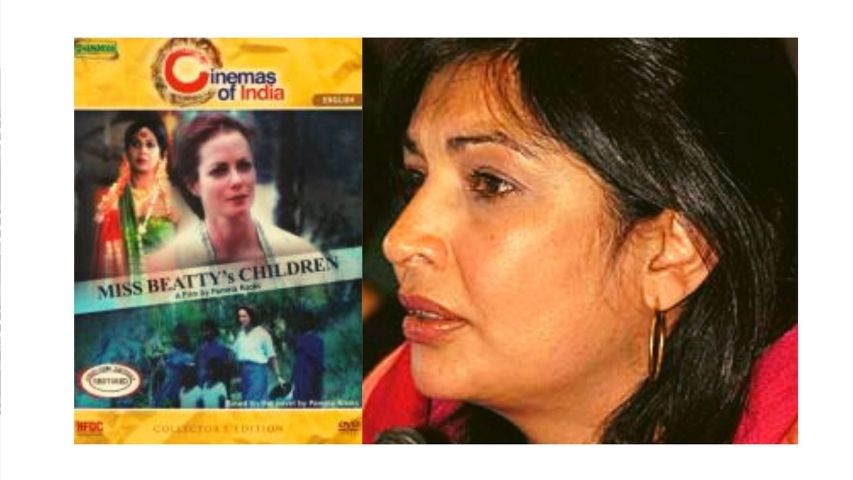 Pamela Rooks died young but not unsung. She’d made her mark as a filmmaker and was well known. With her finely featured looks, she was surely attractive and talented as well. If she had shifted base to Mumbai, she would have made many more films - but then between her career as a documentary filmmaker, writing, travelling and taking care of Richard’s ancestry and promoting it, there was no time I suppose for her to do more.

I interviewed Pamela soon after her maiden film Miss Beatty’s Children, was screened in New Delhi - in the Film Festival of India’s Panorama  section. This film  by her was based  on the book written by her with the  same name.

Here are some excerpts  from the interview:

Before you started working as a journalist, you were doing the Language course at JNU and also into theatre. Now you’re making films. Is the change from theatre to journalism and now to films because of Conrad coming into your life?

No, not really. I, for one, always loved cinema. But yes, my marriage to Conrad in 1978 exposed me to the world of cinema and I had access to all the famous and well known film personalities on a one-on-one basis.

Why did the two of you drift apart?

That’s my personal life. I wouldn’t like to talk about it, nor discuss it.

There have been so many shifts, or call them changes, in your professional life – theatre to journalism to scriptwriting to making documentaries. Now you’re making films and also writing books?

Not that I quit journalism but yes, after I married Conrad, other  priorities took over. We did a lot of scriptwriting together and also made documentaries on the girl child, the Chipko Movement, AIDs and also short  films on the then political situation in the states of Punjab and J&K. But all  through this I kept writing this book on which I have based this film. It took me years to complete this book. In fact, this book happened quite by chance. 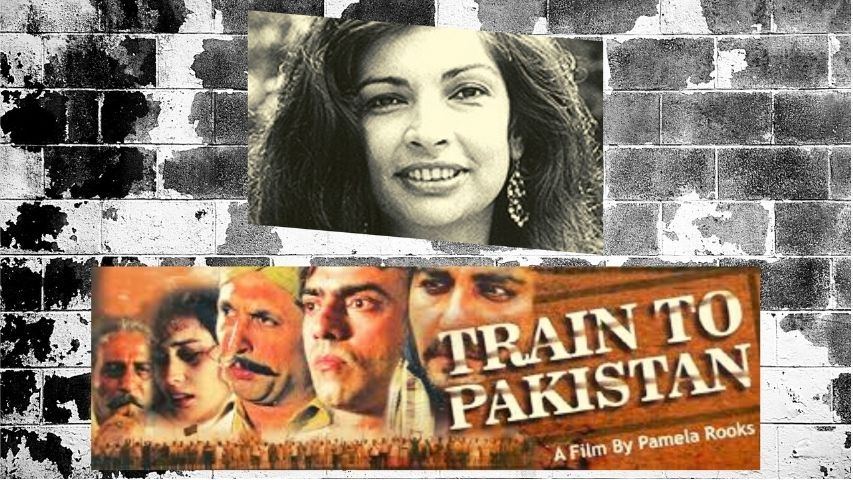 Early in the 1980s, when I was into theatre, and I was working with a  theatre company called The  Group, I had this friend Marcos Mirch. One day he told me how he had been adopted by an English lady, who had  adopted  11 other children as well. It really fascinated me to hear how this Christian   missionary goes about rescuing kids and adopting them. So, revolving  around that basic idea I wrote the book and now this film.

This is your first full-length feature film. Comment on the odds you faced in its making?

After having gone through the  screen play, NFDC decided to bear half the   budget, but then, there were problems about the  other  half. In fact, I took almost 6 months to find the other financer and that too in Italy. Other problems also came up; a few actors had to be brought from abroad to fit with  the  story line and I had to pay them in foreign currency. Some other very  trying and frustrating moments too, because I was a first time Indian film maker with no foreign films to my credit and that worked against me. But  one had to move ahead and after the  finance hurdle was through I started  shooting the film. It was shot in Southern India and we completed the  shooting in a record period of seven weeks. And now, by God’s grace this film is being so widely acclaimed.

Below is some information about the two films, which Pamela Rooks made. You might want to see them again.

The film was set in South India 1936. Jane Beatty, an idealistic English schoolteacher arrives at a mission in Trippuvur to work with Mabel Forster, a strong-willed missionary devoted to saving young girls from being sold into temple prostitution. In 1936 Jane, an English schoolteacher comes to Trippuvur to work with Mabel Forster, who runs a mission school, and works towards young girls from being sold into temple prostitution. She has Kamla Devi, a senior temple woman as her opponent. Once when Mabel has gone away Jane finds herself trapped in a local controversy. She rescues an Anglo-Indian girl and takes her to Ooty, but back in the town she is accused of kidnapping. However she manages to find help with an American doctor, Alan Chandler. Eventually she adopts Amber, and rescues several more children.

The cast included Jenny Seagrove, Faith Brook and Protima Bedi. The critically acclaimed film won the Indira Gandhi Award for the Best Debut Film for the Director and the National Film Award for Best Cinematography.

It is a film adapted from Khushwant Singh’s 1956 classic novel by the same name. The story unfolds during the Partition of India (1947) - the film stars Nirmal Pandey, Rajit Kapur, Mohan Agashe, Smriti Mishra, Mangal Dhillon and Divya Dutta.

The place is Mano Majra, which is a quiet fictional village on the border of India and Pakistan,  close to where the railway line crosses the Sutlej River. The film develops around the love affair of small-time dacoit Juggut Singh (Nirmal Pandey), with a local Muslim girl, Nooran (Smriti Mishra). Mano Majra, incidentally, was the original title of the book upon its release in 1956. The villagers are a mix of Sikhs and Muslims, who live in harmony. The Sikhs own most of the land, and the Muslims work as labourers. During the summer of 1947, when the Partition of India was taking place, the entire country was a hotbed of extremism and intolerance. The Muslims in India moved towards the newly formed Pakistan, and the Hindus and Sikhs in Pakistan migrated to refugee camps in India. One day, a train arrives from Pakistan, which carries bodies of all the travellers who have been butchered while they tried to depart from Pakistan. That is when this quiet village is changed forever.