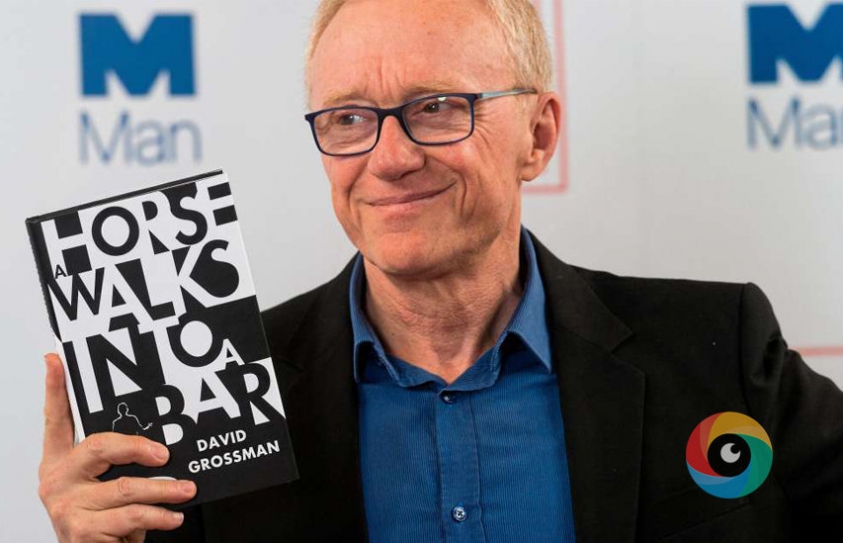 There is a condition called the sad clown syndrome, which states that people who make others laugh, are often unhappy or depressed. That’s probably why a traditional theatre clown’s make up has the lips downturned and tear painted on the face.

David Grossman’s A Horse Walks Into A Bar (translated by Jessica Cohen) has won this year’s Man Booker International Prize. It is disturbingly tragic novel about a comedian, set in the very contemporary world of stand-up, but wrapped up in the history and politics of Israel.

There are a few bad jokes in the book, but it is not remotely funny. The narrator is a retired judge, Avishai Lazar-- carrying his own burden of loneliness and rage--who is contacted out of the blue by Dovaleh Greenstein, who he knew in school.  Because of his own shameful cowardice in the past, Lazar has put Greenstein out of his mind. Still, he is unable to refuse when his old schoolmate invites him to a stand-up show in the small town of Netanya. He just wants his old friend to watch the performance and give him his opinion.

The book then, is set in a basement bar, and runs over the two hours of the excruciating confessional show. What Lazar sees is a painfully thin, oddly dressed (in ripped jeans, red braces and cowboy boots “adorned with silver sheriff stars”) man, who starts by insulting the audience, among them, Azulai, a tiny midget ‘medium’ with a speech impediment. He pretends not to remember her, because she knew him when he was an eccentric kid who used to walk on his hands to get over the violence of his father, and peculiar silence of his mother (obviously traumatized by the Holocaust).

The audience does not know what to expect, Greenstein is intermittently funny and engaging, but also shocks them by hitting himself hard, or starting on his own story, which is not what people have paid to hear—they want jokes and they are getting waves and waves of a man’s angst.

The audience starts to leave, some grumbling loudly, some escaping under cover of darkness; but the ones who remain listen with morbid fascination to incidents from his troubled childhood. Lazar was part of a particularly horrible time in a military training camp, where he stood by and did nothing when Greenstein was cruelly ragged by the others.  Lazar sits squirming in his seat, fearing that Greenstein will give him away any time, but the comedian keeps up a non-verbal communication with the judge without giving any indication of the past friendship.

Greenstein is not a likeable person, his theatrics on stage are aggravating, but they are also the attention-grabbing antics of a man in physical and emotional pain. His marriages fail, his five kids are strangers to him, he finds wells of humour from his own arid life. His inspiration for becoming a comedian is right there in his rambling narration—a kindly joke-spewing truck driver taking the stricken teenager from the camp to a funeral, when nobody has even bothered to tell him which parent has died.

The reader, unable to put the book down, is like the audience in the dingy bar, that stays on even though they are not getting the promised comedy. Because Greenstein, nose bleeding, broken glasses askew, tired and aging, has taught them that humour does not necessarily grow out of happiness.

In present-day India, of course, the comic carries the addition risk of offending somebody or the other, and threatened with jail or legal action. The situation would have been fodder for the stand-up comedian if it wasn’t so scary.

A Horse Walks Into A Bar