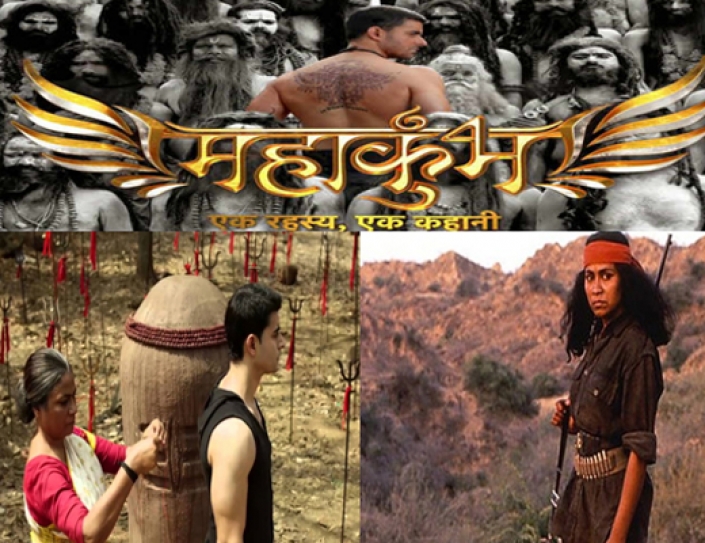 Watching Seema Biswas in Maha Kumbh: Ek Rahasaya, Ek Kahani?...? as Mai Mui, Rudra?s surrogate mother, a thought occurred that it was too trivial a role for an actor who is a power house of performance. ?Early in the series, she?s killed off by religious militants. It still left me quizzed. Then she returns as Bhairavi one of seven Garuds. It is in this avatar she?s particularly impressive and there?s a raison d??tre to her character. After Rudra and Shivanand, she appears to be another pivot of the Garuds.

Her re-appearance sequence has her perched on a tree, looking down at Rudra with mischief in her eyes. She seems like a foot soldier. She is adept with the wand ? swirling it, parrying and thrusting at opponents. ??Her sense of action is on par with her performance. Sure it?s been over two decades since Bandit Queen, but her alacrity for action sequences remains intact. Although as the dacoit she was a rough and hardy fighter. ?Here she is all grace in fierce action, which complements the conservative sari clad Bhairavi. At the same time, there is much more to Bhairavi than meets the eye. Is she playing double cross? With each episode, Bhairavi emerges a power to contend with, a manipulator.

If Seema Biswas stayed away from the small screen all these years, it?s because TV didn?t offer her a role where she could rise up and do justice to. ?Mother or grandmother roles are no challenge. Post Maha Kumbh, Seema Biswas will switch off the small screen, but this role and the serial will remain matchless. Unless, another challenging role comes her way.? She has never allowed herself to be typecast.

Ketki Dave?as Thappadiya Ma is another Garud. Known for her repartee in comic roles and quirky characters, here the actress has shown that she is as adept with action, as she is with eccentric behavior.

But a role and performance that deserves a berth among the best is that of Kruttika Desai Khan as Ekadashi in Uttaran. Kruttika ?plays the avenging widow who seeks revenge on Iccha for killing her husband. The actress ventured where no other Indian actress on the small screen has -- she went bald. She wasn?t willing to compromise with prosthetics. Attribute it to her theatre genes and a commitment to her role. The linguistic finesse and her look complimented Ekadashi?s character, placing it among the finer character roles essayed ??on the small screen.

Meghna Malik ?altered her body shape, she even put on weight, to play? the stocky Ammaji in Na Aana Is Des Laado. A multilayered skirt, heavy wrist kadas, a manly, powerful gait and low pitched? harsh voice. She was the formidable tyrant who enforced female infanticide and struck terror in the villagers. In the process of getting under the character?s skin, she suffered bruises during the horse riding sequences and a ?nagging back ailment. ??Somewhere deep down was hidden? a? charming, elegant ?and feminine person, who briefly emerged as Anjali, Ammaji?s double. The real Meghna Malik.

Surekha Sikri?s high pitched, high handed Kalyani Devi made her the most recognizable Dadisa on Indian television. Balika Vadhu has had many an actor change, but Surekha Sikri has been true to the show since episode one. The small built actor, gave Dadisa a formidable look ? doting on her grandson,? ?terrorizing his child bride and remarkably funny when she goes to school. Dadisa?s foil is Premkishore played by Sudhir Pandey who woos a coy Dadisa with freshly cut roses from his garden! ?Surekha Sikri created the persona through pure performance.

Her entry as Rudra?s lost Dadi in Maha Kumbh: Ek Rahasaya, Ek Kahani?... was but a brief interlude. Her character has been killed. Or is there more to come?? As regards Balika Vadhu, she?s as essential to the show as was Ba in Kyunki Saas Bhi Kabhi Bahu Thi.

Often when one watches a serial or remembers a past one, a character or two? lingers in our memory, long after these shows are done and over with. Have you forgotten Master Haveli Ram from Buniyaad??