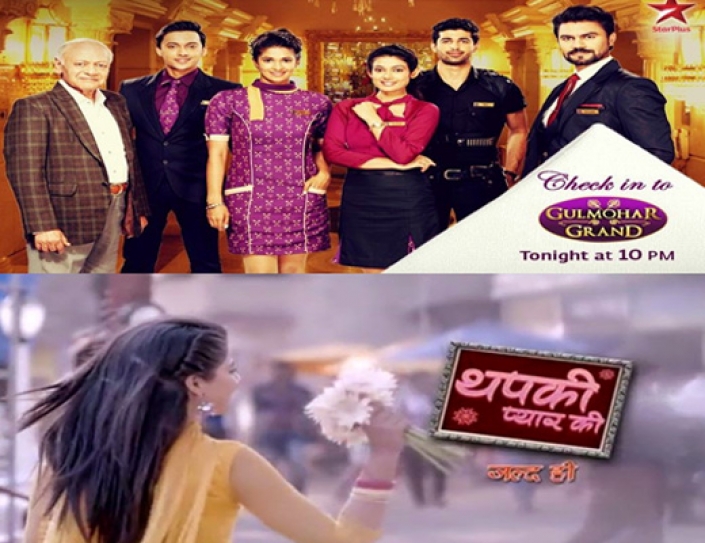 When scriptwriters and producers think out of the box and rope in actors to support their fresh thinking, one can see the emergence of shows which could make viewers sit up and take notice. By the time the month of May ended, two new shows struck a chord with me ? Gulmohur Grand and Thapki Pyar Ki. ?

Kudos to Star Plus?s initiative? ?for continuing its hour long weekly miniseries, and it needs to be encouraged, more so as it is a finite show. They started with Airlines and now have moved to the hospitality industry? ?with Gulmohur Grand. ?Both the aviation and the hospitality industry offer tremendous opportunities to cull out script elements.? Novelist Arthur Hailey picked each of them as settings for his novels which were then turned into films.?

Similarly, each episode of Gulmohur Grand deals with a new narrative from alcohol poisoning to child running to a serial killer on the prowl for prostitutes to strangle with a signature red scarf.?

What is interesting is that the show is being shot in the plush interiors of Imperial Palace, a hotel in Royal Palms, Mumbai. The live environment imparts an authentic feel, which a constructed set wouldn?t. With Gaurav Chopra and Akanksha Singh in lead roles, with an equally competent supporting l cast per episode, each one hour episode is a revelation in terms of the plot. But there is a strain of mystery and that is in Annie (Akanksha) who is continually walking corridors where she shouldn?t be in search of a clue. ?That mystery will unfold in due course, while each week a new incident shakes up the hotel, but is discreetly swept away by Annirudh?s (Gaurav Chopra) suave damage control.? ??

Gulmohur Grand is a welcome change in the midst of the weekend flurry of reality shows and comedy shows.

Thapki Pyar Ki revolves around Vaani who has been rechristened as 'Thapki' by society due to her stammer, which can be broken by a nudging pat (thapki) on her back. Even with her flaw, she aspires to be a TV anchor.? ?Jigyasa Singh, the actor who plays Vani, too stammers in real life!

Playing Vani, this infectious young actress is making her dream a reality, as Jigyasa always dreamed of becoming a part of the television industry. ?Already in the first few episodes, Vani has charmed her way with a subtle touch of understanding. She is being married off to Dibaker who is short.? A match of their respective defects as society would call it. When both parents are shopping for the nuptials, one can see Dibakar?s parents make demands on Vani?s parents. Comply they must.

When Vani and Dibakar visit the temple, he is unable to reach the bell, she quietly lowers it. She abandons her love for high heels, so as not to belittle him, while his friends make fun of her.?

Colors and SOL need to be commended on a choosing a narrative about a physical challenge, which needs to be addressed. Their credo is summed up in Vani?s words when she says: My defect isn?t here or here (as she points to her head and heart); it?s here (pointing to her tongue). That aptly reflects society?s viewpoint of people, who they deem imperfect or abnormal. They mock and demean such people and I would guess Thapki will deal with it all and is going to challenge the social mindset about people with speech impediments and a shortfall in height. ?Thapki Pyar Ki has moved away from the metros and it?s good to see Agra?s by-lanes and markets.

Television is a means to bring about an understanding of human frailties. Some years ago, Zee TV?s Aap Ki Amrita did just that with autistic children and society?s shunning them and mocking them. Thapki Pyar Ki is likely do the same? The 7 pm time slot would serve the purpose of young adults or older children understanding certain handicaps and change their thinking from humiliation to acceptance and support.?