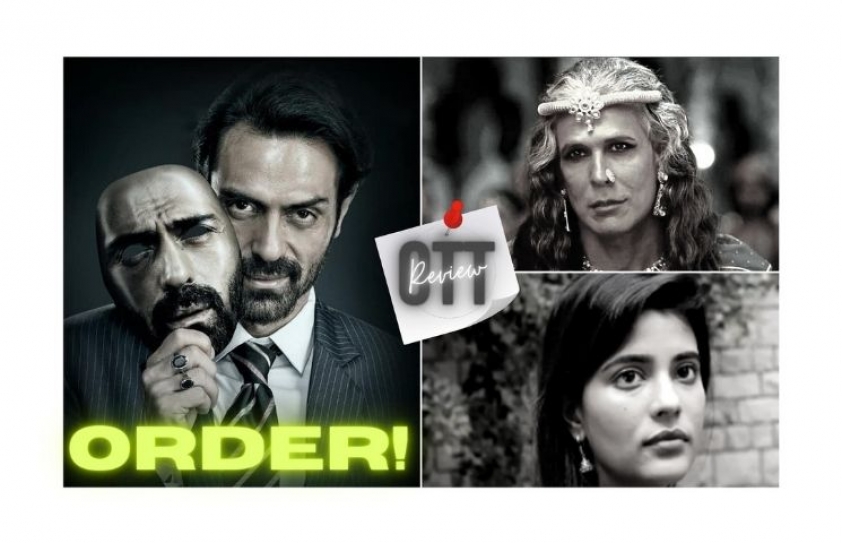 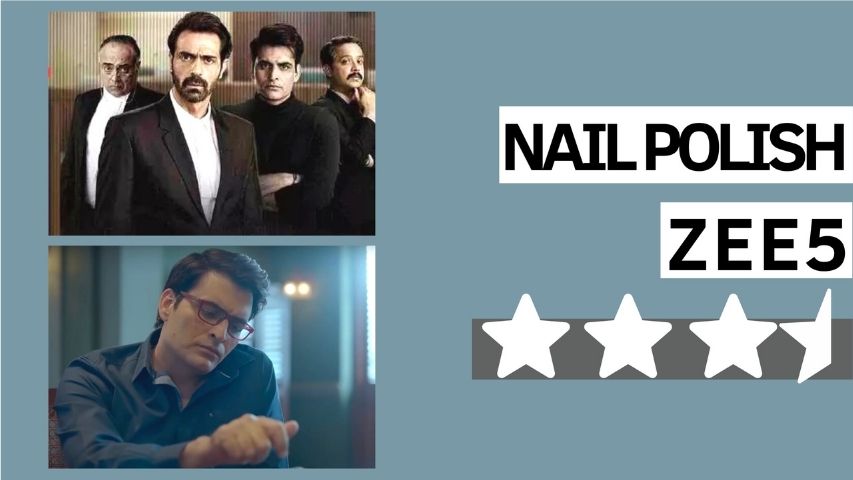 Polish or no polish, this is a nail-biter, which gets tighter-‘n’-tighter with the plot opting for so many twists, that this series could have been more aptly titled Aao Twist Karen.

But seriously, this courtroom in U.P. (supposedly Lucknow) with a view purrs, snarls and mews, compelling you to worry-‘n’-flurry, especially about its four principal characters who may or may not be quite clearly way more than meets the eye. Titled Nail Polish (which alas sounds like a Vikram Bhatt steamy-squirmy sex flick), this compact 120-minuter is anything but that. So praise be the lord.

Right-away though, I must admit, that I have an Achilles heel about judges yelling, “Order! Order”, lawyers exhaling, “No more questions milord” (‘janab’ is the buzzword in this case) and a bunch of assorted spectators sitting as still as statues while monitoring the proceedings. Indulging in time-pass or what?

Be that as it may, adapted from some unspecified true events, the screenplay, written and directed by Bugs Bhargava Krishna, triumphs in maintaining a hawk-like vigil on the goodfella Veer Singh (Manav Kaul), an ex-army officer and an undercover spy-now-turned a school sports coach. Hang on though, out of the blue the ‘nice guy’s’ accused of the  perverted  murders of two children (ouch, were those tummy-turning visuals essential?), which could be linked to a chain of serial killings. Etched as a Good Samaritan of a guy, the spectator is convinced that he’s being framed-‘n’-defamed. Tsk.

Enter, the uber suave defence lawyer Siddharth Jaisingh (Arjun Rampal) who has this habit of hurling darts at a portrait of - shiver your timbers - his dad. Next, within a heartbeat you learn he’s been chosen to plunge into the murky waters of politics, and has even been promised a Rajya Sabha seat. Come on, you don’t have to guess that our champ legal eagle, Sid, can sort out the horrendous mess.

As sharply etched is the public prosecutor lawyer, Amit Kumar (Anand Tiwari), who loves playing Superman-Batman with his kid and hates his dinky car, which needs prayers to get started. As earnest as a Boy Scout, he’s unwaveringly lucid in his courtroom arguments to ensure that justice prevails. Vague chances are that this spunky David might demolish the Rajya Sabha wannabe Goliath. Suspense, of a Hitchcockian kind, mounts.

Over to the distinguished judge (Rajit Kapur), whose brows are knitted like a chunky sweater. Incidentally after hours, he’s coping with a boozaholic wife (Madhoo Shah always garbed as if she was attending a wedding reception) and somehow steels himself to be impartial, like all exemplary judges should. Fingers and toes crossed.

Call it foxy or smart-plotting, the dramaturgy then dares to venture into the psycho-domain. The mind, it is theorised, counts infinitely over matter. Gratifyingly, there isn’t an excessive amount of natter-natter (read dialoguegiri), since the focus is on the implied aberrations of human behaviour. Indeed, it’s this aspect, which makes Nail Polish superior to most of our facile courtroom dramas that start with a bang-bang and end up in a simper whimper.

Inevitably, there are those loopholes aplenty, besides quite a few redundant scenes, like an army officer’s sunny chat-a-tat at the outset, about losing at card games on encountering the suspect at a sports field. Also the ding-dong rants of that wine-glass-toting Mrs Judge, now what in the name of Chardonnay was that?

Moreover, while the shot-takings are neat, the production design is at best functional - perhaps because the project was filmed under the extenuating conditions of the pandemic.

Aah never mind such quibblings, director Bhargava has succeeded in narrating a plausible story against the myriad odds. Above all, here’s a showcase of inspired performances. Manav Kaul, in an author-backed role, has more footage and opportunities to take off on a histrionics exhibition, which he does with thorough conviction. Arjun Rampal discloses maturity and keeps himself at a low, implosive simmer. Come to think of it, his measured body language and voice modulation are among his career-best. Anand Tiwari, theatre and film actor who lately turned director with the first-rate Bandish Bandits, is in terrific form. Underscoring his sense of befuddlement and righteousness alternately, he’s the perfect foil for the more urbane defence lawyer. And Rajit Kapur is correctly restrained.

In fact, spot-on casting in these four key roles turns out to be the right shades of polish throughout. Worth a dekko. 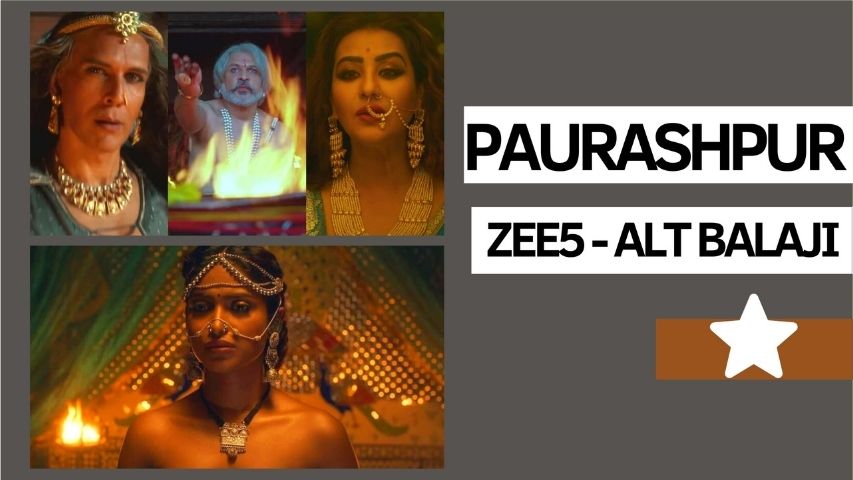 Blow the trumpets. Our beloved stalwart actor, Annu Kapoor, is a bewigged monarch out here who’s frequently dunked in a brass receptacle of steaming hot water flecked by rose petals and surrounded by nubile nymphets no less. Or, he’s getting massaged with  hopefully non-chemical oils in a royal spa. Bah. Big time trouble is that he’s a weirdo who bites, chomps and chews his fresh new brides supplied to him at dusk or dawn. Mammoth yawn.

Then there’s his first queen (Shilpa Shinde), garbed in all the silks still available at Nalli showroom. Zoom barabar zoom. She’s as evil as Cruella De Vil, who probably doesn’t even pay her daily textile bill.

On to the 16th century’s queendom’s trans-gender representative. Named Bore-Is (Milind Soman, if you puh-lease),  the plan is to out-pout Jim Sarbh in Padmavati. In vain. Photographed in enormous close-ups, Bore-is sashays and sways, leaving you in a haze of a daze.

Plus, do count the durbar’s display of women, most of whom have a lock tied to their waists, as if to suggest haste makes waste. Except for one of ‘em, who’s outfitted in a gown of beads to tantalise dear Annu Raja to immediately call for a band-baaja. Not to forget, a princeling who huffs, puffs (a hookah for period authenticity) and is an ever-ready battery to prove he’s more buffed and oh-so-chuffed.

In the name of Sherotica, the Alt-Balaji spectacle, yeah the sets are kinda lavish, is a free-for-all invitation to endure boudoir shenanigans between males-females, males-males and females-females. Luridly lensed, the high-brow (ha!) point is to suggest that patriarchal rule is just not cool. Those subjugated women ko unlock kiya jaaye, pronto.

Ayyya, daiyaa, Paurushpur could well inspire a sequel titled Womaniyapur. Till that transpires, I will have to locate the cellphone number of Annu Kapoor sir, at least, and ask, “Yeh aapne kya, kaise aur kaikoo kiya?” 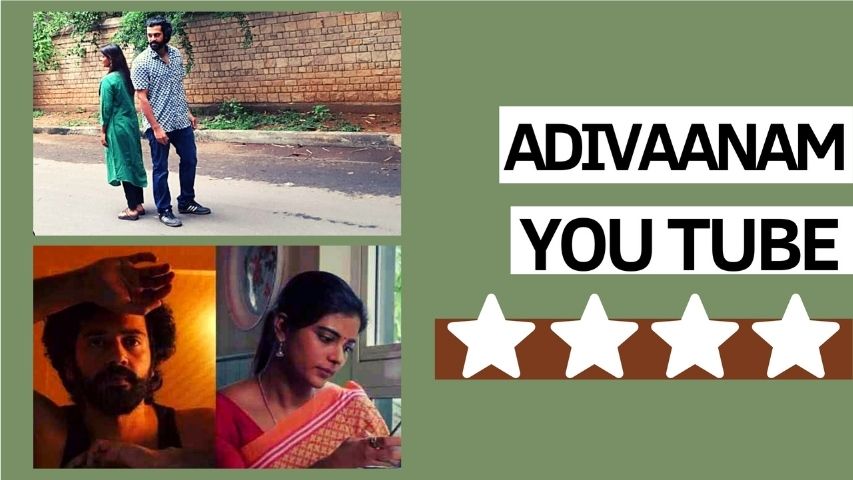 The Chennai-located director, Sharada Ramanathan, who bagged three National Awards for her debut Tamil feature film Sringaram (2007), has now fashioned a five-minute short, Adivaanam (The Horizon). Here’s a heartfelt take on the unspoken effects of the pandemic, causing an aching loneliness, apart from the realisation that those ensconced at homes, cannot even guesstimate the incalculable misery of the working class, be they farmers, construction or sanitary workers.

Intercutting between a young woman (Aishwarya Rajessh - impressive) who’s keeping calm within her neatly-appointed home, a young man  (Ashwin Kakumanu - subtle), who’s restless, checking on his food supplies in the refridgerator and documentary shots of the toilers in the scorching sun, Ramanathan suggests that hope and a new horizon can be visible to those who long for a better world, devoid of self-centredness. Perhaps compassion between fellow beings, love between two strangers and a long, stretching phase of patience, will bring forth a new tomorrow.

The outcome is a lustrous jewel of a film - a must in these trying times. Instead of prose, which may have been too sanctimonious, Ramanathan carpets her statement with a gentle poem by Swati Var. And of course, Adivaanam is supremely enhanced by the caressing visuals by the celebrated DOP Ravi K. Chandran and the fluid editing by the master Sreekar Prasad. Do catch this short film which leaps from the screen to give you a hug.