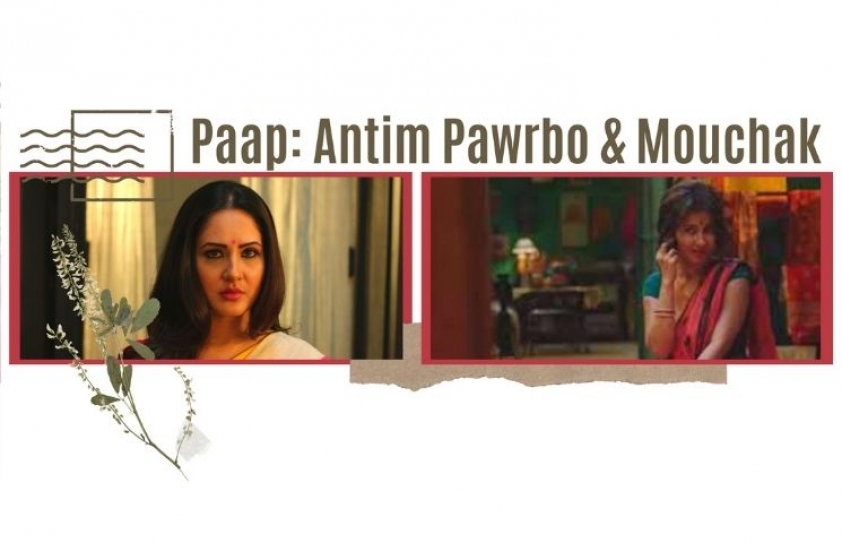 Two new web series from Hoichoi - a murder mystery (Paap: Antim Pawrbo) and an adult comedy/thriller (Mouchak) - suffer from the bane that plagues most of its web series, abysmal writing.

I wonder if it’s because my expectations from a Hoichoi web series were so low after the dismal experience of Damayanti: Season 2 and Mohomaya, that I was pleasantly surprised with Paap: Antim Pawrbo. Not that there are no problems - and major ones at that - with the plotting and the narrative. It beats me why despite access to such contemporary series like Mare of Easttown and True Detective, and a legacy of great works of detective fiction in Bengali itself, writers of web series in Bengal fail to get the demands of the genre. Paap: Antim Pawrbo, however, is rather enjoyable, thanks largely to Rahul Banerjee’s performance.

The set-up is classic murder mystery - a family gets together to celebrate their traditional Durga Puja at the ancestral home and is soon embroiled in murder. There are dark and dirty secrets the Choudhury family hides and which threaten to spill out with the arrival of Parboni (Puja Banerjee). Soon tragedy strikes, with the death of the family priest and the youngest son. Enter the officer from the local police station, Monojit Halder (Rahul Banerjee). The stage is set for a cat-and-mouse game as he unearths chits of paper with cryptic clues stuffed in the mouths of the deceased (and, later, after the post-mortem, a key to the attic in their stomachs!), leading him to announce that four more murders are on the cards. 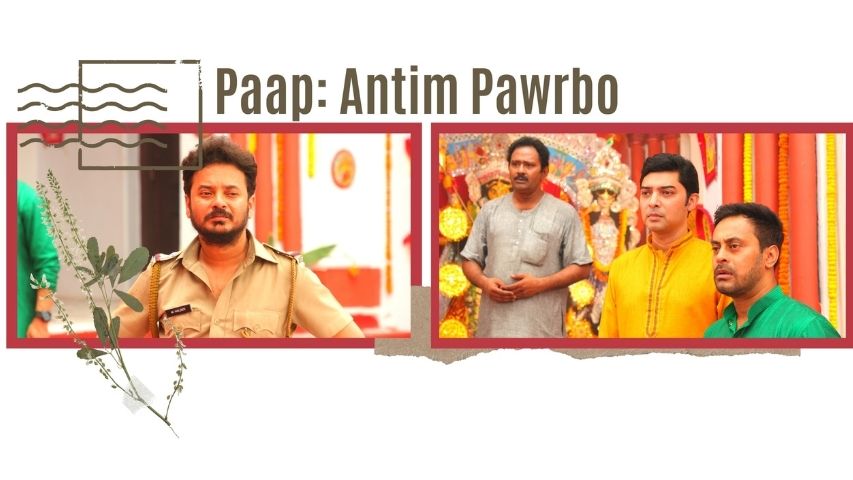 It is apparent from their reactions that most members of the Chaudhury family resent Parboni’s presence. And with good reason too, one realizes, as the narrative unfolds. Queering the pitch is the fact that Parboni has no memory of her past (one marked by horrifying abuse at the hands of the Choudhurys, which gives her the motive), and that witnesses mention sighting a woman with a likeness to Parboni in the vicinity of the murders.

Not all the clues leading to the denouement quite hold up to scrutiny. In the light of the surprise ending, one might reasonably ask: how does one get to be a police officer at a district post all the while without scrutiny? Which police officer will allow a camera crew from a TV station to not only film the investigation but also play a part in it? But given the general standard of writing, the lack of attention to detail is par for the course.

What keeps Paap floating is Rahul Banerjee. As the unconventional officer, he is in good form and has a few throwaway lines that raise a chuckle (dead bodies piling up likened to Indian wickets falling on an Australian pitch or a character fainting at the mention of the attic to Newton’s falling apple) with impeccable delivery. Not all of these are politically correct and the writers do get carried away (the officer playfully slapping two constables!) but then after Damayanti and Mohomaya, I guess, I am in the mood for being thankful for small mercies. 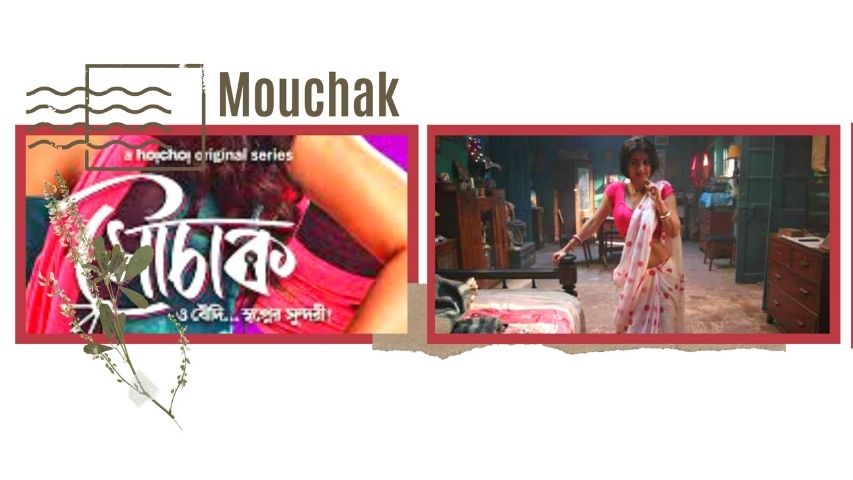 Which is more than I can say about Mouchak. Hoichoi’s adult comedy series Dupur Thakurpo has had an enviable run over three seasons, which could be a barometer of its popularity. Mouchak is in the same sex/adult comedy vein with the content further downgraded to appeal to the lowest common denominator (if that were possible). I began this review mentioning the poor writing in most of the series on the platform. Mouchak plumbs new depths that I would not have believed was possible if I hadn’t watched it.

For all that it is worth, Mouchak deals with the night-long exploits of the local hottie Mou (Monami Ghosh) who has the whole neighbourhood salivating much to the chagrin of her husband Tarak (Kanchan Mallick, a comic star of contemporary Bengali cinema). There’s also Tarak’s ailing mother confined to the bed who keeps hollering for someone to turn her over on the bed and who is force-fed by Mou to the point of choking on her food (mind you, it’s all supposed to be funny).

Given his wife’s ‘wayward’ ways, Tarak is in the habit of locking her up in the house when he goes on tours (never mind that we see him between the sheets in a seedy ‘hotel’ that goes by the delectable name ‘Raat Gayi Baat Gayi). On one such outing, Mou calls on her suitors (each labelled ‘deewana number 1, 2, 3… and so on, one of whom has her number saved as ‘Dhani Lanka’, shorthand slang for what in Hindi cinema would be called an ‘item’). There’s an over-the-hill pot-bellied footballer, an alcoholic, an autorickshaw driver, a taxi driver and a ne’er do well obsessed with buying lottery tickets. A night of debauchery (played entirely for distasteful laughs) ends in an unexpected manner and Mou is left holding the baby, a lottery ticket with a prize money of Rs 1.5 crore and two dead bodies to dispose of, adding a dash of thriller elements to the ‘comedy’. 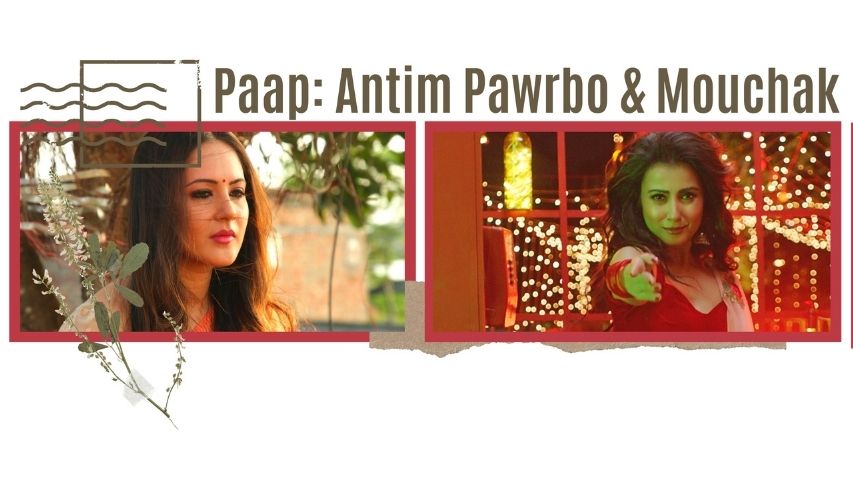 Double entrendes that would make Dada Kondke blush, the kind of juvenile humour and skin show (lead Monami Ghosh’s pallu in perpetual slip-off mode) that makes Kya Kool Hai Hum appear a children’s film, Mouchak is a veritable assault on the senses. Mind you, I love my ‘bad films’ - I am a fan of the Gunda-s and the Mithun Chakraborty/Dharmendra C-grade films of the 1990s, films so bad that they are cult. And black comedies that raise a laugh out of improbable circumstances, incorporating dead bodies and politically incorrect situations. But Mouchak takes it to another level that I found downright repulsive (the indignities Tarak’s bedridden mother suffers in the first episode or the inclusion of the soundtrack of ‘Maar daala’ after a shocking death). Just the words of a song in the first episode will give you an idea: Aaj ke rate jochhane te, keute othe bichhane te, chhobol debe ke… aaj ke rate pedal kore medal paabe ke (in the moonlight today, a krait roams the bed, wonder who will get stung… who will get a medal for peddling all night).