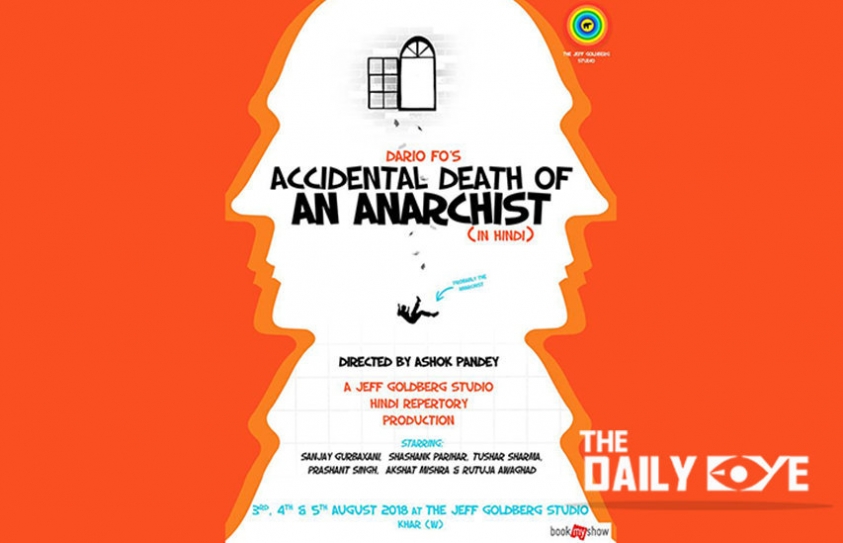 It was the genius of Dario Fo that he could convert a grim tragedy into a farce that makes the audience laugh and feel uneasy at the same time. Even though he was telling stories about his native Italy suffering from post-War political instability and rampant corruption, the themes are universal. 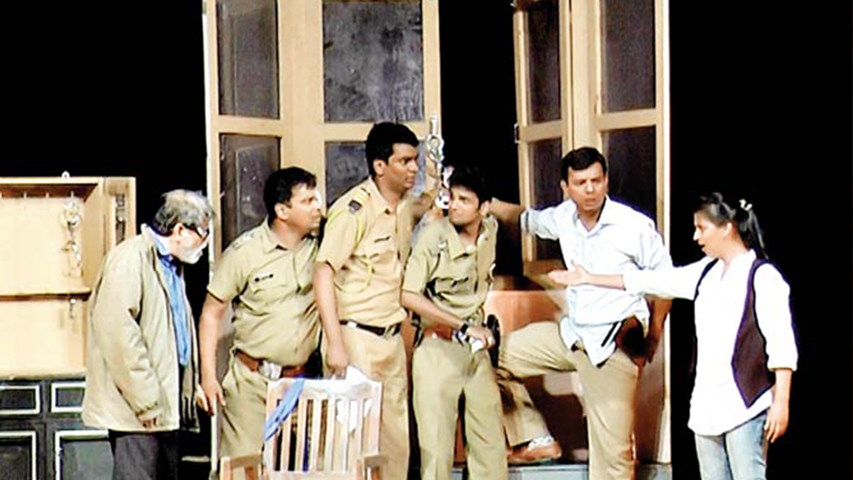 A still from Khidki (Mid-day)

His play Accidental Death of an Anarchist (written in 1970) is a masterpiece. It has been translated into several languages and performed all over the world, because, police brutality and political clampdowns are an ugly reality audiences from every country can recognize. (There have been dozens of adaptations in India, most recently as Khidki in Marathi and Encounter in Gujarati.)

Written as a response to the anarchic conditions in Italy, this play was inspired by the actual death of a railway worker and suspected anarchist in police custody. The cops claimed the man committed suicide by jumping off the fourth floor window, while it was obvious that he had been beaten and flung out to make murder look like suicide or an accident.

A new production in Hindi, by the Jeff Goldberg Studio, skillfully directed by Ashok Pandey brings energy and freshness to the oft-staged play. It is set in North India, where the cops are more uncouth, violent and corrupt than anywhere else.

A Madman (Prashant Singh) is brought into the police station where the incident had taken place.  He annoys the two cops on duty (Tushar Sharma, Akshat Mishra), claiming that he cannot be arrested because he is mad, and gets them all riled up. When the inspector rushes off to a meeting, the Madman snoops through files that give him information about the case. He answers the phone from another cop and learns that an investigating judge is to come to the station. So, changing his appearance a bit, he goes up to the floor from where the man had jumped and pretends to be the judge.

The three policemen on duty, Superintendent Verma (Sanjay Gurbaxani), Inspector Pahuja (Shashank Parihar) and the hyperactive constable (Akshat Mishra) are a bit nervous about the judge’s visit. As the Madman questions them, they keep contradicting themselves. The Madman convinces them that he wants to help them polish up the story and prove their innocence. This sequence gets increasingly ludicrous as the cops’ lies tie them up in knots.

Then, a journalist (Rutuja Awaghad) arrives to interview the Inspector about the anarchist’s death. The Madman impersonates a forensic expert, so that he can help them deal with the journalist. He hobbles in pretending to have a wooden leg, a false arm and a stone eye and in one hilarious scene, has them all crawling on the floor looking for the eye that has fallen off.

The actors, get into the spirit of the farce, and, even in the limited space at the studio, display remarkable agility and comic timing.  This is the kind of play that can never get dated or lose its power.

A still from Khidki (mumbaitheatre guide)