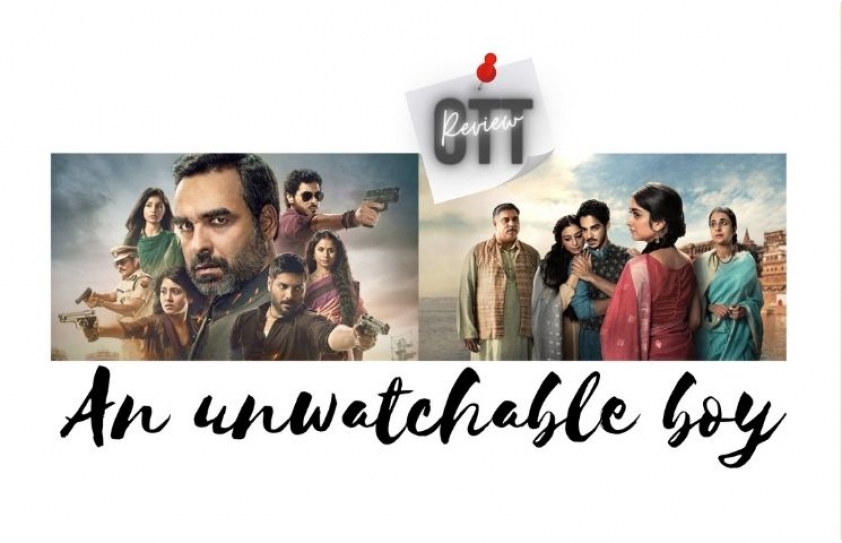 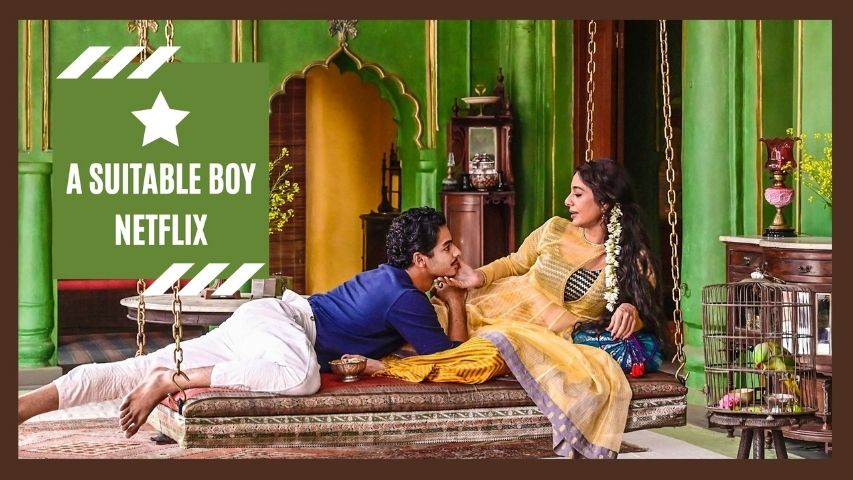 The mini, BBC-petrolled web series, A Suitable Boy, coerces you to wish that you had re-read the masterpiece novel by Vikram Seth - the 1,349-pager first published in 1993.

Reason: The series is just about bearable in spots, heavy-handed and obvious in others, and tries too hard in places. It doesn’t come across as whole because it is way too jumpy, leapfrogging between a caboodle of characters - 110 of them reportedly - which works better in a book where there is more room to expand. Moreover this 6-parter is unsure of its style, which was certainly not the case with the novel.

Regretfully then, no salaams  go out to director Mira Nair or bravos to writer Andrew Davies for this adaptation which shuttles between the anachronistically theatrical and  the  treacly sentimental, without finding a consistent tone.

This is especially unnerving when Anoushka Shankar’s sitar has a wail of a time when interspersed with jaunty retro-muzak for the background music score (the end-credit titles music is a hoot). And oye oye, what the shake-rattle-‘n’-cheese-mayo-roll was done by foisting in C. Ramchandra’s ditty Gore Gore O Banke Chhore (film Samadhi, 1950). Woe betide.

Even if you look at the Beeb production as a rushed-job of cavalierly tacked-together vignettes, the snafu is that you don’t quite warm up to any of its genie-like characters, appearing and disappearing at the rub of a lamp, poof uff. Particularly irksome is the overwrought mother (Mahira Kakkar), who from the very outset wrings her hands and cranes her neck to discover the ideal groom for her daughter Lata Mehra (Tanya Maniktala), who’s rather fond of tossing guavas to a monkey, rather disinterested in the fruit. Tut tut.

The rest of malekind in the fictitious town of Brahmpur, as well as the real Lucknow and Calcutta, circa 1951, however, break into cartwheels over the tender slender Lata - wooing her with poetry, furtive kisses, and so much roasted corn dialogue that she turns into the equivalent of a smiling emoji.  Grin and bear ‘em, girl.

Okay, finally after more approriate suitors than Jane Austen could have possibly conceived, Lata dearie’s prime choice is a Muslim boy (hai rabba) who’s always holding on to a bicycle for a prop, a Bengali versesmith who invites her to poesy readings, and last but the least, an U.K.-returned shoe designer whose skills  have landed him a job in the Czech-owned Praha company (not to be confused with Prada guys, that’s an allusion to Bata). Now, which two of the trio will she say goodbye, ta ta to? Wooh.

Tough question. Because there are quite a few sub-plots to contend with, updated with communal riots to be socio-politically relevant. Erm anyway, cut to a Congress politician’s callow son (Ishan Khatter) who flips heads over Bata heels for the  world-weary courtesan Saeeda Begum (Tabu). Weary since she’s the mistress of a portly Rajah (Manoj Pahwa) who gambols and grunts between the satiny bed sheets. Occasionally, he worries about the loss of his privy purse. Tsk.

And there’s the saga of a morose-faced nawab whose son (Shubham Saraf), with a teenie touch of bisexuality, who goes gaga over Begumji’s daughter, which is majorly scandalous but revealing why would be a spoiler. Plus there are feisty hi-fi women (Shahana Goswami & Party) who revel in adultery or study the piano with an European opera singer.and are often seized by a fit of giggles. Ha ha ho-hum.

None of the dramatis personae, not even the amateur dramatic coach of the play Twelfth Night or a mentally backward kid (the boy’s adorable but is dumped quickly by the screenplay), a village land grabber and a social reform-craving gadbaout, arouse your interest or an iota of empathy. Come to think of it, the episodes wrack and roll on - one of them helmed by Chak De! wallah Shimit Amin. In the event, you don’t care a fig for who’ll win Lataji’s highest votes for the Suitable Boy, to love and hold forever.

For sure, Mira Nair couldn’t have been expected to deliver a series, which is comparable to the book. Deepa Mehta too, had botched up Salman Rushdie’s Midnight’s Children. Still, Nair could have stamped the adaptation with her own signature, which was so strong and legible in her best works such as Salaam Bombay!, Mississippi Masala, Monsoon Wedding and The Namesake.

By the way, the English web-version of A Suitable Boy employs a language that’s stunningly stilted, embarrassing and at points, unintentionally hilarious. Example: Asks  Begum Jaan, “What do you want from me?” to be answered, “Everrrrrything.” Now, you know what that means.

Technically too, you’re hardly elated. The photography by Declan Quinn is so overlit that lampshades burn bright in rooms splashed with god-given sunlight.

As for the much-laureled Arjun Bhasin’s costume design, by and large they’re too FabIndiaish. Shockingly, I own the very same kalamakari bandi worn by one of the back-up musicians to an Ustad classical musician. Seriously.

Closing note: I will not be diplomatic or fakely polite. Mira Nair has given us fantastic, immersive material before. This time around, she hasn’t. Whether what she has achieved here is ‘televisiony’ or cinematic, neither of the approaches wash. It pains me to an extent, to find no redeeming features at all - not even one peformance, which stands out in the motley ensemble.

Indeed, how I wish I had hopped-skipped-and-jumped over this adaptation of A Suitable Boy. Honestly, if you could see my face now, it resembles a frownie emoji. 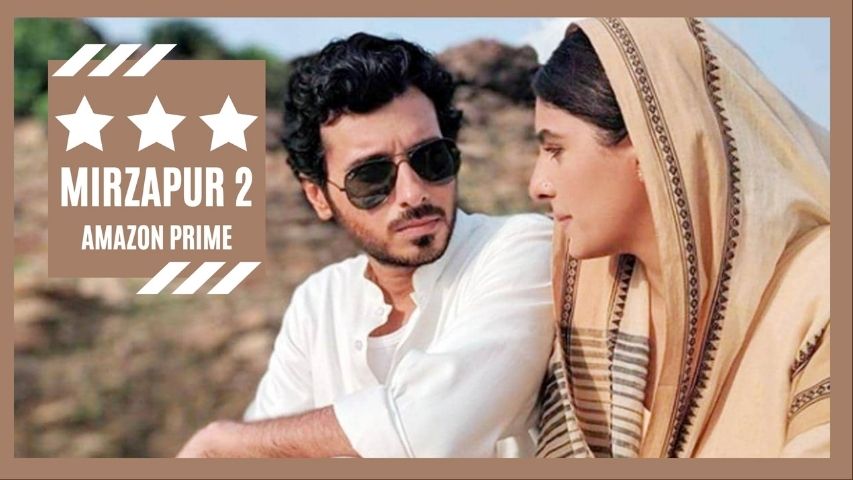 The first evening I watched this no-stops-barred show of ketchupy blood, jaw-smashing violence, a downpour of mc’s-bc’s, sex on paranthas, besides clatter-chatter about drugs, arms running, car thefts and a population explosion of baddies in this Goondapur, I couldn’t sleep half  a wink that night. Ouch, too way over-the-rooftop.

Next morning, I quizzed myself, c’mon you’re not faint-hearted, are you? You’ve seen such rough stuff by Sam Peckinpah, Arthur Penn, Quentin Tarantino and our very own Anurag Kashyap, so buck up ‘ole boy - and I’m glad that I did.

Because, beyond all the multiplying body count, sexual polemics and prickly profanities, a raw, rough and quasi-realistic story is being narrated, centred in the badlands of Uttar Pradesh and Bihar (the latter state’s in focus right now, courtesy the upcoming elections). Ergo, had to complete the ten-episoder produced by Farhan Akhtar and Ritesh Sidhwani, and directed by different helmers who are far too many to list here. My bad.

Right. Zoom back into rival clans, slaying and flailing, to be godpapas of illicit business, a la The Godfather natch. The Tripathi family headed by a wheelchaired grandpa (Kulbhushan Kharbanda, as expert as always), pa (Pankaj Tripathi) and scion (Divyanshu Sharma). On the opposing side, there are politicians galore, cops by the bushel and plenty of Dowdy Rowdies. This scenario too, is overcrowdy.

The most progressive, if it can be called that, aspect of the web series, is that the women characters are neither submissive nor sappy. They may genuflect to the patriarchal tradition but have agendas up their sleeves to turn a life-altering trick or two on the relentlessly exploitative male order. By ‘they’ I mean the lately pregnant bahu of the household, the petite girl who becomes a sharp shooter, not to forget a widow who rises foxily to the seat of the Chief Minister and a secretarial employee whose seductive gambits are a ploy to spark a political scandal. Women of steel, these.

Request: Don’t ask for an indication of the plot though, it lurches wildly throughout. Suffice it to say, the gangster flick has the guts to speak out openly against realpolitik and the centuries-old feudalism, which has to be rescinded right here and right now.

Auspiciously, the entire acting crew is believable and inspired. Of the males, Divyendu Sharma, the buffed up Ali Fazal, Vijay Varma (in an oddity of a double role), Priyanshu Painyuli - as a smooth operator, Anjum Sharma and Amit Sial are in terrific form. And of the women Isha Talwar, the ever-bankable Rasika Dugal, Shweta Tripathi and Shriya Pilgaonkar, are uniformly impressive.

By now it’s no secret that Pankaj Tripathi has patented his cool, low-key godpapa act. With his pursed lips, hawk eyes, hand movements and dialogue delivery, which is a cross between a whisper and a command. Here, Tripathi has to enact an elaborate sequence while conversing about a sexual disorder with a nervous doctor - a lesser actor would have made it ridiculous. Tackling it with a wry sense of humour, the actor hits the godpapa’s weak spot right-on.

Do be warned, Mirzapur 2 doesn’t make for relaxing viewing. Instead it jolts you out of complacency to face a mix of fiction and fact located in an area of deep darkness. Surely worth a dekko if you’re not the sort to be assailed by nightmares.