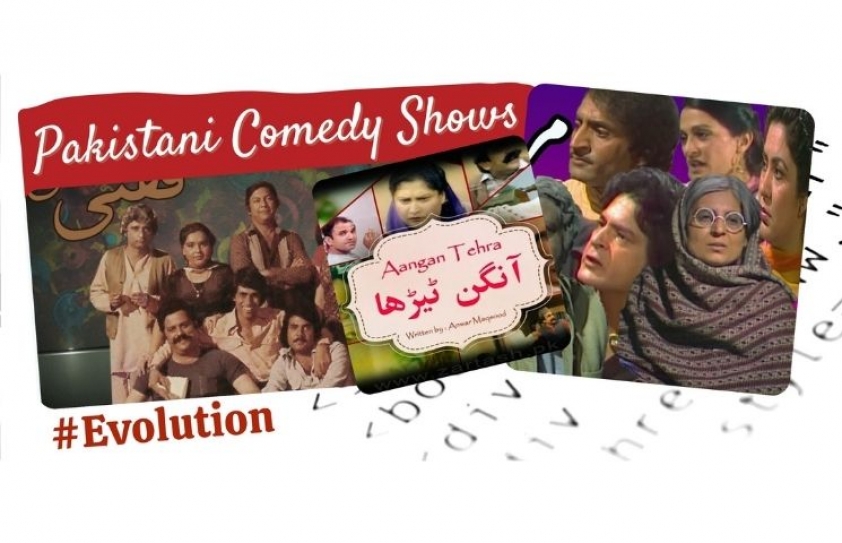 Shafiq Siddiqui walks you through a few comical and satirical TV shows that aired on PTV from the 1960s to the 1980s.

Creativity flourishes in restraints; back in the 1960’s Pakistani media did not enjoy the freedom of expression. And perhaps, this is one of the significant reasons why the kind of programs and shows created back then are way ahead of their time. The command over Urdu language and understanding of societal issues were common things to address in dramas and comedy shows. The satirical shows in Pakistan, aired on Pakistan Television Network (PTV), used to be enjoyed by all i.e., kids, youth, and mature audience. It was not an easy task to enter the TV station and meet the bigwigs of the industry. Quality control was meticulous; not every Tom, Dick and Harry could get their ticket to the entrance in the industry as compared to recent times. Under President Ayub Khan, on November 26th 1964, broadcast from PTV started for the first time in Pakistan.

Alif Noon is one of the most recallable and iconic satirical TV series produced for PTV. The show initially aired in 1965 and then again in 1982. It was recreated by the same team of Allan (Kamal Ahmed Rizvi) and Nannah (Rafi Khawar) and written by Kamal Ahmed Rizvi. The command that Rizvi had over depicting serious issues like hoarding, wheat flour crisis, prevalent scams and frauds in Pakistani society, is remarkable. Every episode used to be based on two characters Allan and Nannah; Allan being the notorious and shrewd character and Nannah being the innocent and truthful person. How only a naïve person is held accountable for every mishap in society was the crux of the show. Alif Noon is a must watch for learning how to write interesting content and add realistic zing to the plays.

In the year 1966, Taleem-e-Balighan, written by Khawaja Moinuddin and directed by Agha Nasir, aired. The story of Taleem-e-Balighan revolved around a maulvi (religious teacher) who used to teach a few students the Urdu language. Students belonged to different backgrounds, one was a pickpocket, another was a butcher and the third was a black-ticketer. The concept of Taleem-e-Balighan was based on three principles highlighted by Quad-e-Azam Mohammad Ali Jinnah, i.e., Unity, Faith and Discipline. The entire show was strong with satire and humor was its main essence. It was quite an eye-opening show for the people of that time and today. Interestingly, Taleem-e-Balighan was first written for Radio Pakistan and then broadcasted on TV. Mahmood Ali, Qazi Wajid, Subhani ba Younus and Qasim Jalali were integral parts of the show.

In the 1970s, the young and creative group of actors and writers including Shoaib Hashmi, Salima Hashmi, Salman Ahmed, Samina Ahmed and Arshad Mahmood, came up with some very hard-hitting and witty satirical shows like Sach Gupp, Balila and Taal Matol etc. The shows laid the foundation for generations to come and follow how to write satire and execute pain-points with decency and without crossing the fine line that is between humor and cheapness. There is no doubt that many Pakistani legends had based their fame and shows by following the footsteps of Shaoib Hashmi’s shows. The quick-witted and simple to understand shows were well received by both the masses and classes and became quite popular back then.

Without a doubt, Fifty Fifty is one of the most hilarious comedy shows on PTV. The show was written and directed by the legendary duo of Anwar Maqsood and Shoaib Mansoor. Fifty Fifty is still very famous in India and Pakistan and youngsters follow those skits and sketches in their college and university functions. Ismail Tara, Majid Jehangir, Ashraf Khan, Bushra Ansari, Arshad Mehmood, Umer Shareef, Zeba Shehnaz and many others got their big breaks from that show. It was a mixed bag of slapstick humor and witty one-liners with Urdu and Punjabi punch lines scattered all over.

Ather Shah Khan’s Intezar Farmaiye aired in 1975 and it was a comedy show that first introduced the character of Mr. Jaidi (played by Ather Shah Khan) and it also marked the first TV drama appearance of Moin Akhtar as Raja Pehalwan. The TV show became an instant hit and was readily loved and liked by kids and youngsters. The beauty of the show was in the characters that were written by Ather Shah Khan and how he infused simple yet hilarious instances extracted from real life examples. The art of writing was fresh at that time and this made it so successful and easy to connect with. The show was 16 to 17 episodes long.

The TV show that made Anwar Maqsood the most sought-after writer was Aangan Terha. Aangan Terha was aired in 1984 and featured Shakeel, Bushra Ansari, Salim Nasir, Durdana Butt and Arshad Mehmood in pivotal characters. Legendary actors like Mehmood Ali, Moin Akhtar and Lehri also did a few episodes and were loved by the viewers. Aangan Terha is one amazing satirical show that highlighted the household problems of a retired government officer and it also depicted societal norms with a pun. Characters were beautifully written, and the dialogues were witty. Every dialogue from this TV show was brilliant in terms of accuracy and command over Urdu language. Undoubtedly, the 12 episodic Aangan Terha is amongst the best of Anwar Maqsood. Salim Nasir is such a delight to watch in every scene.

Mirza and Sons was aired under the Drama ’84 series and was written by Anwar Maqsood. The drama was based on an elderly couple who had four married sons Khayyam Sarhadi, Anwar Ali, Aurangzeb Laghari and Qavi Khan living with their kids and wives under the same roof. The long play sheds light on the lives of common people living in Pakistan with many dreams and how their lives give them a bummer and reality check. The drama is worth a watch for witty one-liners, and great characterization backed with their own ideation and inspirations. It’s a must watch and also available on YouTube.