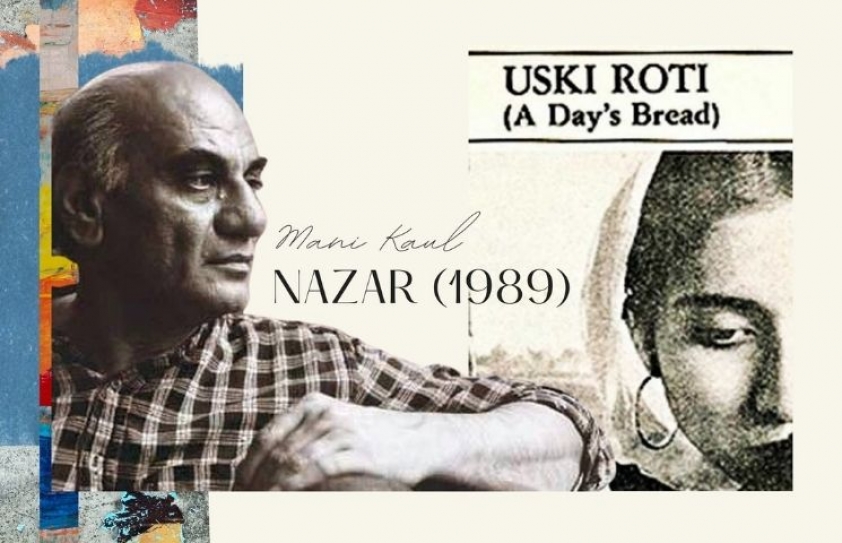 I had just passed out of FTII in 1989 and I was on my first feature as the Assistant Cameraman, reminisces Rafay Mahmood

I was the only Assistant to DOP, Piyush Shah, and the whole unit worked like a large family. We used to assemble at an  NFDC office in Walkeshwar called White House for a month long pre-production schedule. So one was a part of the filmmaking and not just the camera work. Mani Kaul, the director of the film, had worked out his own methods of elaborate pre-production on all creative levels. He talked of everything, which influenced him. There was an excitement in all his ideas. Dhrupad, Mir Taqi Mir, Matisse, Cezzane and of course Dostovesky, whose ‘Meek One’ was being adapted became the inspiration for the film Nazar.

Focus pulling is a thankless job; you are noticed only when you make a mistake! Mani announced in one Pre-Production meeting that the actors will be free to move around and that no marks were to be given to them. He said it casually - there was no sense of throwing a warning or a challenge at me. But it immediately sent alarm bells ringing in my head.

I  promptly asked: “So will it all be wide lenses?”

Mani: “No Tele lens as well… all lenses. And I prefer if we dont keep using the focus tape. Ek andaaze se kar lena.”

He also told Piyush that he would like to work with the principle of “any light whatsoever”, which meant that we would pre-light the space without knowing where the characters were going to be. And then there was this idea of closing the viewfinder to explore the de-framing of the composition. I never saw these ideas as some idiosyncratic obsessions of his filmmaking. I could understand what he was trying to do. But I was most worried about the ‘focus thing’. I really thought that neither Piyush nor Mani had put enough thought on the issue of people often seeming ‘out of focus’ in a full length feature film.

I  was determined to ward of the possible unforeseen focus mess on my very first job. So immediately, I started practising the basic distance guessing exercises on the terrace of White House, which overlooked the beautiful Queen’s Necklace on Marine Drive in Bombay. 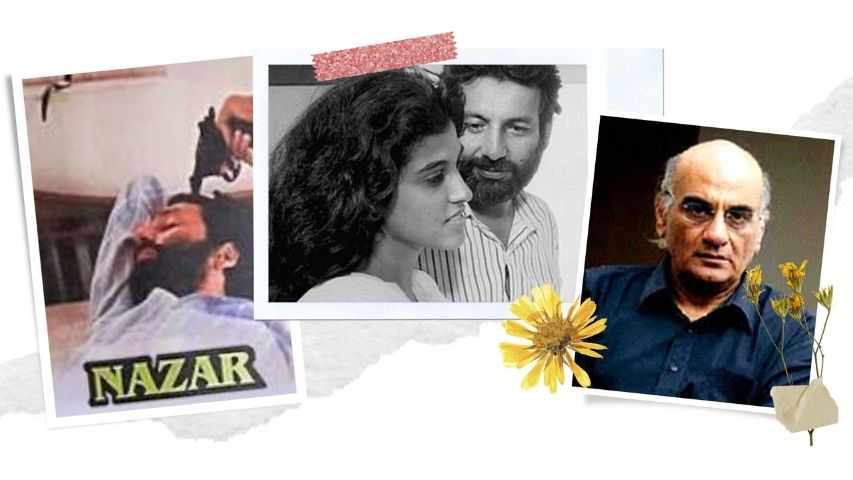 The first few days of the shooting were in an Antique-shop on the Napean Sea Road. I could see that Piyush had easily adapted to a radically new way of lighting. He was actually lighting by his eye and in the most unobtrusive manner without getting any big light into the shop. He had already spent enough time with Mani and it seemed like he had no fear of ‘exposure issues’ that came with slow film stocks in those days.

Mani tried to close the viewfinder and move the camera in the first few days of the shoot. But because there was no video assist, he did not feel very comfortable about it. (This exercise had to wait for a few more years till ‘Naukar ki kameez’ was made. The closing of viewfinder was symbolic of how he viewed Cinema. I thought - one makes the intention of the movement but does not force a preordained conclusion upon it).

I was also given the additional responsibility of taking colour stills for every shot of the film, while Lalitha did the black and white stills. Just on the third day of the shooting, Mani pointed out to me that I should stop trying to imitate the non-framing I was doing in my stills. He gently told me that it was not working because still photography was a medium, which was dependent on space and composition. Though a bit taken aback by his criticism I saw the point he was making.

By the time we moved into the  South Bombay flat where about eighty percent of the  shooting had to done, I thought I had figured out how things were happening on the sets! The first day of  shooting in the flat, which was supposed to be the house of antique seller (Shekhar Kapoor), gave a bit  a jolt to my just found comfort. The first shot of the film was being prepared. The camera was in the bedroom where the body of ‘meek-one’ – the antique shop owner’s young wife (played by Shambhavi Kaul) was lying  and the shopkeeper moved in a corridor outside the door ranting and blaming himself for her suicide in a disturbed manner. Obviously Shekhar was going to move anywhere in the depth of the corridor and by the rules of the game, I was not supposed to take any focus marks. But I had it all worked out so I was ready to follow him because like most focus pullers, I thought I had developed a good judgement on distances by then. But then Mani asked me to keep the focus on the flying curtain in the foreground on the door sometimes.

I promptly asked: “So I begin with the curtain and when do I shift to Shekhar?”

Mani told me to keep the focus to my liking… whatever felt better in the moment; and I need not keep him in focus always! 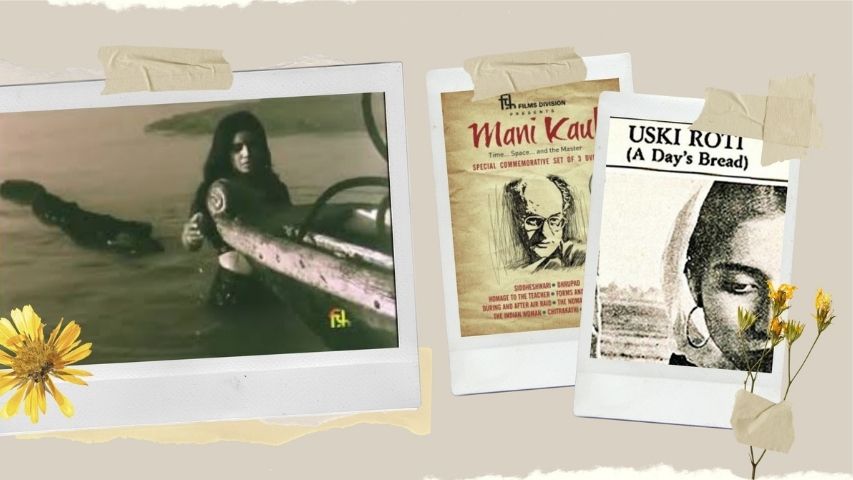 This  incident became a bit  memorable for me because a few years later I found myself recounting it to Cinematographer friend. What my friend observed was that it was amazing I could be trusted with the first shot of a film by a Director. Trusted not to deliver his precise intention of focus for the shot, but that my subjective interpretation of focus was bringing something to the film.

Back then this small incident may have dented many filmmaking notions I carried and also took away a lot of fear about trying out things . So I do think certain experiences on this shooting with Mani Kaul had staggering importance in giving me freedom in all my work subsequently.

Mani worked with the shot. The shot is the basic unit of  filmmaking. He talked of the shot and camera movement in the most inspiring way and it was never esoteric for me. In his career he kept redefining what the shot meant for him. In Uski Roti it was a concrete thing  defining physical space in a static composition. By Sidheswari it was a carrier of movement. By Nazar he was looking for the unpredictable in the movement itself. The shot was more than a tilt, a pan, a dolly or  it was a combination of all these movements.

Having embarked on his fascination for movement with Sidheshwari, he was now on the verge of discarding even that bit of formalism. In this new scenario the shot was to be a piece of unpredictable energy; carrying undifferentiated subjective emotion in time. His formalism was similar to the way of the modern painters who in late eighteenth century started to deal with the canvas, the brush stroke and the nature of pigment as the core reality of their medium. The reality of the medium was as important as the subject they portrayed. In fact the painting expressed the deeper reality of the medium itself and thus gave them a new dimension to the existence of the subject.

And so there was still time before Mani could stand on the stage and declare that in cinema ”the image is dead”. In Nazar, one last time, he orchestrated the beauty of movement in space with his participating cast and crew!

Mani would sit on the dolly and work out a complex shot. There was no video assist at the shooting. He never asked Piyush to imitate the rehearsed movement but to regard it as a basis for carrying out his own movement with it. He did not seek any repeatable moment. The movement of the shot was a possible dance between the intention and accident that happened in the course of its taking. In fact there was no retake and a repeated shot was regarded as a new variation with a  new number on the clap! 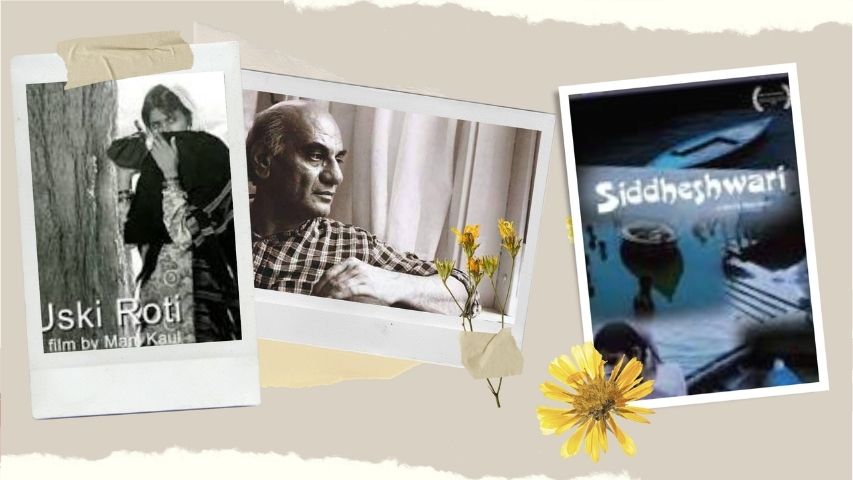 Working out his shot with the dolly pusher (whose name was also Mani) was a deeply involved exercise for him. One day while working out the movement, he paused and look up from the viewfinder. He looked at an elderly light-boy by the name of Dawood holding a net under the light, which he was supposed to move up as the shot progressed. He looked at me wistfully and  told me how he wished he had the courage to include the greying Dawood in the shot. Perhaps  he was seeing Dawood as part  reality of the moment of the shot.

Mani was prodigiously gifted in visual arts but he was always resisting getting attached to any possible formal perfection that he was reaching. In his own words he was seeking to break the divide between the ‘sacred  and profane’. He said he was not celebrating empty formalism but sought a deep connection to the emotion in his heart and the shot he was making. This was a bit like Cezzane, the painter who struggled painfully to express his innermost feelings on the canvas  but was  often criticised in his lifetime for being cold and unemotional!

The negative was processed in Prasad Labs in Madras. Once the shooting had finished, I had a long dreadful time waiting for the rushes to come. I developed a morbid fear that a lot of the film will turn out to be ‘soft focus’.

After a couple of months I eagerly went to see the cost  saving  black and white rushes and to my relief, I found most of the focus was in place. When I went to see the edit of the finished film, Mani pointed out a moment in which he had held a shot just for the focus to shift.  He really embarrassed me by speaking highly of the focus pulling. The colour print had some stunning images that I had ever seen till 1990.  Unlike Siddheshwari, this film was not received well as far as I remember. There was considerable criticism but Mani, after one of the screenings, called it a ‘little gem and bit ahead of its time.’

Post Script: I often think of Nazar and feel I was lucky to be working with Mani and some other very good people on my first project. When I saw a print of Nazar at FTII last year, it was heartening  that the students related with the film and its imagery. And I did feel its focus shifting with ‘nervous edges and hesitant hands’ were just the right mix for the tender tale called  ‘The Meek One’.