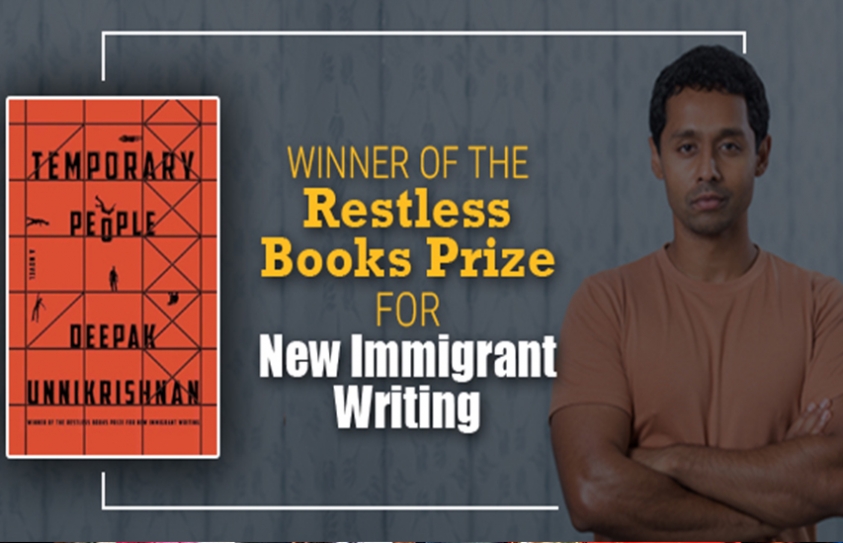 A few years ago, there was a huge wave of workers going from Kerala to the Gulf countries in search of better prospects. It would not be wrong to say that some of the glittering cities of the region were built by the sweat and blood of men (and some women) of God’s Own Country—with the highest literacy rate in India, yet unable to provide suitable employment to its people

At the height of the Gulf boom, Kerala witnessed unprecedented prosperity, to which stories of broken homes and loneliness of the Gulf widows were attached. But hardly anyone saw the problems of the Malayalee (they led the migration to the Gulf countries for work) in a strange land. People envied the money they earned, so brushed the rampant exploitation and racism under the carpet.

Deepak Unnikrishnan’s book Temporary People looks at grime beneath the fabled gold-lined streets of the UAE. He says of writing the book that won him the Restless Books Prize for New Immigrant Writing, “Temporary People is a work of fiction set in the UAE, where I was raised and where foreign nationals constitute over 80 percent of the population. It is a nation built by people who are eventually required to leave.”

The book comprises short stories, poems and one bitter rant-like listing of all the work the Malayalees do in the Gulf, that ends with, “Cog. Cog? Cog.”

The stories use a lot of magic realism with a playful use of language, but the tone is angry, disappointed, often helpless. Like the allegorical story, Birds, in which a Malayalee nurse goes around fixing the men who have fallen off buildings they have been working on—clearly, they are looked upon as subhuman and no safety or medical facilities provided for them.

In the darkly humorous Mussafah Grew People, workers grown from pods and given a 12-year shelf life. Two stories are about cockroaches that develop human characteristics and learn to survive insecticide attacks. The Indians working there are quite aware of their second-class citizen status and learn to avoid rubbing the ‘Arabees’ the wrong way—when an Indian boy is brutally beaten and left in a coma, the perpetrators, who are locals, are let off.

The most disturbing is Mushtibushi about child molestations happening regularly and with impunity in a building inhabited by Indians. A 12-year-old girl, too worldly wise for her age, is convinced that the lift in which the incidents take place is the culprit, perhaps because the truth is too awful to contemplate.

Joseph O’Neill’s 2014 novel The Dog revealed that Dubai was not the gold-tinted paradise that it was made out to be, but it was a white man’s perspective—a man who did not emotionally invest in the land and always saw himself as a somewhat superior outsider. But the ‘temporary’ people in Deepak Unnikrishnan’s book look up at the rapidly growing cities they build from the very bottom rung, and know that after many years of living in the UAE but not quite belonging, they might not even belong to their own towns and villages when they return. They form the ‘Chabters’ (as the Malayalee would pronounce chapter) of Unnikrishnan’s heart-wrenching book.