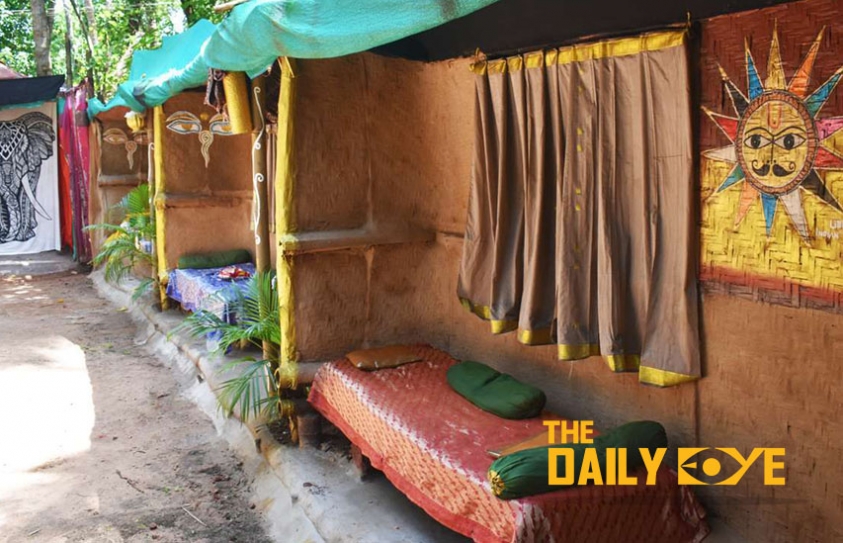 In a small part of Goa called Arambol lays a quiet and peaceful wellness retreat called Little Indian Village. Situated just a few minutes from the Arambol beach, this retreat somehow manages to completely isolate itself from the hustle bustle of the outside world, all the while gaining immunity against commercialization.

Based on the traditional Indian ideology of 'Atithi Devo Bhava' or 'guest is equivalent to God', this humble abode is run by Mr. Soni, an Indian national, and Jelena Konovalova, of Estonian-Russian descent. These two business partners have conceptualized and successfully executed a hotel that takes you back in time, not just figuratively but literally. Before I get to what I really mean by this time travel, allow me to dial back a few years and explain how this came to be. 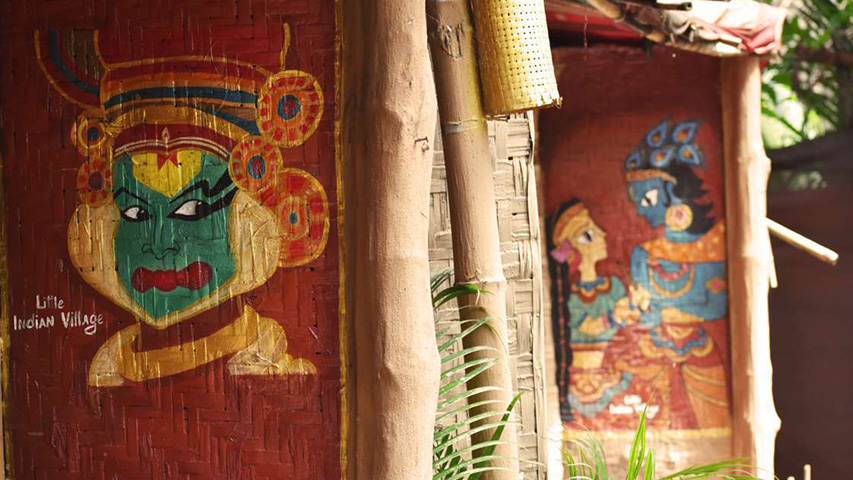 Mr. Soni, a skilled musician, was one of the many artists who began the hip-hop revolution in India, specifically in Mumbai during the mid-90s. Once considered a ‘rising star’, he released a few albums with record labels such as EMI Records and BMG Records, boasting his surreal hybrid of traditional sounds with modern beats and lyrics. Having worked with many senior composers, he quickly learned that India has innumerable unique musical styles and instruments, all yet to be familiarized internationally. Thus he traveled all across India for about 12 years, learning folk music and Sufi from local musicians, as well as the many Indian instruments that they used.

Living in a rural society, deep-rooted in traditionalism, he began taking up developmental work like building houses and learning to make items from clay and wood. During his travels, he also grew accustomed to their way of living, ingrained the idea of 'Atithi Devo Bhava' and deduced that the people living in villages are considerably more immune to diseases and physical ailments caused by hard labor than city-bred folk. He soon realized that the way they prepared and ate their meals preserved the essential nutrients in it. Mr. Soni learned the ancient art of healthy living from people in the various villages like bone setters, massage therapists, village doctors, carpenters, painters, craftsmen and many more.

This newly attained knowledge is known to trace back to the Vedas, the age-old scriptures from the ancient Indian civilizations. The teachings of the Vedas were passed on through generations of people and eventually, transferred to Mr. Soni. 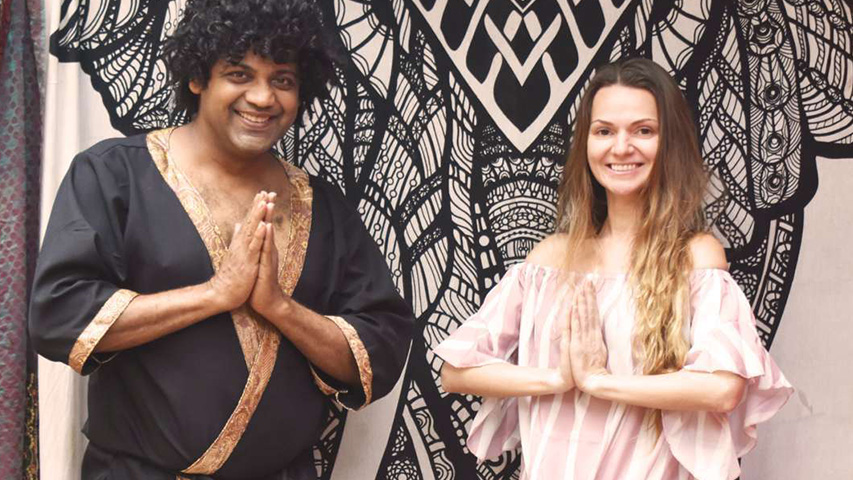 While medication and Ayurveda promote the cure after the ailment, the aim of the Vedic teachings is- prevention is better than cure. Although it would be quite a while till he could translate this knowledge into practice.

Fast forward a few years, he decides to spend some time in Goa learning from international artists. This was a time when EDM music and psytrance parties were taking over. It is around this time that he meets Jelena Konovalova, an Estonian-Russian woman, whose keen interest in Ayurvedic medicines piqued his interest. Jelena worked in a renowned hospital in London before coming to Goa. The two met through a mutual friend and ironically through Mr. Soni's music, the duo hit it off.
Consequently, with Mr. Soni's knowledge of traditional Indian medicine and Jelena's knowledge of modern medicine, a business partnership and a friendship was born. Jelena paused her career and moved to India to pursue a business venture and bring about change in a unique way. They decided to rent a plot of land near a quaint beach named Arambol and put to use their combination of skills. Soon the two would ideate and bring to life the time machine known as 'Little Indian Village'.

Mr. Soni and Jelena began construction on the plot of land all by themselves. He harnessed all that he learned via his travels and constructed every single house on the plot using nothing more than natural resources. With traditional village culture and architecture as his inspiration, he constructed the walls out of clay, and the pillars and roofs with bamboo shoots and palms. This was all done by hand and without any labourers. Jelena decorated and hand painted each room with elements of ancient Indian art, inspired by the various cultures, mythology, religious beliefs from all corners of India. The edges of the houses are curved, projecting a homely vibe, oblique to serenity and peace for all who enter. The windows and entrances are draped with luscious traditional silk sarees. The aim of this design was not only to encapsulate and replicate the depiction of the true Indian culture but also to give all those who enter the experience of living a humble and healthy lifestyle, just like the people in the villages live. All who choose to stay here are treated as equals by Soni and Jelena. They share an informal bond with their guests, promulgating the idea of 'Athithi Devo Bhava', in a modern context.
The majority of their customers are international, majorly Russians and residents of the UK, who work in conglomerates at a desk job and live a monotonous lifestyle. They come to Goa searching for their inner self and Little Indian Village helps people attain inner enlightenment by taking them back in time, allowing them to be one with nature. Many hotels or houses in Goa try to offer Indian culture as their marketing angle but fail to successfully capture the essence, while others rely on a lavish lifestyle with amenities at their beck and call to achieve a minimum standard. 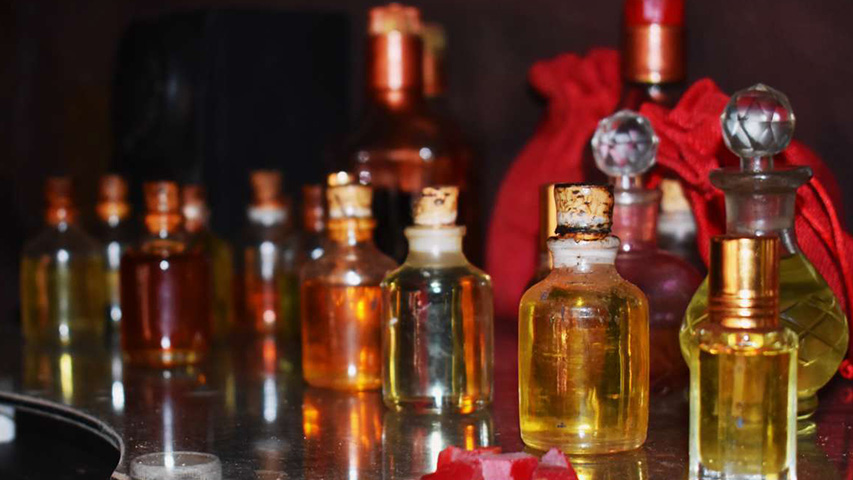 This humble abode, contrary to your typical hotel, ingrains a sense of society among the guests and everyone is encouraged to interact with one another. The only thing modern about the Village is the bathrooms that have a shower and an English commode, a mandatory luxury. Jelena practices and teaches yoga every morning to the guests and Soni invites them to help make lunch, promulgating the idea of healthy living. The experience of living in an Indian society or with an ancient Indian family is recreated at Little Indian Village. But Indian culture and traditionalism have its rules too. Since the idea is to find your inner self and better one's lifestyle, no drugs or alcohol are permitted on the property. Walk-in guests are not allowed and all guests need to reserve a room prior to their stay. Moreover, the duo only allows people they deem fit to stay with them.
Soni and Jelena rely on word of mouth rather than advertising and they believe that their hospitality and passion for Indian culture will speak for themselves. Since the inception of the wellness retreat in 2016, Little Indian Village has gained a lot of popularity overseas and has spawned many happy customer reviews. During season-time, this village is brimming with guests.
Soon the duo will be venturing into something a bit more medicinal and beauty related. Something that they describe as an anti-aging formula. They are already working to produce a line of natural products and creams made from items sourced from the various parts of India that Mr. Soni visited. This coupled with Jelena's medical know-how will give life to a range of products and treatment that will de-age a person 8-10 years and this is what they consider the future of their wellness retreat. Mr. Soni and Jelena are considered pioneers in massage therapy, relaxation and anti-aging by their guests and customers alike.

Having seen this first hand, I know that there is a bright future ahead for this venture. Because the more modern and complex we get, the more we will desire to go back in time to simpler days, happier days.