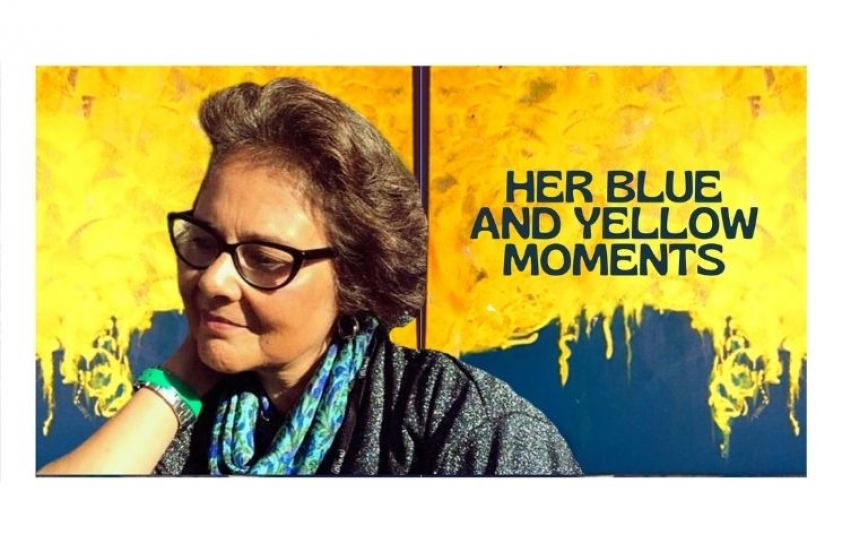 Vinta Nanda visits Sita Rattan’s canvases and explores the well of consciousness that she draws out her art from.

Sylvia Plath captures the unsettling mood of a de Chirico painting with her poem, The Disquieting Muses. And these lines that follow from her poem capture, for me, the inquietude that Sita Rattan shuts out from the space you inhabit at the time your attention turns to the several pieces of art she has created.

I learned, I learned, I learned elsewhere, /from muses unhired by you, dear mother. /I woke one day to see you, mother, floating above me in bluest air on a green balloon bright with a million flowers and bluebirds that never were, /Never, never, found anywhere. /But the little planet bobbed away/like a soap bubble as you called: Come here! /And I faced my traveling companions. /Day now, night now, at head, side, feet, /they stand their vigil in gowns of stone. /Faces blank as the day I was born, /their shadows long in the setting sun that never brightens or goes down. /And this is the kingdom you bore me to mother, mother. /But no frown of mine will betray the company I keep. 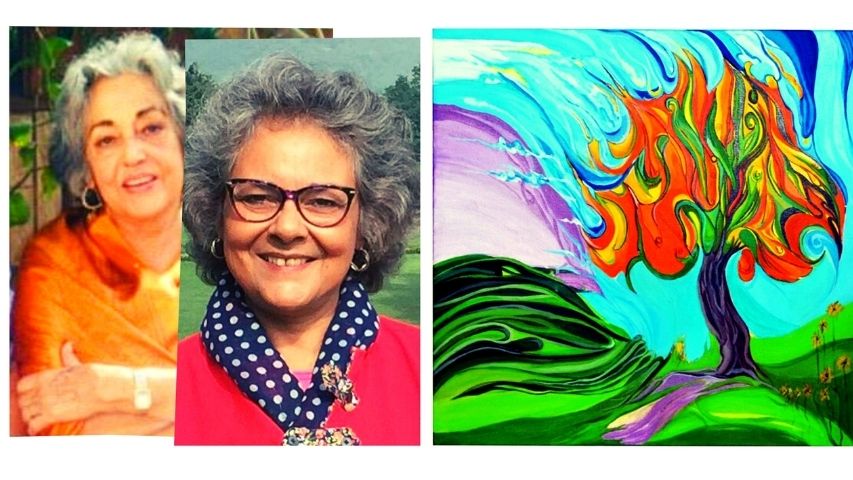 A woman of very few words she is, because when I sent her the questions to answer, I was expecting, perhaps, too much? What she returned to me was just a few lines in response. And, as I read her replies, I warn you here, that you too like me shall read them over and over again. I asked her for some pictures of herself and she said, I’m in the art that I’ve sent you. I had to push her to send me at least one picture of herself and one of her mothers – who is obviously a huge influence upon her work.

However, I have taken the liberty to pick up some pictures of hers from social media, to complete my piece, which would otherwise have remained slightly vacant. 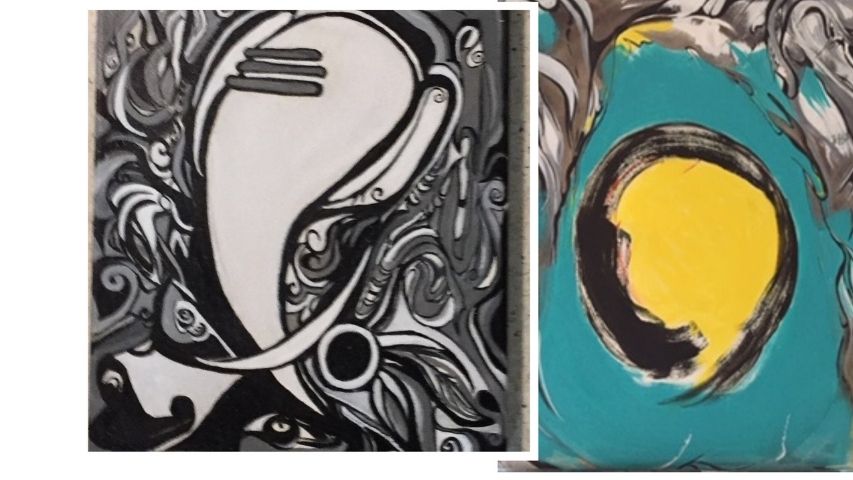 Over to Sita Rattan and her art then…

When was it that it struck you that art is a leveler? Was there a trigger to the realization? And if yes, what was it?

I’ve doodled, painted ever since I can remember. My mother was a huge encouragement. She said, ”Just paint!” I did not have a trigger consciously, but it’s comforting to relate to the paints and has always been that way.

What drives you to your canvas these days?

These days I’ve painted more and I think the forced isolation has been largely responsible! I’ve realized it’s very meditative to just use the brush and fingers and not control the strokes!! It’s almost childlike and that’s a nice feeling.

How often does Kashmir figure in your works? And how? Tell me a little about your background, your life in Kashmir and how you process it today when Kashmir is at a distance from you?

Kashmir is in my soul. The colors, hues… sound of water… the taste, darkness and light! The sunflowers’ canvas is closest to my heart.

These sunflowers were painted whilst sitting in my mother’s attic and with a view of her wildly chaotic, yet organized garden! It breathed every breath of the valley. That day was a very bright, lazy afternoon! 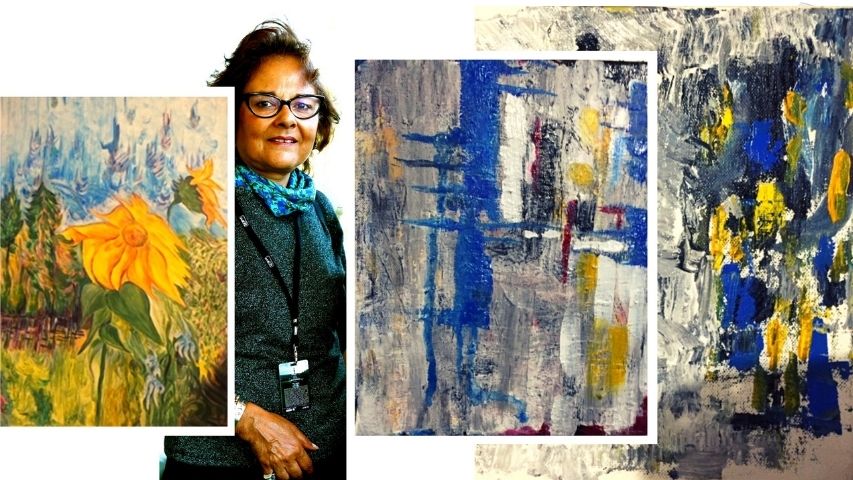 Your job has taken you across the world. Which for you is the place that beckons you every now and then?

I’ve always liked London. However deep down inside of me, the valley does beckon now and then!

Which are the pieces of art (or artists) that influence you?

My favorites are Van Gogh, Miro and Kandinsky.

How have you coped during the two lockdowns?

Lockdown has been one of the biggest challenges I have faced. The first time it was cook, clean and survive so in the beginning it was an adrenaline rush. Then the dark quietness crept in and one had to process it, which was hard. I live on my own, however this sort of solitude was different. I did find myself spiraling many times. Being aware it is happening to oneself is one of the most important things. I realized I had a lot of strength within, and began to believe it. That helped a great deal! My family was hugely supportive as always. 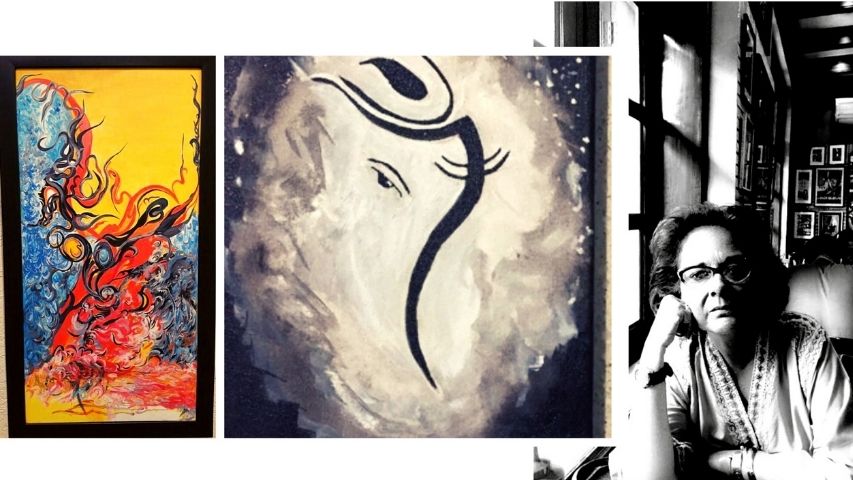 How have the several events in the last 18 months found their place in your art?

During the last 18 months, my dining table has been converted inadvertently to my “go to paint corner”. The brush has a life of its own and the strokes are not controlled! I guess it’s the subconscious breaking out of confinement!! I believe there is a power out there that listens and has it planned!

We read about saying Gratitude... believe me it works.

You can get in touch with Sita Rattan here: greenlotus11@gmail.com