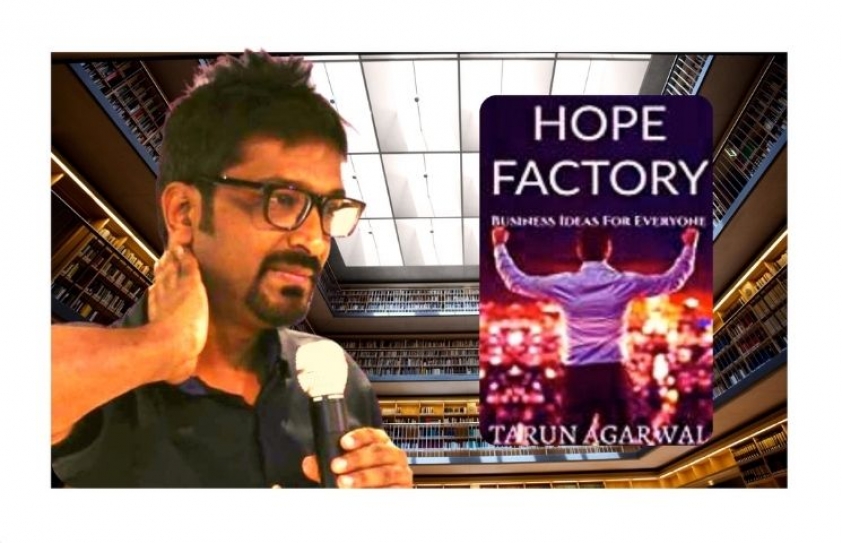 Vinta Nanda chats with Tarun Agarwal, author of Hope Factory: Business Ideas For Everyone, about his latest book and other things.

Hope Factory: Business Ideas For Everyone is a book that is based on the premise that there is a business idea for everyone that can provide a sense of purpose to one's life. It is a supermarket of ideas in which one enters to discover possibilities no matter what the vocation, stage or circumstances of the reader. Tarun Agarwal, the author of the book,  is currently Founder & CEO at Icon Business Forum. His writings have been published by The Statesman, Free Press Journal and PEN.

I have here a short but powerful conversation with him to present the author to you as a prologue to a couple of excerpts from the book, which I suggest everyone must read. Over to him then…

What was it that compelled you to write this book?

The book idea was developed a couple of years ago with a view to express in simple words how work life can be reshaped by embracing technology, startups and the internet.

I had been organizing popular startup conferences and also had achieved some result in using open-mic events as a fulcrum for empowering talent meaningfully. The idea of the book came from the fact that we should now move from being a private, offline affair to being ready to face the public at a larger scale.

The pandemic made this book a priority project as I felt that now is the time to contribute a pool of business ideas to whoever is looking for them. At the time of writing the book, I also began to realize that now is the time to express in words the reasons why a businessman is deeply committed to being one. The book became a medium to drive home the point that empowering business enterprises is the key to reviving the economy both at a personal as well as in a larger context.  A book is a medium to express oneself deeply and bust some myths and myopia with empathy.

Tell me more about your book?

Hope Factory is based on the premise that a business idea can be the key to overcoming a feeling of despair and to give life a sense of purpose. 'Hope Factory: Business Ideas For Everyone' lays out the various options a person has in front of him.

The book does dwell on expressing issues and bottlenecks but it lays a lot more emphasis on the possibilities. It tries to stay away from being an advisor to policy-makers and be more of a friend to the individual.

We frequently discuss the power of politics; social work, journalism and art in defining the world, but in developing countries we may be taking for granted the role that business ideas play in guiding our destinies.

Early readers of the book have found it a uniquely engaging read for a business book. I have used examples from my own first hand observation and some popular ones too, to explain various concepts. The book attempts to suggest methods to arrive at a breakthrough to people of every stratum - be it a Mukesh Ambani or a common man. References from Bollywood are drawn quite frequently to explain various ideas. 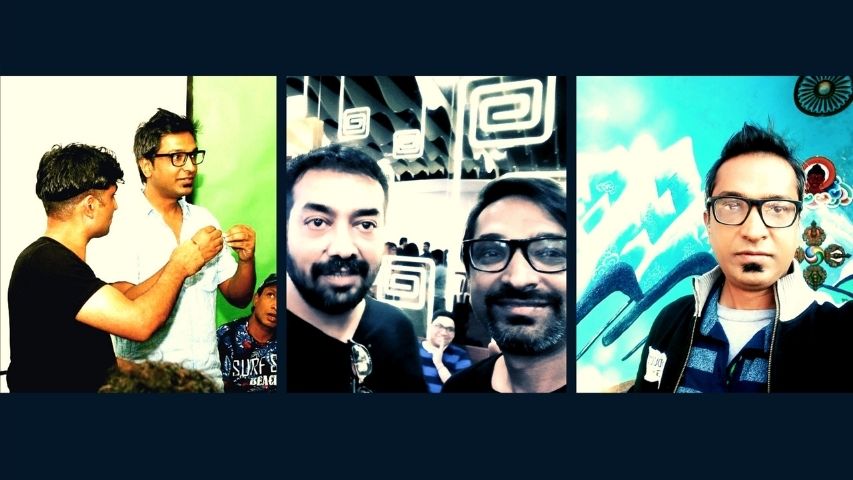 Where are you at this point in time professionally?

I founded Icon Business Forum six year ago. I organized full day startup conferences, open-mic events and issue-based events, writing workshops and educational courses under it. We have been able to help each other quite a lot by forming an ecosystem that remains engaged at various levels. Let us say, we have been able to add some happiness to hundreds of lives through our efforts and support for our work remains rock solid. Icon Business Forum also draws revenues from business consulting.

I feel that as an organizer of events, I have lived the life of an art-house filmmaker or a theatre group, after having developed a small but intensely happy community. There comes a point where you decide to put your craft into more publicly available formats. To that end I have got into books and short films; alongside pushing 'Hope Factory: Business Ideas To Everyone' and a satirical short film I have made called 'Honesty Weds Dishonesty', starring Major Ali Mohommed Shah, which has been licensed to an OTT platform. We will make more short films rather than venture into feature films/web series. We have done some pilot level work on live-recorded events and after the pandemic is truly behind us, we will do those too. The aim remains professionally, to shine in darkness.

You probably have sources of income you have ignored. Like writing or graphic designing or selling some product, which you get from somewhere. Perhaps, you have a hobby that you have not commercialized. To deal with disasters, it is best to commercialize whatever can be. Many of the talents you have previously shared generously for free can be explored to be exploited for a fee.

Elsewhere, in the book, I have written about how India changed its financial destiny by liberalising the economy in 1991. Many industries, which were nascent, became big and took over traditional businesses. In the same way, explore ‘self-liberalisation’ – there are, perhaps, sources of income you are letting go because you feel they are too much beneath your esteem. Maybe, you are in a position to get work for someone else and you can make money out of that. So, explore these options by acting on them and not merely thinking about it.

Freedom is always to be taken. Freedom will not cause chaos. It will cause more choices. What can you do if you do not have a choice?

When building an architecture for an economy, the common man is often unaware of how policy impacts his economic growth. As we know, there are some countries, like America, where almost everyone who tries becomes a success. There is a quality in America, which makes it possible for entrepreneurs like Bill Gates, Mark Zuckerberg to come out of nowhere and become the richest folks in the world. In sharp contrast, most third world countries are such where very few entrepreneurs really succeed in making money. In many such countries, government jobs are the dream option. This is because in such countries, there is not much freedom for the private sector. In many of these countries, almost all sizable businesses require intensive lobbying with the government to take off. Often the attitude in many such countries, of a sizable majority, is that business people are thieves, or they do something unethical. However, when these superstitious ideas are overcome, extraordinary results take place. 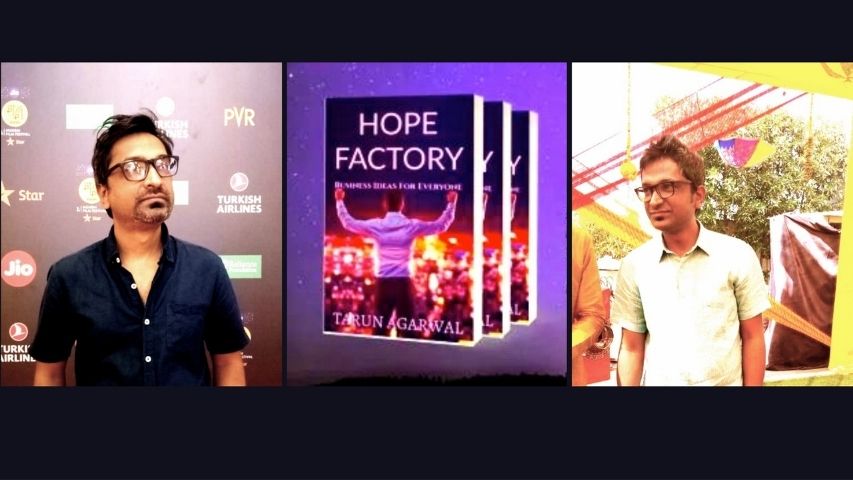 In India, until 1991, there were only government television channels. That year, the government agreed to de-license the industry and let many new players enter the television business. In a few years, those who were working in meagre means in the film business, were making unheard of money because their skills were relevant to the television industry. Newspaper reporters who were having difficulties in making ends meet got salaries they never imagined possible. Allowing the television industry freedom was a chain reaction that made advertising agencies making manifold times more advertisement films. So, this industry also witnessed an employment and entrepreneurship boom. Before these freedom-allowing reforms, the same artists who became rich or well off were making a miserable living.

China is another country that grew on the back of private sector freedom. Today, Chinese entrepreneurs have not only developed their own digital businesses, they also make enough profits to invest in businesses across the world.

Thus, one of the key requirements to develop a vibrant economic architecture, is private sector freedom. In many developing countries where freedom was given, there have been problems as government attitudes are not so stable. They have suddenly applied breaks. This has had a direct consequence on almost all their industries. Employment as well as entrepreneurship has reduced. A case in example is slower permissions for opening multiplexes and cinema halls in India. This led to many films remaining unreleased and consequently a fewer set of opportunities for the artist. A common artist or a film worker may work harder today but his opportunities will be much less than the years when the industry was being rapidly opened for more entrepreneurs. In his lack of understanding of policy issues, the common man finds himself blaming nepotism for his plight and asking for tightened control of the private sector!

Developed countries have gone to the extent of making the private sector almost completely a parallel existence to the government. While in underdeveloped or a developing country, for private sector leaders, the government is the boss. The world has openly witnessed how social media giants have openly deified presidents in America off late. This freedom, in a way, shows why America is the fulcrum of the world economy and will remain so. In poor countries, the only people who can do business in a big way are those who are in the good books of the government.

In fact, one way in which a government in an underdeveloped economy can show its interest in economic revival, is to openly allow dissenting entrepreneurs and artists to grow big.

Any country which decides to open-up their economy should convince their government to create more economic freedom for private enterprise for a few more reasons. One, contrary to making the position of the heads of the government less attractive, in fact, their position becomes even better. Such government heads are welcomed more easily by not only those who seek them for favours but also media as the country starts doing favourably well in more parameters. Two, a richer country has less social unrest. Their social unrest are more easily handled than those that start in poorer countries. One can see so many protests happening against governments in France, America, United Kingdom and so forth. But, the unrest in poor countries is much grimmer and always leads to a bitterly recollected legacy as soon as the government steps down, whenever it is.

Link to the book: