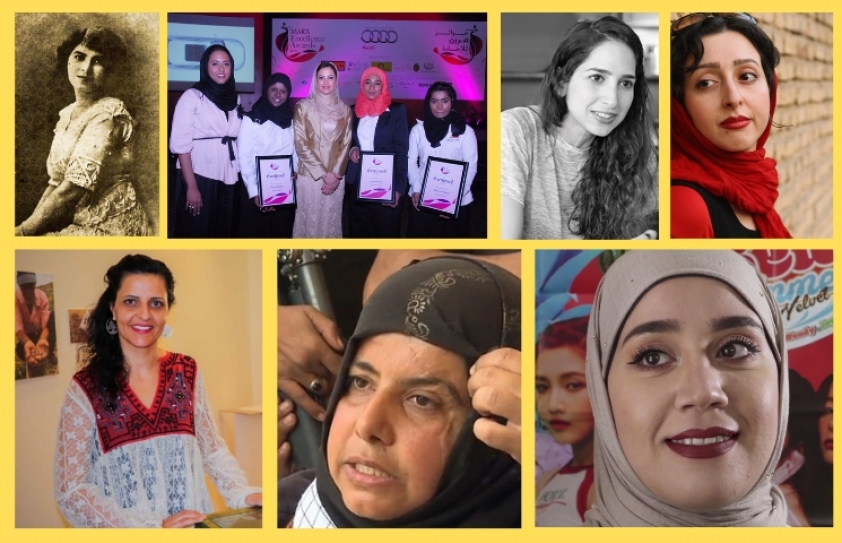 Stories of seven inspiring women from the Middle East

On marking the International Women’s Day, Al Jazeera has compiled a list of must-see documentaries on women across the Middle East focusing on their achievements, challenges, and dreams. From the “first Arab feminist” in the 20th century to a Palestinian woman leading a quiet farming revolution, to a female militia commander on the hunt for the Islamic State of Iraq and the Levant (ISIL or ISIS), and to the Saudi designers making strides in the fashion industry - the stories come up as an icon of strength and motivation.

May Ziade: The Life of an Arab Feminist

Marie Elias Ziade, or May, was a Lebanese-Palestinian figure in the Arab literary scene in the early 20th century who firmly established herself as a vibrant female voice in what was clearly a man’s world at the time. She is widely known to be the “first female Arab feminist”. She was a journalist but also wrote fiction with strong female characters, poetry, political and cultural books and magazine articles, often on the condition of Arab women.

May questioned the social norms and cultural values of the period. She wrote: “We chant beautiful words in vain ... words of freedom and liberty. If you, men of the East, keep the core of slavery in your homes, represented by your wives and daughters, will the children of slaves be free?”

She played a pioneering role in “introducing feminism into Arab culture,” according to writer and critic Hossam Aql, who credits her as being “the first to use the term ‘the women's cause’ ... She was the first professional writer to take a critical approach to women's stories or novels written by Arab women.”

Bird of Dawn: The Composer from Tehran

Sara Najafi is a young composer from Tehran. In 2011, Najafi hosted a public concert featuring the best contemporary Iranian and French female singers, despite of the ban of the public performances by solo female vocalists in front of men in Iran since 1979.

To stage such a concert, Sara had to coordinate the busy schedules of the performers as well as secure the agreement both of the Iranian culture ministry and the religious authorities. Over three years, the film traces her progress, the highs and lows as agreements are issued then revoked, permits offered then declined, forcing Sara to start the process all over again. The film is a fascinating and dramatic film, giving deep insight into modern Iranian voices and views.

Saudi Arabia has made global headlines for extreme sides of feminist activities. Young entrepreneur Basma Bouzo is the cofounder of Saudi Design Week, an event that seeks to foster local talent and create opportunities for designers. She has brought in interior designer Wadha Rashed to manage the installation of the event.

But running the fair is burdened with challenges in a kingdom steeped in religious patriarchal traditions. The film explores how they’re opening up the reclusive kingdom through this unexpected field.

ISIL: An Eye for An Eye in Iraq

For over three years, ISIL controlled and terrorised large swaths of northern Iraq. Then, after it was militarily defeated by the Iraqi army and international forces in late 2017, local militias took over short-term responsibility for law and order in some of the areas ISIL had relinquished. They began searching for fugitives, and their alleged civilian collaborators who came into their hands.

The commander of one of the most reputedly vengeful of those militias was a 40-year-old woman, Wahida Mohamed al-Jumaily, also known as Um Hanadi. She and her 80-man force had played a key role in driving ISIL out of the area and had shown their utter determination since then.

The Seed Queen of Palestine

Inspired by memories of her grandmother and the delicious food of her childhood, Vivien wants to reintroduce long forgotten Palestinian produce to the tables of people across the West Bank and beyond. And she believes this organic, climate change-resistant seeds are the key to that.

She experiments with growing the treasured seeds in her own and dreams of reviving and celebrating Palestinian food culture. She sets up a travelling kitchen, taking her seeds and their produce on the road and reminding Palestinians of the power of food to capture the joy and beauty of home.

In 2011, four young Omani women decided to break the mould, challenge stereotypes and learn to sail. In a sport dominated by men, Rajaa Mubarak al-Owaisi, Entisar al-Tobi, Raya Rashid al-Habsi and Asrar al-Ajmi made up the crew of al-Thuraya under the support of Oman Sail.

The four young women were part of a government initiative to promote the power of sport internationally, put Oman on the global map and revive the country’s maritime heritage.

The film follows Heba, a young Iraqi woman, on an emotional journey as she pursues her dream and goes in search of her place in the world, encountering seemingly overwhelming obstacles along the way.

Heba is obsessed with all things of South Korean. She uses Korean cosmetics, listens to Korean music, watches Korean dramas on television, cooks Korean food and has studied Korean Hangul with the aid of YouTube tutorials.

Heba represents a new and growing trend among young Iraqis who find in South Korea a vision for the future. While life in Iraq seems chaotic and unpredictable, South Korea offers them an enticing example of order and stability.