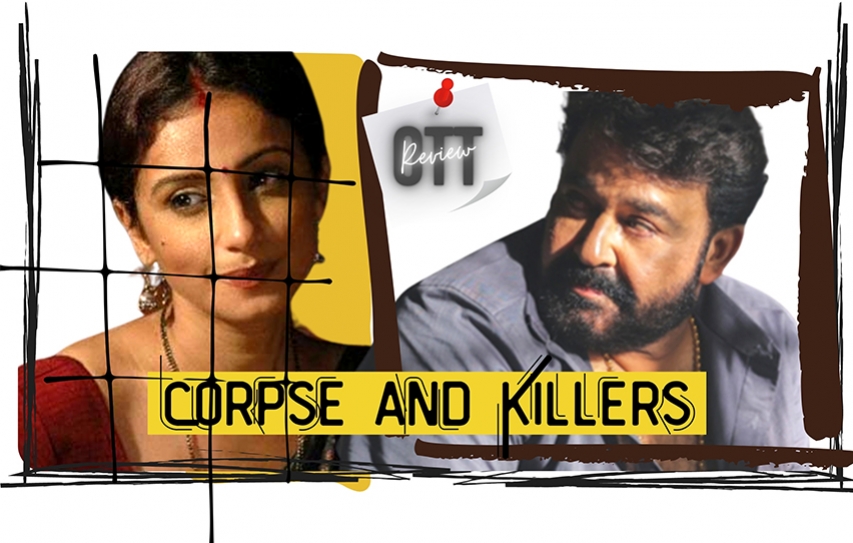 Khalid Mohamed has mixed feelings about the Mohanlal movie Drishyam 2, thumbs up three episodes in the anthology series Zindagi in Short… and more. 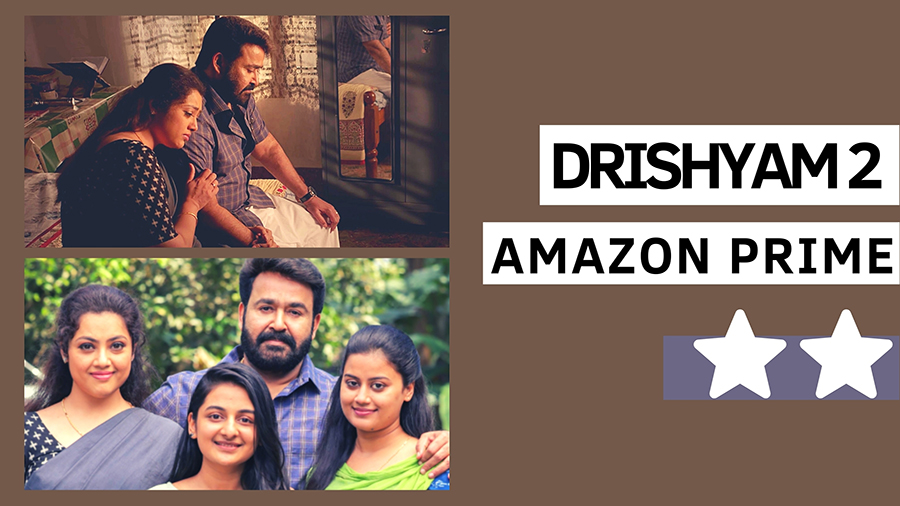 They’re playing corpse and killers here. No fears though, the murder-shudder mystery is fairly engaging, albeit majorly because of the contained-‘n’-cucumber-cool performance by Kerala’s superstar Mohanlal, who at the age of 60, carries the somewhat improbable screenplay on his shoulders as if it was a child’s play. Whether he’s being confronted by the cops or boozing in a stationary car, he never jars.

Now that’s a given, the actor is outstanding, cementing his reputation as an artist who can deliver the goods even when he’s surrounded by characters made of pure wood. That raved about, writer-director Jeethu Joseph’s Drishyam 2: The Resumption, isn’t exactly my cup of chai. Hai hai, why? Simply because the narrative goes here, there, everywhere amoeba-like before getting to the point towards the latter half of this 153-minuter, in the course of which you may be inclined to catch a quick catnap without missing the storyline’s supposed crackle-‘n-snap.

Thumbed up mostly by the reviewers as an apt six-year-later sequel to Drishyam (yes, yes, it was also reboiled in Hindi headlining Ajay Devgn), the outcome’s as endurable as skimming through a whodunwhat-‘n’-why paperback, for want of another more satisfying option in these straightened, endless stay-at-home days and nights. After all, this one’s the Big Ticket movie of the week in Malayalam, is embellished with decent subtitling, besides being piturised fluidly - under precautions against the coronavirus in Kerala’s river-flanked Thodupuzha and Cochi by cinematographer Sateesh Kurup.

Erm now for the backstory. The missing corpse is that of a young man who got way too sexually frisky with the elder of the two daughters (Ansiba Hassan) of our Georgekutty. The victim had killed him accidentally - she’s still suffering from severe trauma, and her family’s continue to be spooked. His body could be discovered anytime anywhere. Unless, of course, Dad Georgekutty has stored a trick or treat up his sleeve. Whee, till then his wife (Meena) is scared stiff, the younger daughter (Esther Anil) often throws a fit, although Daddy Cool is sure he possesses a fix-it tool kit. Surefire material for a super-hit.

Come to think of it Georgekutty is the only characterisation with a shade of difference. A struggling video cable operator earlier, he now owns Rani, a movie theatre, debt-ridden albeit, named after his wife. For in-jokes fleeting references are made to Malayalam cinema’s other superstar Mammootty, and his son Dulquer Salmaan. Chalo, no problem-o.

Snag is that at the outset the narrative, it is stuck in a groove making you yell out loud, “What next, fellas?” The point being re-established repeatedly is that Georgekutty is one helluva brainy tiger whose stealth and charm are sure to protect his family from an iota of harm. Ulp but the case is re-opened, scarlet red herrings abound and a skeletal body is found within the catacombs of the local police station. A creepoid, just-released convict, claims to be an eye-witness to that shudder-murder. And hang on, there’s more. Hells’ bells!

The raggedy friendly neighbours turn out to be a slick surveillance cop team. Right. So now at long last the script goes hammer and tongues to spew twists and turns, the township’s canteen is rife with rumours tastier than the banana chips consumed there - meaning the dragnet is closing in on the Georgekutty family, which is nervous-as-a-trembling autumn leaf. Worry flurry not though.

A wisdom-spouting script writer (Georgekutty had dreamt of producing a feature film with Mr Wisdom, by the way) who has a speechlet prepared, which I won’t give you a clue about. Reason: a sensational spoiler alert would be a reviewer’s professional crime.  Suffice it to inform that the window is left wide open for a Drishyam 3. Uh huh, or else how to ensure a hat-trick, no?

But for the slowpoke and then suddenly furious-paced editing, the suspense yarn is technically competent throughout. If I may add a word here about a spot-on advice from Alfred Hitchcock: “Never keep secrets for too long from the audience.” Give them leads, so they can go aha-I-had-guessed-rightly-or-wrongly when the dramaturgy winds up.

That cardinal rule is missing here. Tsk. Take the opening scene, for instance, when a certain Mary opens a tiny window for her suitor and he’s dragged away into the dark of the night. Wazzat? Okay, that’s explained way later but by that juncture, your curiosity has waned drastically. Plus why foist in a college boy who’s craving to direct a short film? That’s sorted too, reels later, a plant in the plot, which is overpopulated already with a swarm of avoidable flies in the ointment. Swat!

So, is it worth your while to stream into Drishyam 2. Sure, we can at least agree to disagree. Be that as it may, Mohanlal is a flawless diamond. Hence Drishyam 2’s  No. 1 star value keeps you hooked-‘n’-booked even though, sorry to say, the mystery recipe is indigestibly cooked. 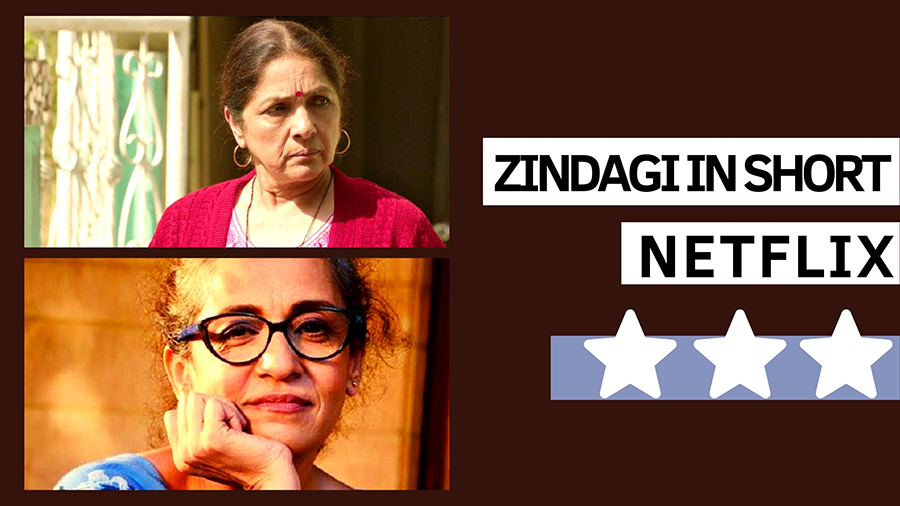 This seven-episode anthology, originally produced for FlipKart Video, is now on Netflix, its avowed aim being to give a break to fresh directors. Wonderful initiative that. Yet in the execution only three women-centric stories are the sort you’re likely to cherish – and that too for its bravura performances.

The kick-starter, Pinni, draws us close to a middle-aged house-maker who excels in rustling up sweets and couriering them to her grown-up children. Her husband couldn’t care a fig barfi though, the domestic aide constantly taunts her for her wasteful slogging in the kitchen, and boom, on her birthday, which no one remembers, understands that enough slavery is enough.

Directed by Tahira Kashyap Khurrana, here’s a salute to women who serve without ever caring for their own needs and aspirations. Delicately handled, the episode is enhanced by a thoroughly nuanced portrayal by the nowadays-prolific Neena Gupta.

The best if not the most angry episode revolves around a house-maker too, who drifts into an extra-marital affair with her brother-in-law, only to be threatened by him with a sex video to be posted on the social media if she doesn’t continue with the liaison. Finding herself in a corner, she cares a damn, and goes to the extent of accusing her husband (well-played by Sanjay Kapoor) of rape ever since their wedding night. Reflective of the #MeToo movement, director Punarvasu Naik extracts a super-dynamic performance from Divya Dutta. Here’s a shout-out-loud to Ms Dutta, that was terrific, take a bow.

Over to Rakesh Sain’s take on an ageing Parsi woman who’s believed to be a nut-job by her neighbours since she suffers from hallucinations. Fortuitously, Swaroop Sampat is in her element here. Her Parsi accent does falter but her emotional depth hits you with a walloping force.

The other four episodes, I’m afraid, just about pass muster. 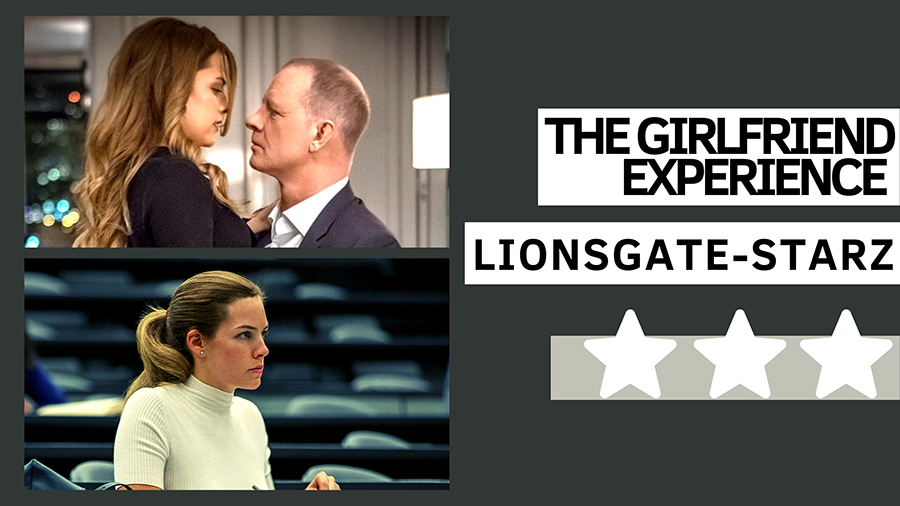 Under the stewardship of the eclectic executive director, Steven Soderbergh, the opening episode featuring Riley Keough, leaves a wow impact. Without being coy or apologetic, here’s a look at a top law firm of America where she finds a job as an intern supplementing her income by leading a double life as a high-class escort girl.

A revelation - adapted from a 2009 feature film of the same name - it tracks the sordid goings-on. The premise that senior executives  cheat and exploit the women to the hilt may not be exactly novel. Yet, the grime behind the glamour is exposed with the chutzpah of an investigative reporter. Worth a glimpse for sure.