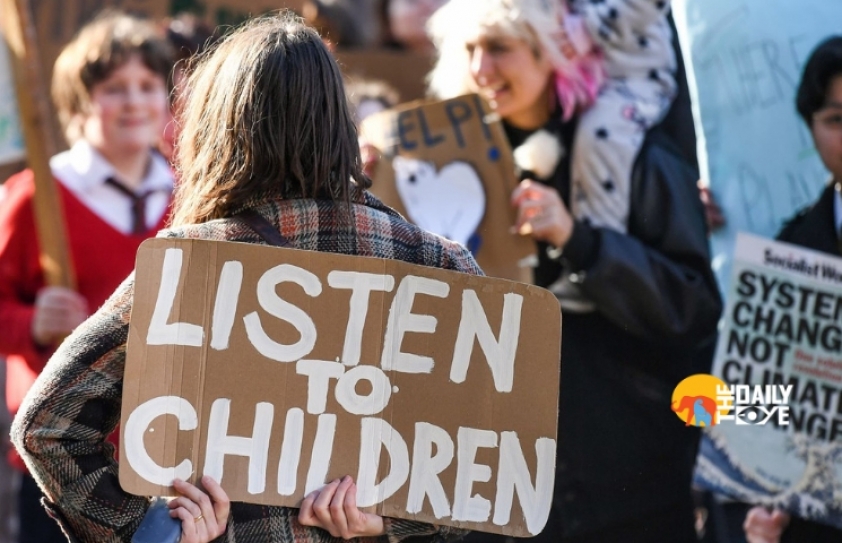 “Don’t burn our future,” protest thousands of students across UK

Thousands of youngsters hit the streets of Britain on the 15th of February (Friday) for some environmental action. Students from 60 cities and towns were on strike, demanding their governments to move quickly to solve climate change. The protest was organized by the UK Student Climate Network which is a rapidly-growing global youth movement.

It wasn’t done all at once; The Guardian reported a prior notice on the protest earlier last week. The movement started in August when a 16-year-old schoolgirl Greta Thunberg held a solo protest outside Sweden’s parliament. Despite of all those individual protests, a coordinated day of action was observed on Friday.

It is said that students were ditching school and flooding city streets from Manchester and London to the Scottish Highlands. These made the Prime Minister slam them for ‘wasting lesson time’. The Mail Online reports that three teenagers were arrested in London - two for obstruction of the highway and one for a public order offence. A 15-year-old girl was initially arrested for a public order offence, but was subsequently de-arrested. Some of the teenagers in Westminster stood on the statues of former Prime ministers David Lloyd George and Sir Winston Churchill at Parliament Square, with others carrying placards bearing Socialist Worker logos. Young people boarded an open top city tour bus, climbing to the top deck to bringing roads in the area to a standstill. Hundreds of pupils, holding signs, chanted ‘We're not moving’ as they blocked traffic from moving. The pupils later began to move away at 3.30pm - the usual time for the school bell - after bringing Whitehall to standstill. 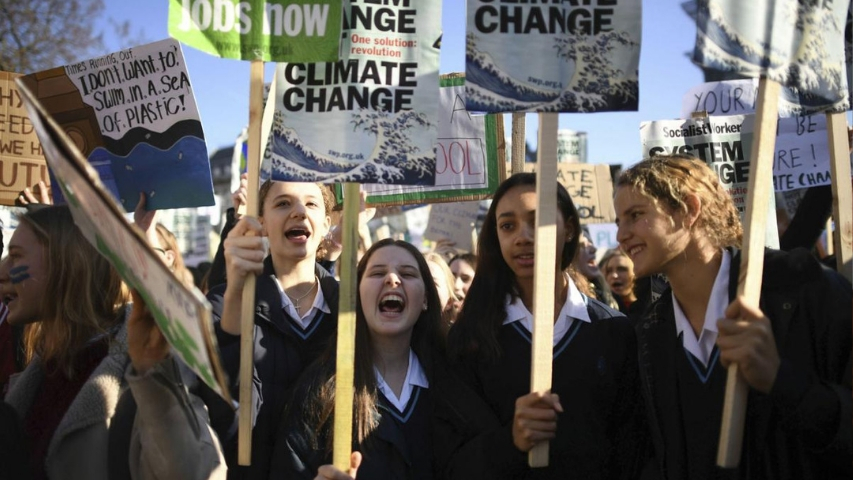 Green Party MP Caroline Lucas described the students as ‘inspiring’ as she joined a protest, but school leaders and Education Secretary Damian Hinds warned students they should not miss lessons to take part in the strikes. Parents were also brought to notice that they could be fined £60 if they allow their child to take an unauthorised absence in some areas where schools are under pressure from councils - despite others actively encouraging children to make banners and attend. Logan Wijay, a foreign affairs adviser, took the day off work to join his daughter to protest. He said, “We have to sort out this mess, I’m glad to be here with my daughter. She is the only one from her school, Francis Holland, Sloane Square.” Catherine Barley, 44, was protesting outside Number Ten with her two sons. She said, “I don’t think that anything else is working. The kids being off school works. There’s no excuse.” Some of the banners held by pupils read ‘Global warming isn’t cool’, ‘There is no Planet B’, ‘When did the children become the adults’ and ‘Don’t burn our future’.

The strikes come in the wake of a UN report which warned that limiting global temperature rises to 1.5C above pre-industrial levels, beyond which climate impacts become increasingly severe, requires unprecedented action. That includes cutting global carbon dioxide emissions by almost half within 12 years. They also want recognition that young people have the biggest stake in the future, should be involved in policymaking, and that the voting age should be lowered to 16.  One of the pupils, Nico, 13, said that protesting about climate change was not a ‘chance to bunk off school’, but a push for a better future. It’s our future and people in our generation should be fighting (for) what we’re going to be living through’. She said: “We started a petition at our school to get rid of the plastic cutlery because we think it's so unnecessary and it's bad for the environment. We're hoping that the Government will become more aware of it and start making a change.”

Alexandar Gyurov, 17, said he was at the protests in Parliament Square to “raise awareness for climate change and get a bit of a ‘move on’ in terms of getting governments to change their ways of acting and going with a greener approach to things”. “I think it's important to raise awareness about this problem and to put pressure on the Government and the people to take action now” he told.  Some students who spoke to the New Scientist during the protest said the media had to share some of the blame for the global failure to tackle climate change. Eddy Barrow, 15, of Elmgreen School in Tulse Hill, south London, told the magazine: “Climate change is a big problem that is being ignored by mainstream media. The MPs in parliament are not doing much. There will be rising sea levels, no more Antarctica, the climate will be destroyed. Loads of terrible things.”

Addressing a group of protesters outside the Council House, Cllr Ward said the authority would ‘stand shoulder to shoulder’ with the aims of young people across the country. Mr Ward said: “Just yesterday I was down in London talking to the Government about their need to provide local authorities up and down this country with powers and the resources to get people out of their cars and into modern public transport powered by electric or hydrogen.”

“We all have to do our bit,” Mr Ward said. “I think it's fantastic to see young people taking an interest in this issue. We have only got one chance at this. There is nowhere else we can go and live.”

Energy minister Claire Perry told BBC Radio 4's programme: “I suspect if this was happening 40 years ago, I would be out there too. I'm incredibly proud of the young people in the UK who are highly educated about this issue and feel very strongly - quite rightly - that we do need to take action because it's their generation that will bear the consequences. I do want to slightly caution that with the more official view that we can't put any more burdens on our superb teachers and teaching staff.  I do hope that anyone missing school today does get their work and their homework done.”

All these actions were brought to notice quite earlier than expected. Greta had earlier confronted world leaders with the movement’s demand for radical climate action, first at a climate meeting in Poland in December where she accused them of acting like irresponsible children; then in Davos for the World Economic Forum when she told the gathered global elite that the climate crisis was real, adding: “I want you to panic.” There isn’t any motive that the change must happen in one day, but the only goal is waking up the government to voice out the serious threats the planet is going to face.