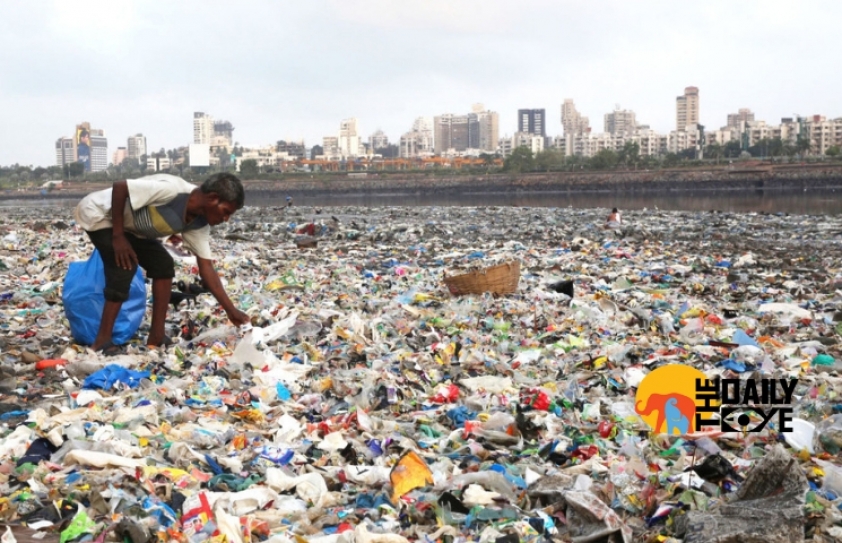 India follows China in banning the import of plastic waste

The Economic Times reports that earlier, such an initiative was just held partly as the country did not prohibit it in special economic zones. “The country has now completely prohibited the import of solid plastic waste by amending the Hazardous Waste (Management & Trans-boundary Movement) Rules on March 1,” an environment ministry official said.  The ministry also attributed the ‘huge gap between waste generation and recycling capacity’ in the country as one of the reason for the complete ban. Officials said India’s “commitment to completely phase out single-use plastic by 2022” was one of the reasons for the new amendments. 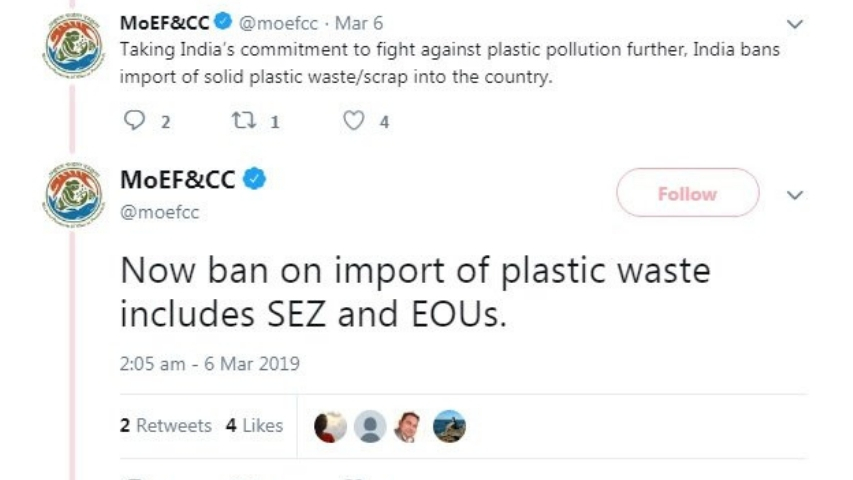 Tweets from the MoEF&CC on the ban of plastic scrap imports.

China had banned the use of plastics a few years ago. The increased imports of solid plastic waste to India were a result of China’s complete ban on importing such waste. China was the largest importer previously and the vacuum left by it was occupied by countries such as Malaysia and India. Since there is no adequate capacity of recycling of plastic waste in the country, a huge quantity of such hazardous waste remains uncollected, causing substantial damage to soil and water bodies. According to a study conducted by the Central Pollution Control Board (CPCB), 10,376 tonnes (40%) out of the 25,940 tonnes of plastic waste per day remains uncollected in the country. In January, it was reported that India’s plastic imports had increased from 12,000 tonnes in 2016-17 FY to 48,000 in the 2017-18 FY. While India has recycled a higher percentage of its plastic waste than most countries, 44% of its plastic waste is still not recycled. The rising imports only made matters worse.

Satish Sinha, associate director at non-profit Toxics Link, said after China banned import of plastic scrap early 2018, there were apprehension of increase in imports to Asian countries as the US and European countries don't have enough capacity to recycle plastic. “I really don't see this will have drastic impact on livelihood of people in the industry. India generates enough plastic and major chunk of recycling is handled by informal players,” said Sinha.

Manoj Mishra, convener of Yamuna Jiye Abhiyan and a former forest officer said plastic is number one enemy of environment and there was no case ever anytime to import scrap plastic. “This should be taken forward to even ban the single use plastic through the country. There is no justification on livelihood linked to it as it is a poison and directly connected to health of people engaged in the sector,” said Mishra.

The other rules under the initiative mentions the white category (practically non-polluting or very less polluting) of industries, will have to hand over hazardous wastes generated in their units to authorised users, waste collectors or disposal facilities. The white category of industries contains 36 industrial sectors such as air-coolers, air-conditioners, biscuit making, metal caps, handloom and chalk-making, among others.  The amendments also brought certain changes in trans-boundary movement of electrical and electronic components and silk waste.  “Exporters of silk waste have now been given exemption from requiring permission from the ministry” the ministry said. Similarly, electrical and electronic components manufactured in and exported from India, if found defective, can now be imported back into the country within a year of export, without obtaining permission from the environment ministry.