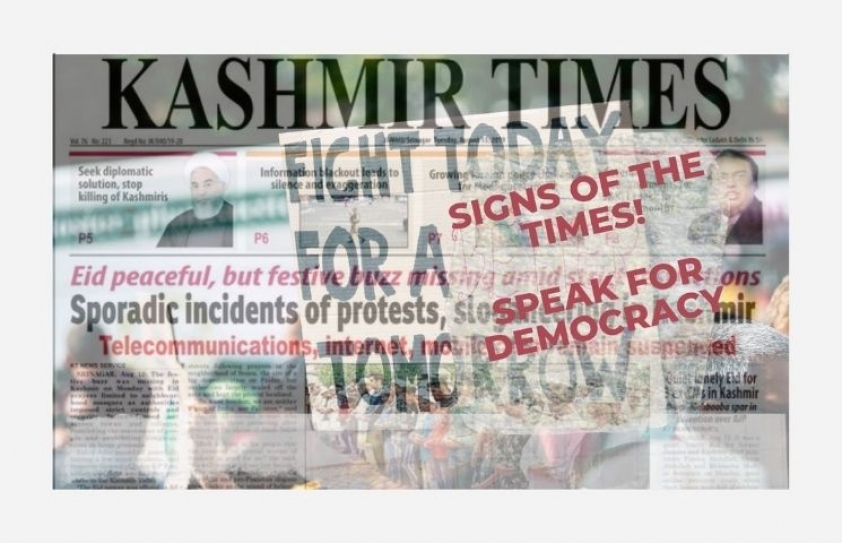 Though nothing really surprises in the fascist times that we are destined to be  living in, news of the sealing of the Kashmir Times office in Srinagar did  shock, writes Humra Quraishi

Yes, it came as a jolt. After all, it was a vibrant newspaper office trying to hold out, trying to battle against all possible odds, trying to  bring news and reports of ground realities to us. But then, perhaps, the  government of the day doesn’t want readers to know what’s really going on in the conflict zone.

It’s clear that the executive editor of  the Kashmir Times,  Anuradha  Bhasin  Jamwal, has been targeted for a long time now, and her  publisher husband, Prabodh Jamwal, as well, because they have been strong and courageous, have not succumbed to pressures. They are amongst the handful who have tried to keep afloat against a turbulent tide. In the times of today this is a rare feat because the consequences are mostly severe. Advertising is withdrawn, offices and government allotted homes of the journalists are sealed and cases are slapped!

One should not also forget that journalists reporting from the Kashmir region have been often booked for reasons usually unknown. It is tough and risky to report from the Valley and I salute all those trying to bring news-reports to the rest of us. In fact, the Kashmir Times is one of those publications, which has consistently focused on human rights violations that were taking place. Anuradha’s father, the late Ved Bhasin sahib who was also the founder of Kashmir Times, had told me very categorically that he wanted his newspaper to focus on the people living in the Kashmir region and what they are going through. I had met Ved Bhasin sahib at least three times in the Kashmir Times office in Srinagar and each time he sounded concerned about Kashmir and its inhabitants. And, I’d also heard him speak at seminars that were often held in New Delhi.

I recall the first time I met and heard him speak in 2007, at a day-long  seminar held in Jamia Millia Islamia’s Academy of Third World Studies,  where he’d said, “There is an atmosphere of distrust and fear. All kinds of human rights abuses are taking place. As long as the Draconian laws stay, there will be a sense of insecurity among the people. No dialogue can take place in this climate of distrust and fear. How can normalcy return in this atmosphere?”

And in the books based on his life and times  -  Vedji & His Times - Kashmir: The Way Forward, Selected Works of Ved Bhasin, there’s an entire chapter titled Jammu and Kashmir: Road Map for Dialogue, where this veteran  journalist had listed several Confidence Building Measures (CBMs), which could prepare ground for dialogue to take off. However, there’s also a note of caution in it and to quote, “It needs to be emphasized that there can be no ‘peaceful negotiated settlement’ of Kashmir without the full and active participation of all sections of the people of Jammu and Kashmir living on both sides of the divided line. No solution should be imposed on the people of J&K and it should emerge through a process of multilevel dialogue.” 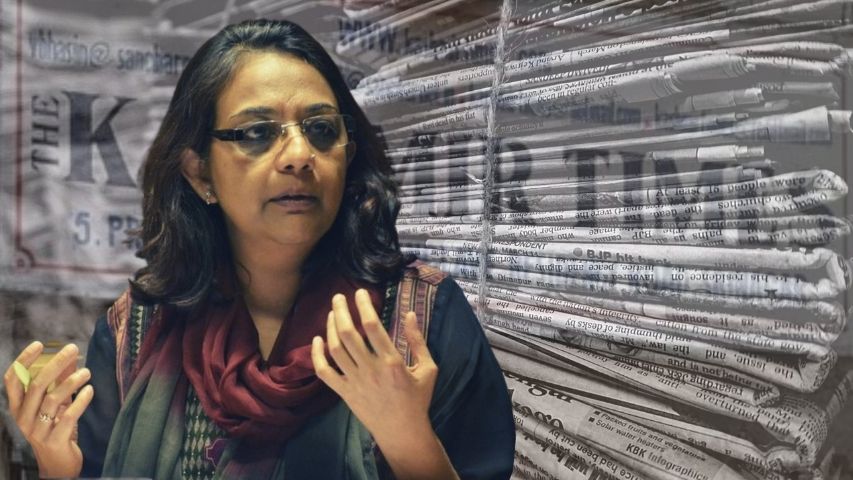 The fact is that journalists and photo-journalists in the  Valley  have always  faced hurdles. In 2018, I had heard the head of the journalism  department of the Islamic University of Science and Technology (IUST, situated on the outskirts of  Srinagar – in Awantipora), Dr Ruheela Hassan, speak at a seminar held at Jawaharlal Nehru University (Centre for Media Studies), focusing on the difficulties faced by the journalists in the Valley. She had said, “The struggle of the media in Kashmir throughout its evolution is witness that the media in Kashmir has never enjoyed real freedom. Be it the Dogra Rule in 1924, nationalist government (1947-1953), Sheikh Abdullah (1948 - 1953), Ghulam Mohamad Bakshi (1953-1963),  Ghulam Mohamad Sadiq (1964-1971) or National Conference (1975-1982 and 1986-1990), media in Kashmir has never breathed in free air. At one time, the state was resistant to granting permission and when permission was granted, their freedom was curbed, strict laws and regulation like Jammu and Kashmir Press and Publication Act of 1932 were introduced and implemented to ban publications, seize printing presses or demand heavy securities from the journalists. After India gained independence, it guaranteed freedom of speech and expression to all its citizens including the citizens of the State of Jammu and Kashmir but nothing changed for the press. Older laws were amended and new laws were implemented to muzzle the press. The inordinate circumstances in Kashmir from the 1990s, further worsened the scenario. Not only the freedom of expression was endangered but there were now increased threats to the life of journalists. Their freedom of movement and right to access information was also snatched. Several journalists lost their lives and many were put behind bars. Journalists also fought several battles with the state; some struggles they won - withdrawal of Press Bill by state - and some they lost.”

Today, of course, the challenges stand compounded. With journalists and their homes and newspaper offices and news agencies getting so blatantly targeted, it’s time for us to wake up. Yes, its about time to say stop to those against the rights of common people and journalists who report on day to day events taking place. If we don’t stop them from suffocating the truth and from vilifying those who speak it, then we will create a world full of hate and lies - at present there are many who are standing up for democratic values, tomorrow, there will be none left. This is the time to speak for democracy. This is the time to make demand for our freedom to speak,  to express and to breathe.

I’m leaving this piece, with a verse from writer–journalist-commentator Nilofar Suhrawardy’s latest book - This is Love! Poems on Love, Anguish & More’.

Life is… I have heard/Hanging from a thin thread/A moving pendulum, which is so weighed down by tensions, that it is just blowing winds of time that vibrate it slightly to and fro/And… Life is for me an emptiness I can’t combat, an awareness of a hollowness everywhere, in everyone all around me/I detest it/But something tells me, eventually that hollowness will eat into me, gnaw away the very roots of my existence, my values, whether I fight it or not/I know the hollowness will seep the life out of me/And it eventually maybe my death too…”