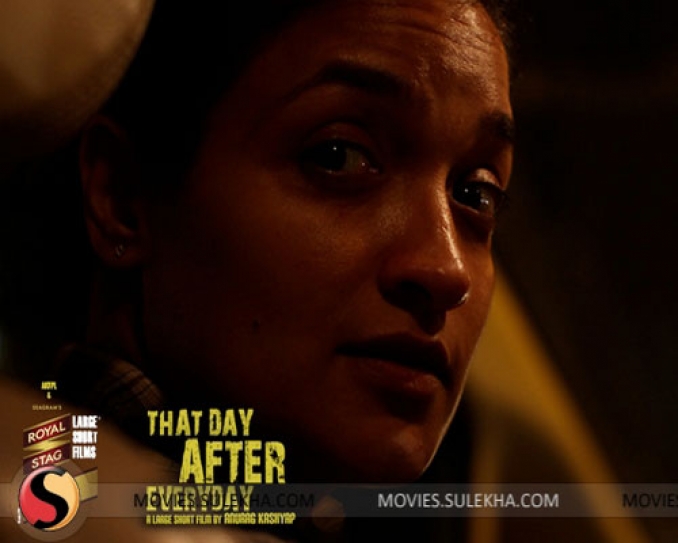 The Day After Everyday or Krrish 3: Which will allow us a superheroine?

Less than a week after it was uploaded, Anurag Kashyap’s short film, The Day After Everyday, has had 1,205,910 hits (and counting). In over 21 minutes, Kashyap shows us how three women decide they’re not going to take harassment — or “eve teasing” as it’s commonly known — lying down.

The heroines are Radhika Apte, Arannya Kaur and Geetanjali Thapa. They’re three everyday, unremarkable women (if anything, they’re a little too pointedly unmade up in order to proclaim their ordinariness) who become extraordinary when, inspired by their cigarette-puffing self-defense teacher (Sandhya Mridul), they beat up the men who have harassed them. A crowd gathers during the climactic fight, but no one helps them; not even their teacher. Soon it becomes evident they don’t need any help bringing the men down.

Since last December, when the Delhi gang rape made headlines, many celebrities have taken to publicly declaring themselves cheerleaders of strong women. Cynics will say it’s become something of a fashionable trend which, like most fashionable trends, is mostly hollow posturing.

Optimists will point out that this has meant more people talking about issues that were previously brushed under the carpet and made feminism (or at least a marshmallowy version of it) cool to those who had earlier dismissed it. It’s quite evident that Kashyap meant his film to be a middle finger salute to Indian misogyny. Ironically, however, The Day After Everyday’s most vocal detractors aren’t men who feel oppressing women is their birthright, but women.

In Business Standard, a woman writer who identified herself only as “A disappointed fan” explained in detail why The Day After Everyday was regressive rather than progressive.

“So that, according to you and your scriptwriter, is why we women continue to be victims of harassment every day. It is because we don’t think we are strong enough, because we have not made up our minds that we need to fight back, because we do not feel “ready”. Damn. I could have sworn it was because we live in a chauvinistic, patriarchal society where men are encouraged to treat women as objects and to give them no respect, a society where sexuality is repressed even in the 21st century and allowed no healthy outlet, where governments and the police force have failed, time and time again, to protect its women.”

Kashyap posted a comment in the article, accepting the criticism. “It was done very fast , and there was very short time, not that it should have been an excuse. In retrospect we never thought it would go viral and we should have thought that,” wrote Kashyap. He also apologised and said, “Wasn’t the intention and yes we could have done better.”

In the blog Mahal Movies, Shruti Narayanswamy, made similar observations. “The Day After Everyday is a lot like the films of the vigilante woman-revenge genre: empowering on the surface but quite unhelpful and sensationalist on closer examination,” wrote Narayanswamy. Aside from the problems of glorifying violence and offering an unbelievably neat happy ending, the film also ignores the more subtle and constant examples of misogyny in India. As Narayanswamy put it: “Some forms of harassment and intimidation are so insidious that you don’t even know if you’ve experienced them or not. And it’s these experiences that happen to women everyday.”

The website The Ladies‘ Finger praised The Day After Everyday for its acting, music and production, but pointed out that the film failed the Bechdel Test: “What it lacked in purely elemental terms was three women bonding over something other than pernicious patriarchy – a conversation that did not circle around men … .”

A quick look at the comments that The Day After Everyday has got on YouTube and you’ve got to wonder whether, considering the majority of India’s movie-watching audience, the film isn’t being too harshly judged.

“Women has to come out traditional patience in order to do this, Yeah!” says Shankar Bm and many want The Day After Everyday to be shown in schools and on TV so that women and girls are inspired by it. This is a film in which women react violently to being ‘teased’ — a staple feature of wooing on Bollywood — and still, it gets more likes than dislikes. This is quite something when just the sight of the word ‘feminism’ is usually enough to bring out Indian trolls. Kashyap’s depiction of urban India is undoubtedly simplistic, with its insistence that mental strength is more important than muscle power, strong women who smoke and don’t wear make-up, warrior women who can overpower decidedly heftier men and misogynists who see the light when they witness their wives can pack a punch. However, at least Kashyap let his women fight and win. It’s a fantasy, yes, and fans of Kashyap understandably expect him to be more insightful and rooted in reality. However, considering what passes for fantasy in the terribly chauvinist world of Bollywood, perhaps Kashyap’s simplistic pipe dream deserves a little indulgence.

The latest Bollywood release to enter the Rs 100-crore club is Krrish 3. It’s an obvious fantasy flick, in which people fly and rays of sunlight look like glowing straws. The only rule from reality that applies unfailingly in the Krrish universe is that women can’t be heroes.

Consequently, Kangana Ranaut’s Kaya can shape-shift, walk through walls, execute superb ninja moves against powerful fighters, carry off ridiculous, body-hugging costumes, but she can’t be allowed the spotlight. In real life, Ranaut almost stole the spotlight from Hrithik Roshan with her delightful interviews, but there was little chance of her stealing his limelight on screen.

Glory in celluloid is for Hrithik’s Krrish and Rohit. Rohit, who doesn’t have much to praise his daughter in-law about until she’s pregnant (who cares if she’s a successful journalist?). Krrish, or Krishna, is a dude who can’t tell someone else is impersonating his wife (back in Hindu lore, this same mistake led to Ahalya being turned to stone) and whose examples of heroism include detecting ice cream theft and disentangling idiotic children from electric wires.

Kaya, on the other hand, is capable of espionage, falling in love, realising the error of her ways and enormous sacrifice (that ultimate romantic gesture). But in order for Krrish to be the Mister Awesome in this fantasy, Kaya has to die. Not just that, while the camera and story lingers over Krrish’s every injury, Kaya’s death is swiftly over, even though her villainous moments were given a fair share of slow-mo and close-ups. Basically, either remember her as the baddie or cast her into the trash can of Those Who Didn’t Make It.

It’s a fantasy, but here, there’s no space for a superheroine. Not even in the future, as is obvious from the end of Krrish 3, when a son is born to Krishna. If he’d become the father to a daughter, this revelation would deserve a spoiler alert. But in a franchise about an extraordinary man fathering a superhero son, it’s no surprise that the next generation of this fabulously gifted family is also male. It’s both predictable and no doubt rooted in reality, considering the Roshans’ unfailing promotion of only the men in the family. Truly fantastic would have been Kaya becoming Krrish’s crime fighting partner, or Krrish becoming a father to super twins (a girl and a boy) or — brace yourself — a daughter. But there’s no space for that kind of fantasy in mainstream Bollywood, it seems. For that, we have to turn to the flawed, simplistic but gung-ho and not-quite-real world of The Day After Everyday.