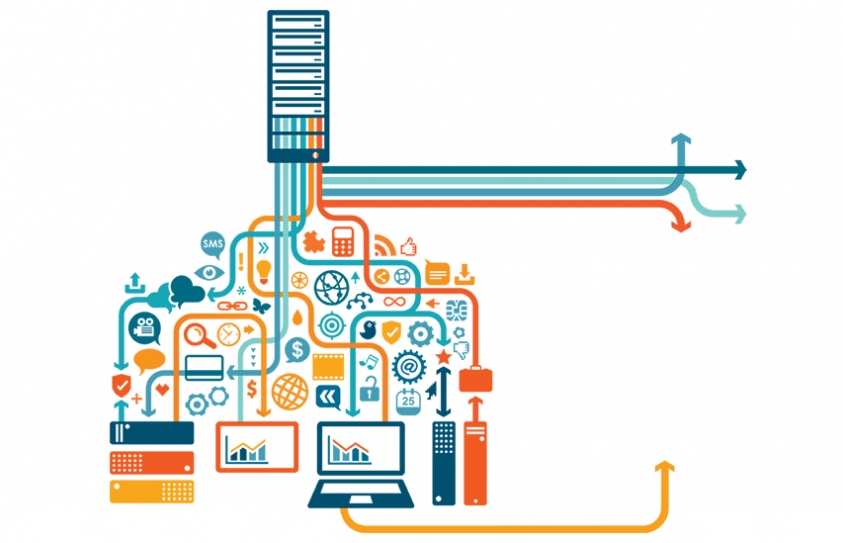 ‘Our ancestors created their myths and told their stories for a human purpose. Any good story, any good novel, should have a message’, wrote Chinua Achebe, the Nigerian novelist and critic. In his seminal work Things Fall Apart Achebe provided the first alternative to understanding African society as complex and enlightened rather than the ‘heart of darkness’ his predecessors had made it out to be. He challenged the so-assumed constructive influence of Western colonization, and in doing so empowered a continent to take a look at itself with a new, confident gaze. Achebe’s texts are a core prescription across African schools and beyond, and have encouraged a reconsideration of what the gain and bane of the imperial age may have been. Good stories, he believed, could well be responsible for the paradigm shifts through which man progresses in evolutionary succession.

Stories are key tools of behavior change for they can motivate introspection and action. Harnessing the power of a tale, fictional or non-fictional, has often been used in books, films, and television for the purpose of social development by promoting specific messages through its characters, themes, and storyline. Entertainment-Education, as the taxonomy goes, investigates how the audience understands and engages with a particular issue, and then designs targeted messages within the content to promote change in thought or behavior through the characters and storyline. The process relies on using audience research and insights as well as reviewing the socio-psychological underpinnings of a story and its effects. By doing so it encourages a greater likeliness to create effective and impactful content addressing the social issue in question.

The pioneer of promoting thought and behavior change through media communication was a psychologist named Albert Bandura. Bandura’s research, demonstrating how people were influenced by a character’s actions, language, and tone, spawned a series of telenovelas in Latin America in the 1970s; the most well known of these wasSimplemente Maria. The show, a story of a young single mother in Peru named Maria, who rose from rags to become a fashion designer teaching herself stitching on a Singer sewing machine and enrolling in literacy class, was marked by its purposely-designed high level of character identification and observational learning for viewers. It was enormously successful both commercially and socially encouraging a drastic rise in young women enrolling in literacy classes and in the sales of the Singer sewing machine. Meena, a comic book series in South Asia created by UNICEF themed on adolescent girl empowerment and rights, became notably popular with children in India, Bangladesh, Pakistan, and Nepal. The creators having spent significant time researching the issues with children were able to craft characters and incidents that would influence their young readers in specific ways. 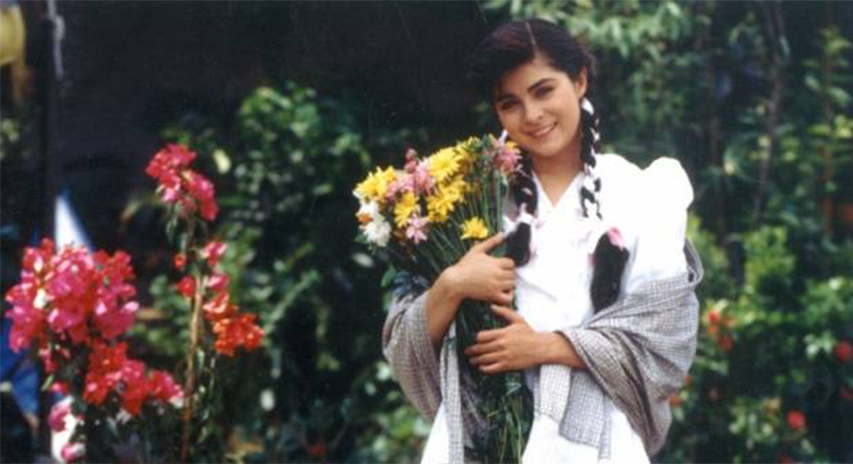 While Bandura’s work did encourage a growth in entertainment-education, the uptake and extent of such initiatives has remained limited. One reason for this is the difficulty in monitoring and assessing the intended impact on thought and behavior.Simplemente Maria was unique in its ability to have the change marked in quantitative terms, such as an increase in the literacy class enrollment and sewing machines sales. But not all social development initiatives have such measurable outcomes. While theMeena comic books proved popular, the project goal of girl empowerment was wider than that and far harder to objectify making it difficult to conclude the success of its methods. While art, literature, and cinema have played a role in influencing society since time immemorial, knowing the definite good or bad effects of a work can be rare. Do Disney princesses give children the gift of fantasy or do they incorrectly lead to gender stereotyping? Did the Dark Knight teach us more about the need for human trust or did it increase our tolerance for the violent and radical? A popular prime time TV show in India re-creates in drama format real stories of rape and violence from small towns and villages. While on one hand the show has been lauded for increasing awareness on safety issues, on the other it has been condemned for creating a sense of paranoia that in turn creates it’s own negative externalities, such as a decrease in the freedom of a girl to travel for education or work. The net effect to a large extent, without systematic impact assessment, remains indeterminate.

If targeted social development is the specific purpose behind the creation of a media piece, then there is a need to incorporate a structured process of impact study. What was the viewership size and demographic? What did the audience think during and after exposure to the media piece? How was their behavior influenced as a result of the show? What action at a community or civic level did this translate into? The methods of such investigation and assessment in the field of entertainment-education have so far largely remained qualitative such as in-depth interviews, focus-group discussions, immersive participation, and tracking various forms of offline action. The inevitable fallacy of relying largely on qualitative research to study thought and behavior change is the number of biases in human judgment and decision-making that it is subject to. The World Bank Report for 2015, titled ‘Mind, Behavior, and Society’, expounds how mental models created by development professionals are often based on imperfect information, assumptions, retrofitting, and incorrect correlation between cause and consequence that ultimately affect the impact of development. Decision-making theorists such Tversky, Kahneman, and Thaler and Sunstein have written in recent times of how the human mind see’s what it wants to, ignores probabilities, and makes judgments from small numbers without evidence. For example, if the first three tosses of a coin are heads most people will believe that the fourth will be a tail while the probably yet remains precisely half. Or for example if someone is repeatedly exposed to frequent stories of children killed by gunmen on television they are likely to believe children are at a greater risk from gunmen than true. This is especially pertinent to entertainment-education professionals working in the difficult intersect of messaging based on research and creative story writing. To mitigate the effect of such thought-biases on development solutions, the World Bank Report emphasizes the need to innovate methods such as those existing within the marketing and consumer industry that help gain clearer insight of the thinking processes and decision-making of target groups. 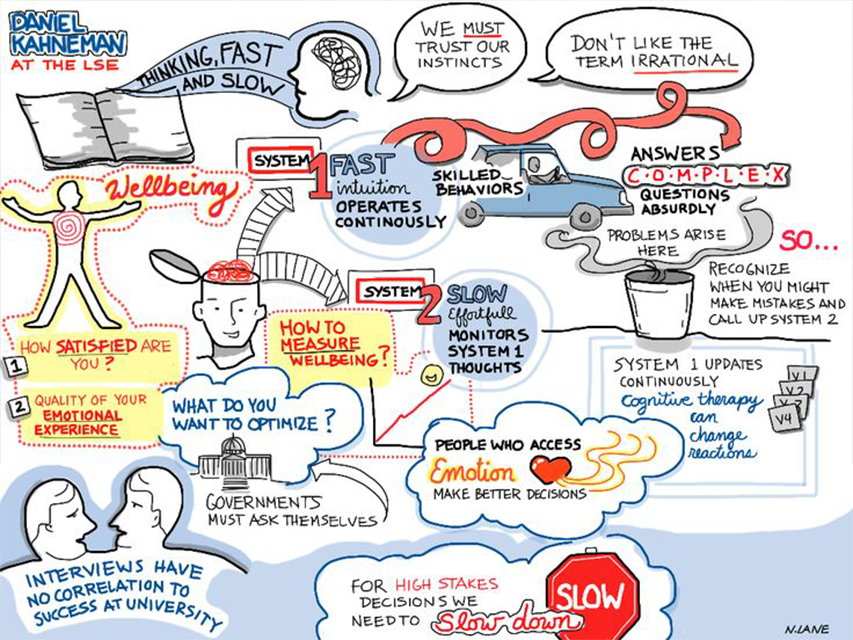 Kahneman – Thinking fast and slow illustration
While qualitative research in entertainment-education has been accompanied by a degree of traditional quantitative methods such as surveys and pre/post designs, the rise of the Web 3.0 providing access to social network feedback, web analytics, online action, and various forms of Big Data has opened up possibilities to understand and influence human behavior in revolutionary ways. Extrapolating observations from one sample group to a larger audience with qualitative techniques is difficult, but there may be much more scope in scale and size for research as well as impact assessment with a serious quantitative approach. Individual behavior may be unpredictable, but as Leonard Mlodinow explains, when data are collected from groups and analyzed en masse regular patterns emerge. Analytics have begun to form the base of day-to-day decisions in many industries already. From financial trading and business optimization to sports analysis and healthcare planning Big Data is the buzzword everywhere. The advent of these rapid changes, as often happens, has been followed by reproach of overhype and overvaluation. This may well be the case with unknown variables such as inhibitive costs or a shortage of quantitative skills, but even if we don’t know the pace or how much it will stumble in the process, the direction is undeniably set. Given the ability of powerful computers to crunch vast databases and compute algorithms with a sophistication that allows them to be ‘objective observers’, the earlier the development sector embraces the approach the faster and greater the gains in efficiency will be.

Numbers can provide honesty to stories. Their patterns can tell you what your story message needs to be to have an impact rather than you employing a subjective opinion to decide that. Data can reflect the reality of an issue as it exists while a story can convey why it’s important. It can go yet many steps forward to tell you who actually thought the story was important, why, and how this may have affected their decisions. Participant Media, founded by former e-Bay President Jeff Skoll, uses data to track online conversations and offline action resulting directly from the release of it’s socially relevant films such as An Inconvenient Truth, Syriana, Darfur Now, Lincoln, etc. This data is turn fed back into ground campaigns as well as future message creation. The conversations encouraged for example from their movie Food Inc. that investigated the perils of corporate farming in America, were tracked and the results fed into further community and legislative campaigns that eventually led to policy change in food safety and administration. The Harmony Institute in New York and the Media Impact Project at USC Annenberg create data tools for media companies to assess the action-taken and behavior-change impact of media pieces across individuals, communities, legislation, and the effect on national discourse. They also help define with precision the factors that entertain audiences by closely tracking viewership, traffic metrics, and attention minutes, allowing a successful syncretism of entertainment and social education. Such data collection and mapping helps establish a communication loop and feedback mechanism between media and society on a large scale, creating enhanced knowledge of how thought and behavior change can be influenced.

Since the most primitive of times stories have played a role in human evolution through myths, legends, and religion. Creativity in art, cinema, and literature cannot be substituted, but supplementing it with method helps magnify it’s potential to speak to the world. Entertainment-education can have widespread influence on behavior and thought and is an immensely powerful tool for development. Supporting qualitative insights with large data can help understand the reality of an issue, the behavior of people around that issue, and the content of messages to address the issue. By evaluating the subsequent changes and effects and feeding the insights back into story creation, there is an attempt to set a cycle of ameliorating rationality and honesty. The use of media in the modern world has ranged from the extreme propaganda of the 20thcentury to the exaggerated consumerism of the 21st; perhaps this may be a way of restoring or creating anew a medium for social progression.